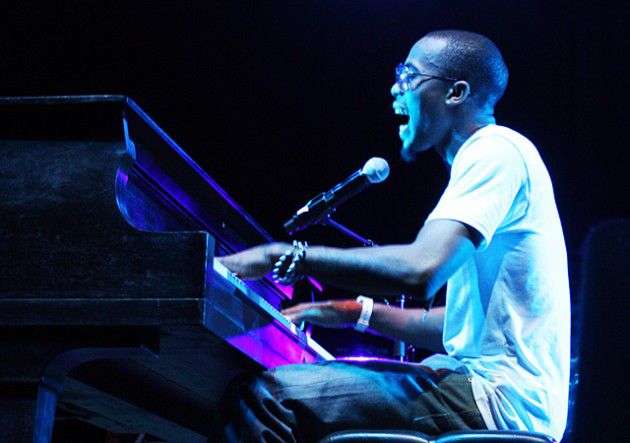 Year after year, Villanova students clamor for an on-campus concert that brings the house down. Depending on whom you ask, that hasn’t quite happened in the past couple of years, but this time, Campus Activities Team decided to do things differently.

The “Save the Holidays Benefit Concert” took place Tuesday night in an unusual venue — Jake Nevin Fieldhouse — featuring an artist who does things differently himself: Atlanta’s own 22-year-old hip-hop sensation, B.o.B.

“We thought we could do something like Hoops Mania,” says Ryan DaPonte, CAT president. “That’s kind of an expensive event, so we wanted to do something that also gives back to the surrounding community and helps people. That’s really the perfect blend of everything we try to do here.”

Regarding the particular charities selected, the choice was simple.

“The Randy Foye Foundation obviously has a connection with Villanova Basketball, and it has a great reputation,” DaPonte says. “The North Light Community Center in Manayunk has been working with Villanova’s RUIBAL program for years, and we appreciate that connection and wanted to further the relationship, so we thought they would be a great charity to help out.”

After polling the student body over the course of the semester, CAT came to the conclusion that students were looking for a more upbeat performer, and after B.o.B received a high percentage of votes in the polling, they knew he would be a perfect fit.

Depending on how successful “Save the Holidays” is deemed, it could turn into an annual fling for the holiday season at Villanova.

“We would like to start a yearly benefit concert around this time, working with the same charities,” Dapointe says. “We’re hoping this year is successful and we’re going to look forward from there.”

After the rousing performance, B.o.B sat down with The Villanovan for an inside look at his journey to the top of the charts.

CL: What was it like growing up with the Atlanta music scene? Did local artists, like OutKast, influence you?

B.o.B: Being in Atlanta, regardless of what you listen to, you’re always influenced by it just by living there. Everything that comes on the radio kind of rubs off on you. I remember working at a Subway by a gas station when I was, like, 14, and I would always hear every song that was popular on the radio over and over. I remember when [T.I.’s 2003 album] “Trap Muzik” came out, everybody was “trappin'” out at the gas station. It was so crazy because the gas station almost turned into a club. That really influenced my music a lot.

CL: Since you’re a multi-instrumentalist and singer as well, do you take offense when critics label you a “rapper”?

B.o.B: Not really. If you say “Christmas tree,” it could be a Christmas tree — it’s a tree, but it’s an evergreen. Not every tree is an evergreen. It stays green year round, but not every tree stays green year round. It’s like, you can label me one thing, but I can do this too, or I can do that too. For me, it’s not really about just multitasking; I gravitate towards doing the things I do, so it kind of just happens.

CL: How did your collaborations with Rivers Cuomo on “Magic” and Haley Williams on “Airplanes” come about?

B.o.B: With Rivers, that was basically just a song idea. It was challenging because, listening to it, I didn’t just want to do the generic rap on a pop or rock song. I really wanted to take it and make it mine. I got in the studio with Dr. Luke, who produced the record, and we just really built it from there. I actually wrote tons of verses for that song, but we just took the best parts and pieced it together. Some of the stuff I wrote, it could have been bad, but it came out good.

I didn’t meet Haley until after “Airplanes” came out. It had like 10 million views [on YouTube] and I still hadn’t met her. It was crazy. But we went and opened for Paramore in the UK, and Haley’s really cool, really down to earth.

I think chemistry is what makes a song good when it comes to artists collaborating. Even though we didn’t meet, I think with the type of fans that Paramore attracts and that I attract, there’s a common passion for music there.

CL: Is there an artist you would love to collaborate with in the future?

B.o.B: I would have to say a band…probably Beach House. I haven’t seen them live…I need to go to a concert. That’s what I gotta do: I got time off. I gotta get to a concert.

CL: You’re nominated for five Grammy awards this year. What does that mean to you after all the hard work you’ve put in to your music?

B.o.B: To me, a Grammy is more about the music than about the popularity contest. I obviously wouldn’t have received [these nominations] if I didn’t have an album out, but it’s kind of like a victory to me because I spent so long trying to get my album to come out. I dropped mixtape upon mixtape upon mixtape that I felt were good enough to be albums, but to actually finally have an album out, and then to be nominated, it feels like I got my just due, I guess — but not until I bring the Grammy home.

CL: How does playing for a college audience differ from a regular show?

B.o.B: For me, it’s my age group. I’m 22, so with most college crowds…I forget how old I am, honestly. As long as everybody’s having fun, I forget. So for me, with college crowds, performing doesn’t feel like a job, it just feels more like a party.