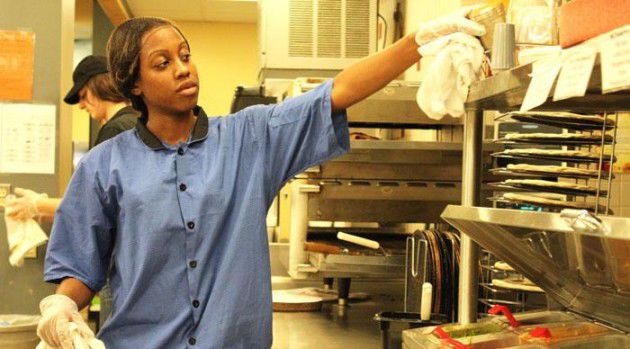 Davida Peterson laughs as Nick Chiaverini playfully pushes her toward the door, urging her to sit down and answer my questions.

“Come on! It’ll be fun!” he encourages.  She laughs again and concedes, leading the way out of the kitchen of 2nd Storey. Even in the brief 20 seconds I spent with the two together,  the camaraderie was very evident. She sits down shyly, then looks at me expectantly. Once the pleasantries were out of the way, I asked her whether she was close to her co-workers, and immediately a bright smile spreads across her face.

“They’ve made me open myself up more,” she admits. “I’m usually shy, but around them I’m more open. We’re always cracking jokes back there…it’s what gets us through the long nights.”

Peterson grew up 10 minutes away in the town of Sharon Hill, with four sisters and a brother.

“We’re close. I see them daily, even though I live alone.”

Born and raised in Pennsylvania, she is a football fanatic. “I’ve always liked football.

When I was younger, my brother played and I used to cheer for a little league team, so I was always into it. I love the Cowboys, “they’re my favorite team,” she says. Her love of football may very well stem from her eight years of cheerleading. Peterson was a part of the LCI Blue Devils, led by the University’s own cheerleading coach, Phil O’ Neil.

“I was part of an all-star team from 2000 to 2008,” said Peterson. “Our team won six national jackets from cheer and we got to travel a lot. I still go back to LCI sometimes to cheer.”

When not cheerleading and working, Peterson strives to relax. Indeed, before working an eight-hour shift at St. Mary’s, she likes to catch up on rest.

“Eat and relax. On a good day I might go shopping, but mostly I like to relax before work,” says Peterson. “I watch “Love and Hip Hop,” “Pretty Little Liars” and ‘Jersey Shore,” even thought it kind of sucks now.”

As she reflects on a standout memory from her time here, she laughs and shakes her head, overwhelmed with the possibilities.

“There’s always something happening back there,” said Peterson. “It’s never a dull night.”