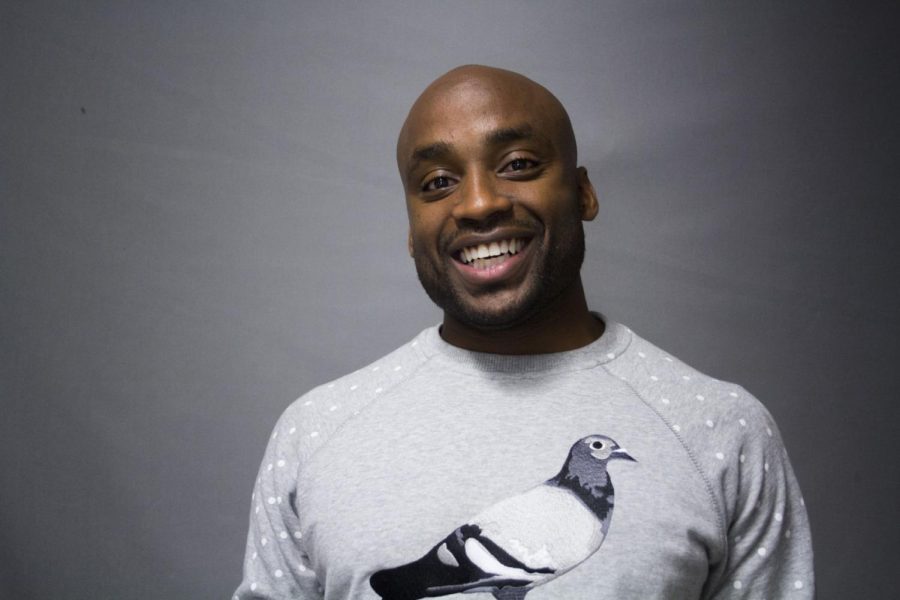 Javon Johnson got into poetry because of, like so many other pursuits in a high school male’s life, a girl. “A young woman I went to high school with said to me, ‘Yo, I heard you write poetry.’ I was like, ‘What?’ and she was like ‘Yeah, that’s so sexy that you write poetry,’” Johnson recalls. “I was like ‘I totally write poems.’ I went home that night and I wrote my first poem.”

From that first poem Johnson, a native of Los Angeles, has created a career in writing and poetry, and specifically in poetry slams. This literary life has brought him around the world, and now to the University to take part in a poetry slam put on by the Center for Mulitcultural Affairs on Monday and Tuesday night. The first day consisted of a preliminary round of poems, while the second had Dr. Johnson conducting a poetry workshop, judging the finals of the slam competition and performing some of his own poems.

In high school Johnson participated in speech and debate programs and read the writings of Langston Hughes and Amir Baraka, two authors he counts as some of his strongest early influences.

In college, he continued to participate on speech and debate teams and was also given the book “Burning Down the House,” which is a collection of poems from the Nuyorican Poets Café’s 1998 National Poetry Slam champions.

Johnson focused heavily on writing just like these accomplished poets early in his career, something that he feels is perfectly acceptable for a young artist to do.

“Imitation is what artists do,” Johnson says. “I’m not one of the people who think ‘Oh, you need to be an original voice from jump. That’s crazy. I’m one of those people who think that copying someone is a great place to start, but it’s a terrible place to finish.”

Johnson, who describes himself as having always been a performer, be it in church halls or school debate tournaments, feels that the performance act of poetry at poetry slams brings poetry from the classroom and into the people.

“The thing that happens in poetry slams a lot is you hear and see the passion behind it,” he says. “That what you feel is good, is good. Period. I don’t need an academic breaking down every stanza, every line, every line break.”

“It gave poetry back to the people, in a way that academics didn’t allow for. And I think that’s partially its popularity, that the only thing you need to know if poetry is good, you don’t need formal training you just need to know ‘Do you like it?’ and ‘How much do you like it?’”

Johnson believes in D. Soyini Madison’s idea of the “performance of possibilities,” which states that, as Johnson put it, “I’m not saying one performance may or may not change the world, but I am saying that one performance can spark the kinds of dialogue that can lead to material change.”

He manifests this belief through his writing, much of which focuses on racial and gender inequality.

This serious approach has brought a wide range of reactions to his work, ranging from outright bigotry to strangers asking him for a picture in Target to strongly-worded, all caps emails to legitimately constructive conversation.

“That’s an amazing feeling, that somebody is like, ‘Yo, you created something that moved me.’”

Johnson thinks there are three tenets that young poets should focus on. The first is to truly spend time honing one’s craft, be it through reading, writing or performing. “Perform so much that you’re comfortable being uncomfortable on stage,” Johnson says. “Then write more than you perform, then read more than you write. Think of writing as a conversation. You can’t talk all the time, because then what are you listening to, who are you learning from.”

The second tip is to be as good of a business person as you are an artist. “You cannot be the only person in the business of art not concerned with the business of art, because that’s the easiest way to allow somebody to make a lot of money off of you,” Johnson adds.

Finally, Johnson believes that a young poet should surround themselves with a competitive, supportive artistic community.

“Colleges work that way. The way colleges and universities work is that they bring intellectuals together to push each other,” Johnson says.

“Get a bunch of creative people together and push each other, you’d be amazed at how far you’ll go.”