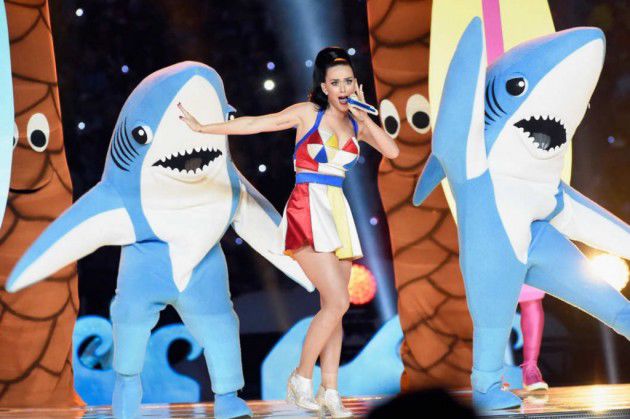 After much anticipation leading up to Katy Perry’s performance at the Pepsi Super Bowl XLIX Halftime Show, the moment fi- nally arrived last Sunday at the University of Phoenix Stadium in Glendale, Ariz. If you haven’t already heard, Perry’s dancing sharks were just one of the big highlights of her show.

The singer kicked off her 12-minute set by strolling in atop a blinged-out, giant animatronic lion while performing her hit song, “Roar.” Perry shone bright in a fiery orange and yellow outfit designed by Jer- emy Scott and a pair of sparkly silver heels, just the first of four outfits she would wear throughout the show. Talk about a powerful opening to her performance.

Some of the millions watching the live set went straight to Twitter to react in particu- lar to Katy’s outfit choice. BuzzFeed staff member Tanner Ringerud posted the article, “16 Things Katy Perry Looked Like Dur- ing Her Halftime Performance,” in which Ringerud compared Perry’s flame get-up to everything from Pokémon Emboar to Will Ferrell in “Blades of Glory,” to a Hot Wheels car to a bag of Flamin’ Hot Cheetos.

After her grand entrance to “Roar,” Perry transitioned to another of her smash No. 1 hits off the Prism album, “Dark Horse.” With the use of a high-tech projection system, it appeared that the Super Bowl field turned into a fantasy-like, three-di- mensional world with a breathing, moving chess board. Acrobats dressed in costumes straight out of “Zenon: Girl of the 21st Cen- tury” flipped alongside the award-winning vocalist while she welcomed her first guest of the night, Lenny Kravitz.

The iconic pair collaborated to Perry’s “I Kissed A Girl,” with Kravitz, who gave it a rocker edge, donning ripped light wash denim jeans, a slick leather jacket, golden necklaces and a pair of orange tinted rocker shades while strumming his jet black guitar.

But the next section was arguably the most talked about. Making her first outfit change, Perry jumped into a flirty beachball themed crop top and high-waisted skirt, with a matching microphone, of course. The stage transformed into a breezy beach scene that made viewers feel like they were right on the West Coast as she belted “Teen- age Dream” and “California Gurls” which has been compared to Channing Tatum’s hallucination from “22 Jump Street.” In- stead of bringing out the dancing lobsters like Amanda Bynes did on “The Amanda Show,” Perry brought out the dancing sharks, and they instantly became the talk of Twitter.

Memes popped up instantly all over the Internet, with many already claiming that they’ll be sporting the shark costume for Halloween 2015. Maybe Discovery Chan- nel should add a new show to its annual Shark Week lineup: Katy Perry’s Dancing Sharks. There were also smiling beach balls, dancing palm trees, surfboards and floating clouds that added to the scene.

As if Perry wasn’t enough, veteran rap- per Missy Elliot jumped on stage perform- ing a medley of some of her most popular hits, including “Get Ur Freak On,” “Work It” and “Lost Control.” Elliot, backed by a group of dancers wearing “Missy” jump- suits that resembled a NASCAR driver’s, kept the party bumping in the stadium with her throwback set that made us all feel like we were back in 2001. But viewers totally loved it and are probably downloading Missy’s throwbacks on their iPhone 6’s right about now.

To cap off the entertaining performance, Perry rose up from midfield in a gorgeous, star-studded gown (that probably only she could pull off) while flying on a shooting star platform around the stadium singing her empowering hit titled “Firework.”

As one could probably guess, fireworks started exploding left and right outside of the venue in a grand fashion. Perry waved to the crowd as she circled them to cap off her energetic extravaganza. Let’s just say, Katy Perry brought it all for Super Bowl XLIX.