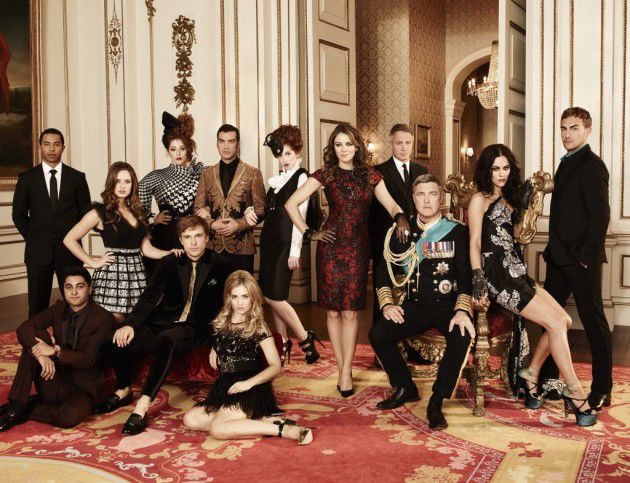 Sunday March 15, E! revealed its first scripted series, “The Royals.” Though the show is scripted and we would be fooling ourselves to think that this is actually how the real royals act, there were some striking similarities. Plus, it can’t hurt to pretend that the real royals really are that scandalous.

The Premise: A rather dysfunctional family is trying to cope with its son’s tragic, albeit mysterious, death. This family just happens to include the entire English monarchy, which, if the King has his way, may be abolished shortly.

The Cast: Queen Helena: Elizabeth Hurley plays the biting and entitled Queen of England who is in close competition with the Wicked Stepmother in terms of parenting skills. Though style and beauty wise Helena may bear a resemblance to our image of a modern day Diana, Princess Di would never have been as manipulative and cruel as Helena.

Prince Liam: Liam is the second born son to Queen Helena and King Simon. As a result of the death of his older brother, Robert, Liam has switched from being the spare to the heir in a matter of moments and is already encountering the limitations of being the heir to the throne. He has also sparked a romance with a commoner.

The resemblances here speak for themselves. Liam is Prince William. He is the noble and (mostly) responsible one in the family, that cares dearly for his misunderstood relatives, but also for the people of his country. He desires to have a normal life in which he can love whomever he chooses, and will not allow his title determine his future happiness or love life.

Princess Eleanor: The troubled princess is the bane of her mother’s existence. She is constantly being flashed across tabloids in promiscuous, and oftentimes illegal, situations but secretly seeks her family’s approval. Though she has made mistakes and rebelled against her unchosen regal circumstances, her actions stem from a deep loneliness that comes with the crown. You can already tell that she has a heart of gold and will be the one we love, feel sorry for and are embarrassed for all at the same time. She’s a classic Prince Harry. Without having to worry about actually becoming Queen, she is able to live her life more freely and find herself without so much weight on her shoulders. Her partying ways and indiscretions bear striking similarity to those we have witnessed with Prince Harry. Vegas anyone?

King Simon: It’s tough to get a good read on King Simon yet, but he seems to be the heart of the family. Royalty is in his blood, but he has never wished that to be so. He has watched the throne destroy too many people and his son was the last straw. Much to his wife’s dismay, he proposes the abolishment of the monarchy. Though we don’t know too much about the personal lives of Prince Charles or Prince Phillip, I don’t think there are too many similarities here. We all know Prince Charles has been dying to be King since he was four years old and would never dream of abolishing the monarchy. And I would be too scared to even think of that in the presence of Prince Phillip (really a terrifying man).

Ophelia: The higher ups at E! knew what they were doing here. “Let’s make the prince’s love interest American! Then everyone will think they have a chance!” Well…it worked. Ophelia is the daughter of the King’s chief of security, which presents some roadblocks for her romance with Prince Liam—especially if the Queen has anything to say about it. Though her father is of English descent, her mother, who has recently passed away, was an American. She is feminine and charming, yet strong and independent.

She is obviously everyone’s favorite commoner turned princess, Kate Middleton. Kate Middleton is living a real life fairytale, and it’s looking like Ophelia may be following in her stylish L.K Bennett footsteps. She is fierce, unafraid, kind and loving—just like our girl Kate.

Consensus: It won’t be winning any Emmy’s anytime soon, but it is for sure our new guilty pleasure. The perfect end to this weekend, this royal family welcomes us in to witness and judge their debauchery in a way we can with the real monarchy. This show will undoubtedly spur our obsession with Will and Kate to a new and unhealthy level.