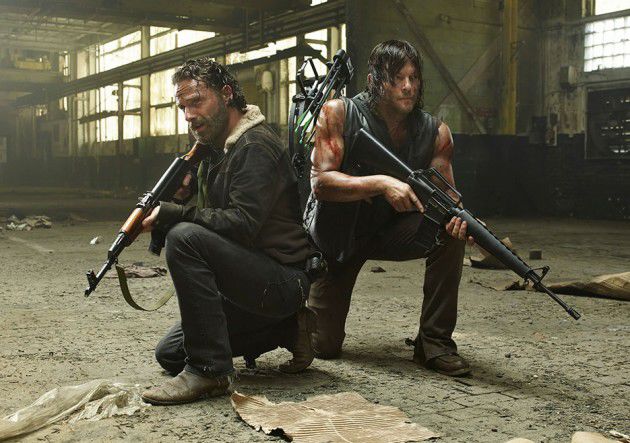 It is uncharacteristic of television series to improve with age. Anyone would be hard-pressed to find a television series that had its best season nearly five years after its premiere. Season Five of “The Walking Dead” not only defies this logic, it shatters it. Coming off the heels of a polarizing fourth season, season five began with Rick Grimes and his ever-expanding group trapped within the unfriendly confines of a supposed sanctuary, Terminus. Fans of the show will recall this with a sense of bewilderment, as this has been by far the most action packed season of the show, taking our group from Terminus to a dangerous hospital in Atlanta and finally to the Alexandria Safe-Zone in Virginia. The combination of improved pacing and strong performances from the cast allow “TWD” to shine in its fifth season, with its most compelling arc of its five year run.

Last year’s dark finale found Grimes at his darkest point, with his deteriorating sense of humanity at its lowest. Over the course of the series, the characterization of Rick has left viewers confounded, as his occasionally poor decision making and cold-hearted demeanor left many wondering if he would be fit to lead the group (and therefore the show). However, Andrew Lincoln’s masterful turn as Rick this season should eliminate all the concerns, as his disappearance into the role and the depth he gives Rick has certified him as one of the best actors on television. Elsewhere, fan-favorite Daryl Dixon lived to fight another day. It was widely believed Daryl would be killed off by the show runners, as many felt that Daryl’s character development was complete and he had nothing else to prove. However, it seems that Norman Reedus’ charm was just too much for the show’s writers, as Daryl will return in all his crossbow-wielding glory. It’s difficult to talk about Daryl without mentioning his closest friend, Carol.

While Daryl may be the most developed character in many fans’ eyes, Carol has been the most compelling. When we first met Carol, she was a soft-spoken victim of spousal abuse, too afraid to be a valuable asset to the group. The events of the apocalypse have ignited a change in Carol, as she has evolved into a true survivor and one of Rick’s most trusted confidants. Daryl and Carol’s interesting bond has been one of the strongest features of the show, as both are victims of abuse and initially struggled to prove themselves. Fans clamoring for a romance between the two may have to wait, as there hasn’t been any indication of the writers taking these characters in that direction.

The producers of the show seem to have heeded the warnings and complaints of their fans, using this season to make vast improvements to the show. The mobility of the group has been a breath of fresh air, as the stagnation of previous seasons had left fans restless and impatient. The trek from Georgia to Virginia was engaging and ominous, and the arrival of the group in the Alexandria Safe-Zone and the introduction of Aaron were some of the best storylines in the show’s history. Additionally, “TWD” has struggled with portraying their antagonists effectively. While the Governor was both a terrifying and compelling character, many felt he overstayed his welcome on the show, with his role being dragged on into the show’s fourth season with much protest from fans. This season has seen more villainous characters alone than all previous seasons collectively, from the Terminus leader Gareth to desperate cop Dawn to the mysterious “Wolves.”

The show had hinted at the Wolves for some time, and its simple yet terrifying introduction to two members of the group in the finale effectively set them up as the primary antagonists of the forthcoming sixth season. The show proved much more capable in handling the introduction (and subtraction) of characters this season. While the show’s introduction of characters introduction seemed clunky or out-of-place, this season’s newcomers seemed to fit in much more organically, specifically those in the Alexandria Safe-Zone. In addition to these characters, the show brought  in Morgan Jones, the fan-favorite who saved Rick’s life in the show’s inaugural episode. After teasing Morgan’s return throughout the fifth season, the show held up their promise to bring him back in the season finale as Morgan was introduced to Daryl and Aaron, who brought him to Alexandria. This season was not without its departures, including (spoiler) fan-favorite and moral compass Tyreese. Tyreese’s final episode, “What Happened and What’s Going On,” was the highlight of the season, as actor Chad L. Coleman’s emotional performance made it almost impossible to say goodbye.

Season Five of “The Walking Dead” proved without question to be the show’s best. Through stellar performances from its talented cast and improved writing, “TWD” demands to be taken seriously, and seems to finally have everyone’s undivided attention.