A first person account of Independence Day abroad in Spain 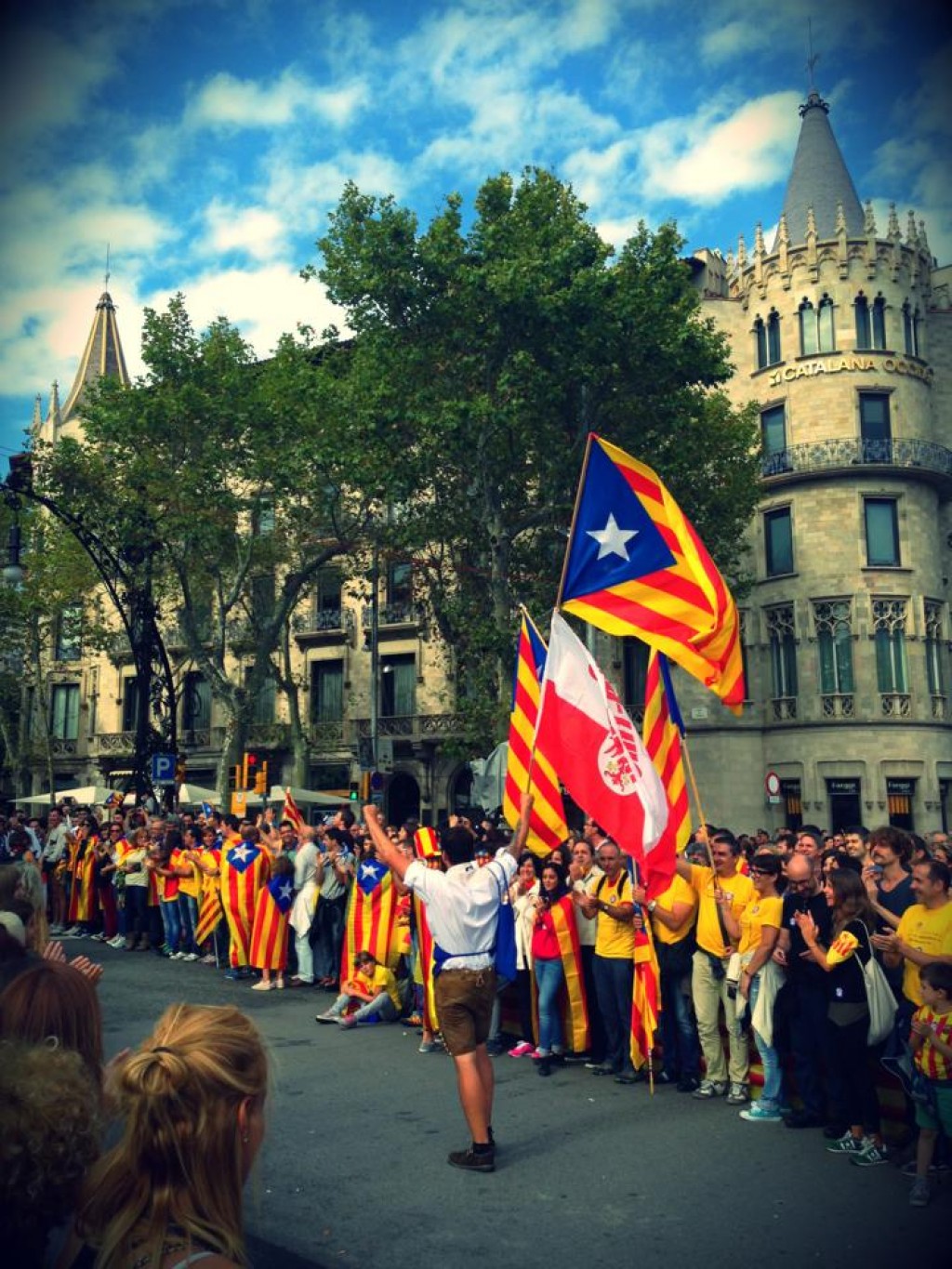 Scarlett and gold banners lapped in the warm breeze as I stood in the middle of Plaza Cataluña on La Diada, better known as the National Day of Catalonia. There were more flags than empty space, and the cries of excitement served as oxygen for the cause. People were chanting songs of which I did not know the words, so my friends and I tried to mimic the tune. Our claps were off beat, but it was not for a lack of trying. We looked around both uneasily and with excitement. This was the first time since I had arrived in Barcelona that I felt like I was separate from what was around me.

On this day just a year shy of 300 years ago, the Siege of Barcelona ended the War of Spanish Succession with the defeat of Catalonia. Barcelona failed to hold the last stronghold of its independence, so every year they commemorate those who fought and gather to resurrect the movement together.

This year, however, was special. The crowds were massive and bustling with a communal fervor that radiated through the ground. Our classes had been canceled not only because of the holiday, but also because the entire city was at a massive standstill: the pro-independent citizens were forming a human chain around Barcelona, and they made sure that part of it led through the heart of the city, right by where I stood.

The people were laughing and screaming like a wildfire dancing beautifully across a dry grass field. It was simultaneously a celebration of their culture and a call to arms for their independence. This year’s economic stress had reached its peak. Resentment has grown against the Spanish government as the fiscal rift had shaken the country past its breaking point, and Catalonia felt, as the most economically powerful region of Spain, like they had been carrying the weight of Spain on their backs, and had a solid argument for independence.

Before I had arrived in Barcelona, I thought that the city was inseparable from the tourist trinkets and matador culture that I imagined Spain to be as a whole. In fact, weeks later I would learn that bull fighting was outlawed in 2010 in Catalonia, and that a lot their people did not identify themselves with the burly mascots of the Spanish culture.

Standing there, I was slowly able to piece together the chants. They were in Catalán, the regional language, but I was able to give a general meaning to the foreign words thanks to my knowledge of Castellano. As I watched people climbing lampposts in revelry while others waved frail arms to the sky, I realized that the call for independence was nothing new to my arrival. This had been occurring for hundreds of years, and standing in my white shorts and cobalt blue shirt, I came to the realization that I had no connection to this march, and that this colorful parade was really an organized moment of history that was not, as I had imagined, a cultural show for me to partake in and enjoy.

Through the chaos of the crowd, I saw some girls walk by to my right whom I recognized from my study abroad program. Draped in brand-new flags haphazardly tied around their necks, and carrying miniature Catalonia flags that were still stiff from the plastic packaging, they danced around laughing to the beat of the drums and the tempo of the words to which they did not understand. They were taking candid photo shots of each other dressed in the colors of their host country, amongst the crowds of fiery-hearted people who were peering at the spectacle that these girls were creating of their monumental day.

These Americans looked ridiculous, and I hoped that they wouldn’t recognize me.

I felt a tightness in my stomach that I hadn’t felt since my days back home in Puerto Rico when my bumbling, cherry-pink relatives would visit us and insist on seeing the sights. On these uncomfortable weekends, my cousins would single handedly dismantle the identity that I felt we as a family had, for 15 years, carefully construed as ex-pats trying to acclimate to our new home. Thanks to their fanny packs and disposable cameras, I felt the glare of an unwanted spotlight cast by those around me. I wanted to hide them in my house and keep them there, and when my parents played along like tourists themselves, I felt betrayed. It wasn’t until that day at La Diada, among the vast plains of red and gold, that I realized that there was always a cultural glare cast upon me, whether I blamed my cousins or not, and that the image of “otherness” is not shed by the shade of my hair or accent of my Spanish.

I took the metro back to my apartment alone, while my other friends continued to explore the march. I could not erase the image of my classmates using a political demonstration as a social media backdrop. I leaned my forehead against the glass of the window to cool my flaring skin. Those girls did not see themselves as aliens visiting a foreign place, but as observers documenting an alien invasion.

I looked at my iPhone and glanced at the date. September 11. I knew this, of course, but now that it was the early afternoon I could tell by my Facebook newsfeed that my friends in the United States were just waking up on the anniversary of terror. I wondered how Spanish tourists who traveled to New York on this day felt. Did they express respect for our day or memorial? Did they wave their own flag? Or did they purchase a T-shirt reading “Remember 9/11” at a corner of the memorial and tweet about the cultural spectacle around them?

Back in Catalonia, who’s day was it, then? Was it mine as an American citizen who happens to be traveling Europe, or did it belong to the people of the land where I stood? Both days, while different in tone, have similar cultural gravity to the people they belong to.

If identity is the key, then where is my lock? Am I apart of a culture of the country where I’ve never actually lived, of an island where I’ll always be the gringa, or of this new region who is trying to establish an identity of their own?

I had been so confident when I first arrived here, strutting into the country because I knew how to speak Castellano, and I conveniently ignored the fact that Catalán was the dominant language. Was I any better than the girls wearing the flag as a costume?

I turned off my phone, and I remembered that I was told not to take it out of my apartment due to the threat of pick-pocketers, but I ignored that advice, I realized, so that I myself could document this holiday, and maybe squeeze a profile picture out of it.