John Oliver is speaking, and you should listen 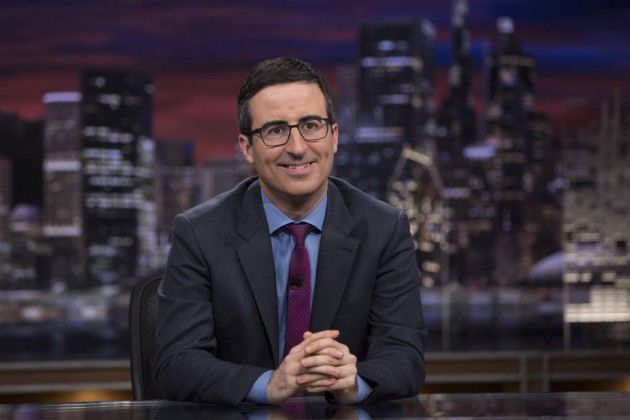 Political satire affects how the public perceives the very real issues being mocked. Whether or not comedians choose to recognize the impressions they make on their audiences, humor does reach people, make them think and help them understand, perhaps more so than objective facts do. Comedians, though, often like to focus on what they believe to be their one job—to keep the laughs coming.

John Oliver has harmonized comedy and reality with his hit HBO show, “Last Week Tonight,” which debuted in April of 2014. Even if he won’t admit it, the politically and socially relevant topics Oliver covers shed light on injustices and harsh realities, while episodes simultaneously serve as calls to action to viewers.

Here’s how each 30-minute show is structured. First, Oliver riffs on a few of the week’s biggest news stories, pointing out absurdities and roasting the story’s characters with the awkward charisma that has endeared him to a waxing audience.

Then, the show deviates from other late night talk shows like “The Daily Show,” where Oliver blossomed as one of Jon Stewart’s valued correspondents.

Instead of welcoming guests, Oliver dives fully into an issue, devoting the remaining 15 to 20 minutes of his show to telling a complete story focusing on the week’s chosen topic. He has assessed capital punishment, global warming, immigration reform, income inequality, LGBT rights in both Uganda and America, FIFA’s corruption, mandatory criminal sentencing and crooked televangelists. While these matters have been discussed in the media and elsewhere, Oliver manages to present a wholly unique argument.

Most, if not all, of the show’s main topics are painstakingly serious problems—things that seem characteristically devoid of humor. However, Oliver manages to weave a witty and clever narrative that is still intelligent and clear, even if his liberal leaning is sometimes on display.

Much of his success in generating laughs comes from his ability to highlight clearly unfair or absurd points in these issues with his genuine display of incredulousness. Oliver is fighting back against the inequities that most have accepted simply as unfortunate realities of life. John Oliver is on your side, and it’s inspiring to watch.

The creativity with which he attacks these matters is a breath of fresh air. There was a fake trailer for a fake detective show to illustrate how civil asset forfeiture puts inanimate objects—not people—on trial; a mob of 98 scientists to show the actual ratio of those in the science community that back the reality of global warming; a diseased lung mascot—Jeff the Diseased Lung in a Cowboy Hat—to convey how tobacco companies could truthfully market their products.

During his discussion of global warming, Oliver responded to a Gallup poll that said one in four Americans is skeptical of climate change. His reaction would soon go viral.

“Who gives a s***,” Oliver exclaimed. “That doesn’t matter. You don’t need people’s opinions on a fact. You might as well have a poll asking, ‘which number is bigger, 15 or five?’ or ‘do owls exist?’ or ‘are there hats?’ The debate on climate change should not be whether or not it exists, but what we should do about it.”

Oliver hilariously put into words a feeling likely held by many.

While he aggressively takes on important subjects and continues to win battles, it’s surprising to hear how Oliver describes his own work. He sat down with the hosts of “CBS This Morning” this past April to discuss the success of his then one-year-old show.

The interview started with a two-minute montage from “Last Week Tonight,” after which Oliver was unimpressed with himself.

The intent of the show, as Oliver sees it, might surprise people who tune in each Sunday because of the gravity of the content. “Just to make people laugh, that’s it, at the end of the week,” Oliver said.

If laughter truly is the only goal, then Oliver is certainly succeeding, but it’s naïve for him to ignore the greater effects “Last Week Tonight” has had, or maybe he just doesn’t want to. If you have kept up with the show since its debut, then you will understand how it sparks serious thought.

Why Oliver is so quick to deflect praise and ignore his influence is unclear, but he is obviously uncomfortable with his rising fame, and perhaps the responsibility that accompanies being an advocate for real issues with weighty consequences.

Stewart, Oliver’s mentor, expressed a similar sentiment when he went on Crossfire, a CNN show that ran until 2005, pitting one conservative and one liberal pundit against each other. Stewart lambasted hosts Tucker Carlson and Paul Begala for their “partisan hackery,” which he believed was hurting the public discourse on political issues.

Carlson, a conservative, then attacked Stewart’s soft questioning of democratic presidential candidate John Kerry, who had recently appeared The Daily Show. “You’re on CNN. The show that leads into me is puppets making crank phone calls,” Stewart said. “What is wrong with you?”

His point was that, like Oliver, Stewart saw himself strictly as a comedian and not as a journalist. Oliver even seems to discredit himself in that department, though.

“I am the unfortunate face of a lot of people’s work,” Oliver said. And while he is surely bolstered by a hard-working, capable staff, Oliver is the keystone of the arch. Maybe his reluctance to accept credit comes from a desire to make the issues at hand the stars of the show—to keep the spotlight squarely where Oliver believes it belongs.

Since “Last Week Tonight” has succeeded in effecting change in people’s perspectives and sparking action based on his reporting, Oliver himself cannot hide from the adulation. It doesn’t really matter, though. Oliver has found a model for “Last Week Tonight” that has connected with his audience—investigative reporting mixed with nonstop humor. Looking past the comedy, in spite of its worth, the content is king. The issues are real and the reporting is true and worth considering, whatever your position.

Simply put, John Oliver is speaking, and you should listen.