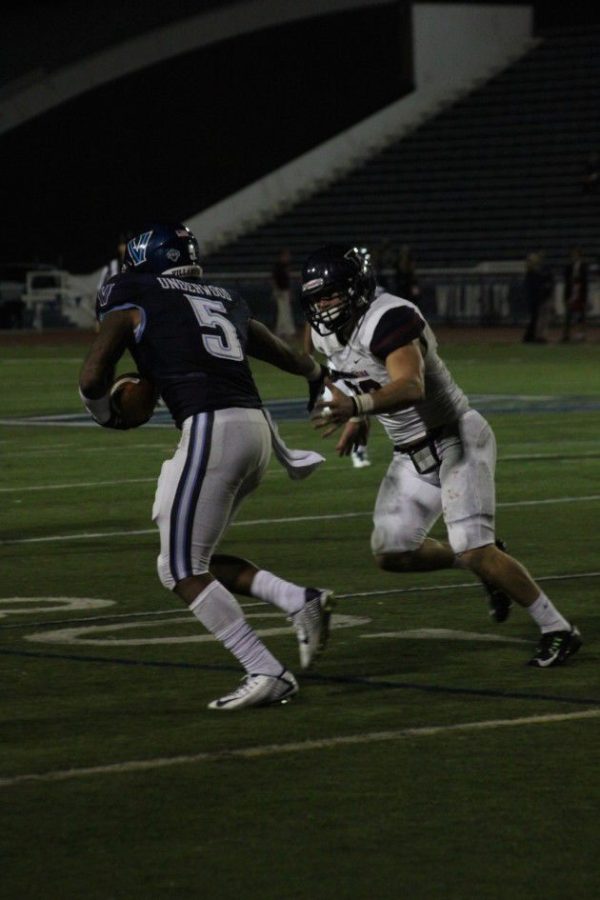 The last time Villanova’s football team suffered defeat at the hand of Penn, William Taft was running the United States from the White House and legendary Franklin Field in Philadelphia was only 13 years old.

On Thursday night, 104 years later, Villanova Stadium witnessed a very unfamiliar sight – the Wildcats fell to the Quakers by a final score of 24-13.

“Penn played very well,” Villanova Head Coach Andy Talley said following the game.  “I think they came in with a purpose, they had a very good game plan, [and] scored right off the bat on us.”

“We did enough negative things in the game to get beat,” he said. “Penn came in and played, for them I think, almost a perfect game and we made a lot of mistakes.”

Penn’s almost perfect game plan began in the first half when the Quakers controlled the football and started wearing down Villanova’s defense.

“We had to minimize their possessions,” Head Coach Ray Priore said. “The game is all about the ball – whoever has the ball wins.”

Redshirt freshman quarterback Zach Bednarczyk spent the majority of the first half of his first career start watching the game from the sideline. He and the Villanova offense were only on the field for five and a half minutes as they found themselves trailing Penn 14-0 at halftime.

The Quakers, on the other hand, used the other twenty-four and a half minutes to control the ball and move inside the Wildcats’ side of the field at will.

“That was definitely a difficult task,” Bednarczyk said when asked about finding a rhythm after being confined to the sideline in the first half.  “Yeah, it’s tough sitting there for a long time, but when we were on the field we still just didn’t get it done.”

Villanova sputtered to just 29 total yards in the first half while Penn’s methodical approach to offense was the key to their early domination.

The pair finished the Quaker’s opening drive by linking up on a 12-yard touchdown in the corner of the end zone.  Then, halfway through the second quarter, Torgersen fired a strike to Watson who turned an 8-yard curl into a 33-yard touchdown that featured a vicious stiff arm on a Villanova defensive back.

Penn was about to extend its lead to three touchdowns when Villanova’s Malik Reaves ripped the ball away from Watson in the corner of the end zone for an interception.  The sophomore cornerback returned the ball 66 yards and sent a jolt of life into his teammates on the sideline.

That breath of life was short-lived for the Wildcats, whose first two offensive possessions of the second half ended in a three-and-out and a Bednarczyk interception, respectively.

After Penn tacked on a field goal, the offense finally woke up and put together a textbook 74-yard drive that ended in a one-yard touchdown run by senior running back Gary Underwood.  The score cut Penn’s lead to 17-7.

The Wildcats got the ball back on their own eight yard line with 11 minutes left in the game and put together another promising drive. On the eleventh play of their march down the field, junior running back Javon White fumbled inside Penn’s ten yard line and the Quakers’ linebacker Donald Panciello scooped up the loose ball and returned it 90 yards for a touchdown.

Panciello’s touchdown was what Talley described as the “turning point” of the game and pretty much destroyed any hopes the Wildcats have of completing the comeback.

Bednarczyk led Villanova on a scoring drive that ended with an eight-yard touchdown pass to freshman Jarrett McClenton, but the Wildcats failed to recover the onside kick.  Penn then took the field and called a play that had not been used in a fourth quarter against Villanova in over a century – the quarterback kneel.

“We talked about belief and trust in each other [and] our system,” Priore said of his team.  “These guys inspired everybody this week.”

For Priore, the historic victory was his first as the head coach of the Quakers.

Torgersen was efficient for the Quakers, completing 14 of 22 passes for 171 yards, two touchdowns, and one interception.  With his top receiver, Watson, sidelined for the entire second half with an injury, Torgersen took care of the football and successfully preserved Penn’s lead.

Bednarczyk finished with one touchdown and one interception while going 18-of-31 for 185 yards.

Talley and the Wildcats will have 16 days to prepare for their next opponent – William and Mary. Villanova won’t see the return of injured quarterback John Robertson after the bye week, but the long layoff will give its damaged offensive line and other tired players a much-needed chance to recover.

That conference matchup will take place on October 10 at Villanova Stadium with kickoff scheduled for 12 p.m.