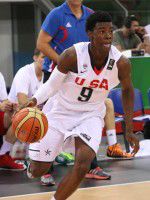 While all of Nova Nation is anxiously awaiting the start of the 2015-2016 basketball season, it is important to remember the foundation of every college basketball program in the country: recruiting.  Coach Jay Wright has stayed busy all summer, evaluating and offering players of the next wave of high school talent around the country. Wright is enjoying recent recruiting success, including newcomers Jalen Brunson, Donte DiVincenzo, Tim Delaney, and now continues to establish connections and try to sell players on joining the Nation. For 2016, he has already gained the commitment of Top 20 power forward Omari Spellman, who will make an immediate impact on the post. With positive momentum mounting, here are some of the players Wright will try to lock down next:

Painter is a 6’10” power forward out of Hershey, PA. After mutual interest was reported throughout the summer, Villanova finally offered in early August, which led to an official visit in late August. The visit reportedly went well, as Painter was able to establish a relationship with the coaching staff and the players that were on campus. He reportedly will finish taking his visits before deciding, but many people think Nova is the favorite at the moment. Penn State and Big-East rival Xavier are supposed to be in the running as well.

Delaurier is a 6’9” power forward out of Charlottesville, VA, that was offered by Nova in early August. He has been a fast riser among recruiting rankings after a very strong summer in which he showed his improving skills. To convince Delaurier to come to the Main Line, Wright will have to out-compete Mike Brey from Notre Dame and Coach K form Duke, who seem to be the favorites right now.

Hunter is a 6’7” wing out of Friends Central High School in Philadelphia. His stock rose exponentially after a strong summer. He recently cut his list to 11 and included Villanova, but after visiting unofficially in early August, did not schedule an official visit.

Wright and his staff have recruited Stevens for some time now.  He uses his physicality and athleticism to drive to the basket with a bully mentality. He attends Haverford School in Philadelphia, so his proximity to Nova has already allowed him to visit before last school year ended.

Duval is a 6’2” PG out of Wilmington, DE. He is a consensus top 5 player and widely regarded as the best point guard prospect in the country. He is simply a playmaker in every sense of the word with a knack for scoring in a multitude of ways, and has exhibited these traits against some of the top talent in the country.  Now, he is transferring to Advance International Prep in Dallas, Texas, which could possibly have an impact on his recruiting. If Wright can stay hot on his recruiting trail, Duval would come to campus with the same expectations as players such as Scottie Reynolds or current wildcat Jalen Brunson.

Walker, a 6’5”, top 20 wing out of Reading, PA, is reportedly Nova’s top target in the 2017 class, according to 247 sports. He is described as a slasher with a good jump shot when his feet are set. He has exhibited a lot of athleticism with excellent upside as long as he continues to put on weight. A commitment from a player like Walker would be Wright’s third 5-star player in as many years, following Brunson and Omari Spellman.

Harvey, hailing from Bowie, MD, stands at 6’6” and is described as a pure competitor with tremendous upside who uses physicality to beat down his competition. To land Harvey on the Main Line, Coach Wright would have to beat out Duke, who appears to have to upper hand at this point in the process.

At 6’10”, Bamba is one of the prized big men of the 2017 class and would be a huge addition to Nova’s frontcourt. Some scouts have compared his tools to a young Kevin Garnett. Nova would have to beat out Duke and Kentucky, among others, for his services. There is one advantage though; Bamba attends Westtown School in Pennsylvania, the same school attended by current Wildcat center Daniel Ochefu