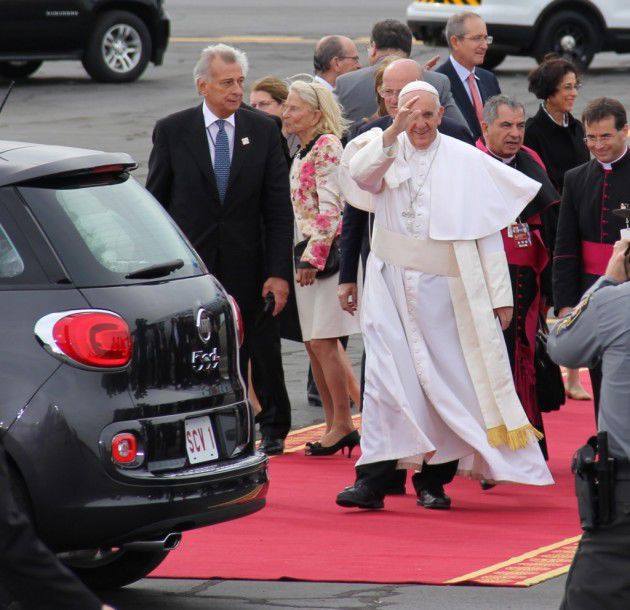 (Philadelphia, Pennsylvania) Pope Francis arrived at Atlantic Aviation in Philadelphia this morning, which marks the beginning of the last leg of his apostolic journey to the United States. Among those present at his arrival were several dignitaries, including Archbishop Vincenzo Paglia, head of the Pontifical Council of the Family, as well as City of Philadelphia Mayor Michael A. Nutter.

The Bishop Shanahan High School band performed at the welcome ceremony for the Pope, performing the theme song to “Rocky” as Pope Francis descended the steps of the American Airlines 777 Boeing jet.  Among the first individuals to greet the Pope were the members of the Bowes Family, who were selected by the Archdiocese of Philadelphia to attend the ceremony. During a press conference during the World Meeting of Families on Thursday, Bernadette Bowes expressed how humbled she was to be selected for the massive honor: “I do not feel worthy… I am so appreciative of this gift that has been bestowed upon us,” she said. The family was chosen because of their dedication to the Catholic Church and their faith. Additionally, the experience is particularly meaningful for Rick Bowes, a Philadelphia police officer who was the victim of a violent tragedy in which his partner was killed and he was critically injured in the line of duty.

Another family also got the extraordinary opportunity to meet the Pope—though unplanned. As the Pope greeted the dignitaries on the tarmac and entered into the now famous black Fiat which he has chosen as his method of transport during this apostolic visit to the United States, he paused in front of the band, and got out of the car to bless the Keating family.  Michael Keating, Director of the Bishop Shanahan High School band, has a 10-year-old son, also named Michael, who suffers from cerebral palsy. Pope Francis bent over the metal barrier to reach down and bless the ten year old, forever impacting him and his family. Kristen Keating, Michael’s mom, was visibly very emotional during the encounter, and afterward expressed her immense gratitude.

From Atlantic Aviation, Pope Francis was escorted downtown to the Cathedral of Saints Peter and Paul, and celebrated mass for about 1,600 pilgrims. Throughout this United States visit, Pope Francis has highlighted a number of issues in his speeches and homilies, including climate change and immigration. In today’s address, he focused on the role of women in the Catholic Church, and stressed the importance of “valuing the immense contribution which women, lay and religious, have made and continue to make, to the life of our communities.” Additionally, he touched on the importance of the presence of “personal responsibility in the Church’s mission” in all members of the laity.

Also on the Pope’s itinerary for Saturday are an address on immigration and religious freedom at Independence Hall, and a celebration of the Festival of Families on the Benjamin Franklin Parkway. Academy award nominated actor Mark Wahlberg will serve as the host, and the festival will include performances from 18- time Grammy award winning Aretha Franklin; The Fray; and Marie Miller, singer, songwriter, instrumentalist and finalist in the 2014 Macy’s iHeartRadio Rising Star Competition. Hundreds of thousands of people are expected to be in attendance for the Festival, which begins at 7 P.M. this evening.