Football Storms Back Against Richmond, Moves To 3-0 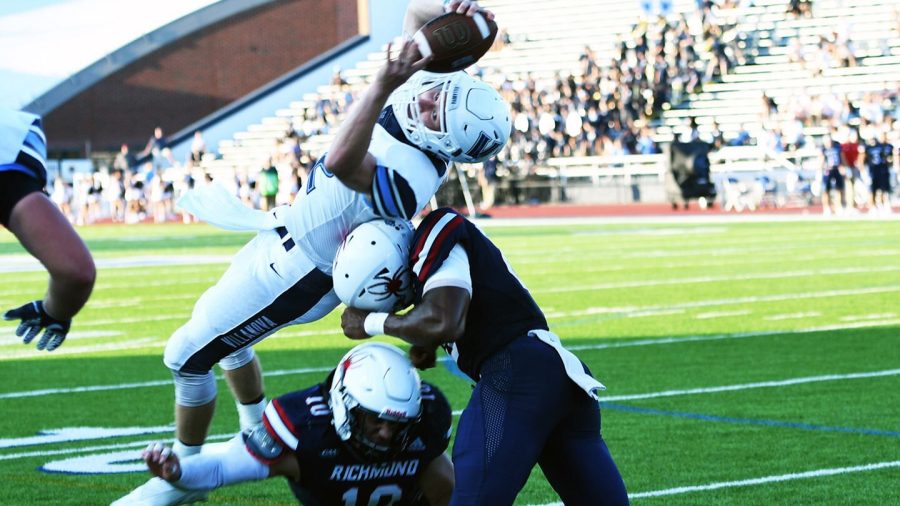 Football Storms Back Against Richmond, Moves To 3-0

The sell-out crowd of 12,001 had emptied considerably by the time the clock hit 8:56 remaining in the 4th quarter, when Richmond took a 27-13 lead. Villanova did not care. In an absolutely crazy, emotional roller-coaster of a battle, Villanova advanced to 3-0 on the season in defeating Richmond, 34-27. There was so much more to this football game than just that final score and the win, though.

As students and families entered Villanova Stadium from their tailgates, the mood was festive. That festive mood continued as Villanova jumped out to a 13-0 lead with 5:50 remaining in the first half, following a 30-yard made field goal by Cole Bunce, who was two for three on the day with the make from 30, another make from 36, and a miss from 27. Villanova’s defense held strong throughout the first half, not giving up a single point to the Richmond offense, who were led by QB Joe Mancuso. The Cats went into halftime with a commanding 13-0 lead; however, that lead could have been even more commanding. Perhaps in an omen of the turn of events that was to come in the 3rd quarter, Villanova appeared as though they were poised to take a 20-0 lead heading into the half following a 39 yard TD pass from QB Daniel Smith to WR Dez Boykin with less than a minute until the half, but the play was called back due to a holding penalty.

As a large portion of the fans remained entering the third quarter, both the Cats and their supporters had to feel good about where they were positioned to win the football game. Those feel-good vibes came to a crashing halt in the third quarter, and it all began with a bang. Bunce had been kicking balls on kickoffs through the back of the end zone all day, but on the opening kickoff to start the second half, he did not, and Richmond WR Aaron Dykes returned the kick for 98 yards to the house. 14 seconds into the second half, Richmond had cut the lead to make it a single-possession game. Both the Spiders’ offense and defense seemed to be sparked by that return. They forced a fumble, and then proceeded to score another touchdown. Less than 3 minutes into the second half, Richmond had taken a 14-13 lead. By the end of the 3rd quarter, the crowd had been silenced, as the Spiders put up 24 unanswered points to take a 24-13 lead into the 4th quarter. Being down 27-13 on Villanova with 8:56 remaining, the task at hand seemed somewhat insurmountable for the Cats considering what had happened to that point in the second half. They had other plans.

The Villanova offense took the ball and Smith immediately completed back-to-back pass plays for a total of 40 yards to TE Todd Summers. Smith continued completing passes on the drive, and ended it flying into the end zone, giving the entire team a very-much needed jolt of energy and pulling them to within one touchdown of Richmond with 5:01 remaining. The defense picked up a three-and-out, and following an unsportsmanlike conduct penalty on Chance Graves of Richmond on the punt, Villanova’s offense took the ball with 49 yards to go and 2:30 remaining, looking to tie the game. After beginning the drive with a 7 yard pass play to RB Justin Covington, Smith looked towards Junior WR Jaaron Hayek, and the sideline exploded with energy as the 44 yard pass play was completed to tie the game. The defense took that energy, and forced another three-and-out; all of a sudden, the Cats were going to have a shot at winning the game in regulation.

After an incompletion intended for Hayek, Smith completed a 3-yard pass to Covington, followed by an 18-yard pass to Hayek on 3rd and 7, extending the drive. With the ball at the ‘Nova 47 yard line and less than a minute remaining, the offense still had some work to do. Smith snapped the ball, and saw Junior WR Rayjoun Pringle open in the flat on a slant. Pringle caught the ball in stride, and began his sprint to the end zone. Picking up blocks along the way, in a fairy-tale ending, Pringle made his way to the promised land to give Villanova the 34-27 lead, which the defense held in the final 40 seconds to give the ‘Cats a miraculous, well-deserved win.

The leading players on the day were Smith, who was 26-40 with 350 passing yards, 2 TD’s, and an interception, along with 4 carries for 19 yards and 2 rushing TD’s, Covington, who had 18 carries for 98 yards and 3 receptions for 10 yards, and Hayek, who had 8 receptions, 127 yards, and the game-tying TD. Following the win over the 21st-ranked Spiders, Villanova looks to move into the top 10 of the FCS rankings entering their Week 4 matchup against the 6th-ranked team in the FBS in Penn State. It will be a challenge, but Villanova has to feel good about entering the game at 3-0.