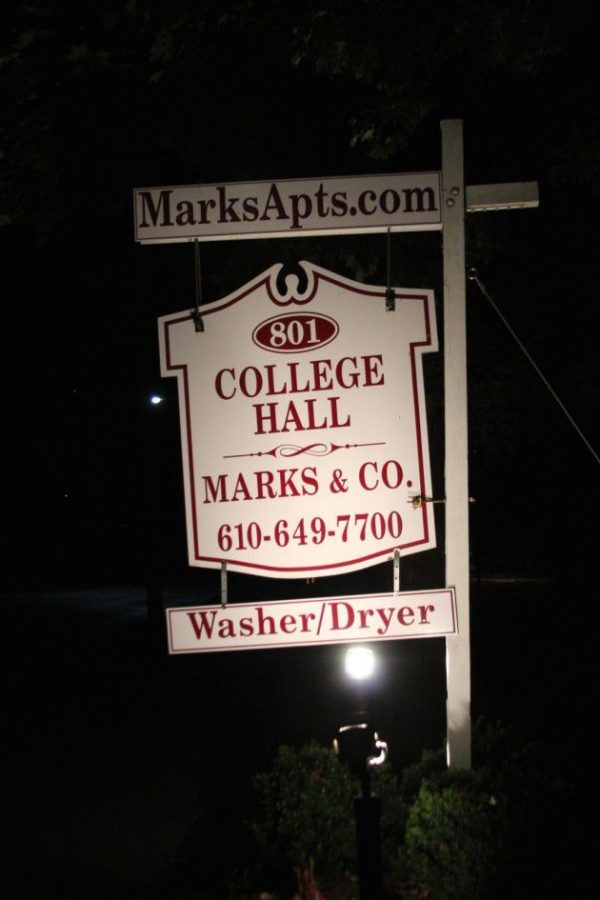 Traumatizing and unexpected are two words College Hall resident, Mariah Salerno, uses to describe her experience with a suspicious male late on the night of Saturday, Oct. 17.  Security tapes later revealed that several apartments of College Hall, commonly known as “the Courts” were subject to intrusion by the unidentified male.

Salerno, a member of the women’s lacrosse team, returned from her play day in Long Island, New York at roughly 11:45 p.m. on the 17th to be greeted by an mysterious middle-aged male lurking around her apartment tower.

Dressed in a red hoodie and beanie, the large, Caucasian male initially struck Salerno’s suspicion, seeing as most students/residents were still home for October break.

Salerno entered her apartment to notice an electronic sign on the family room bookshelf had been switched on, which she was sure her and roommates turned off for the week-long semester recess. “When I saw the sign light on, I figured someone had been in the apartment so I went to leave,” Salerno states.

“As I was opening my door to exit, the male was standing right outside of it returning the fire extinguisher,” she proceeds. After Salerno let out a loud scream and rushed back into her apartment, the male evacuated the “A/B” tower and entered the tower directly across, “G/H.”

Quickly gathering her belongings and planning to drive to her friends’ apartment to sleep in safety, she peaked out of her family room windows overlooking the courtyard. She noticed the red-hooded body squatting behind a bush next to her parked car.

“This is when I decided to call the police,” Salerno recounts. “Realizing he had a key to my apartment, I knew I wasn’t safe,” she adds.

Four identified Radnor Township police cars and one undercover immediately responded to the scene. One officer remained in the courtyard to search for the male while one officer came to Salerno’s apartment door.

Unable to locate the male, the police took Salerno’s statement and stayed until 3:30 a.m. reviewing security footage from the stairwell cameras.

Salerno, concerned for her safety, left to sleep at a friends’ and ensured her roommates would not be returning.

Radnor Township police officers returned to the Courts the following day to ensure the superintendent was aware of the incident and the apartments that were entered had their locks changed.

They informed residents that they have copies of the tapes, and are working to identify the intruder.

Although it was reported that the intruder did not steal any items, the intruder’s presence inflicted fear into many students, especially College Hall residents, who otherwise perceive Bryn Mawr as perfectly safe place.

H tower resident and Villanova junior Jon Chester spoke to the surprise of the intrusion. “We feel like we’re in such a safe area being at the heart of a nice suburb,” he said. “We definitely did not expect this to happen.”

It is not uncommon for College Hall residents to leave their doors unlocked at all hours of the day. F tower residents and Villanova seniors Brendan Dunphy and Levi Dwyer said, “Half the time we don’t even lock our door, but this definitely made us rethink our comfort with doing that.”

Although a week of unscathed living as occurred in the Bryn Mawr apartment complex, the intruder left a permanent impression on many Villanova students.