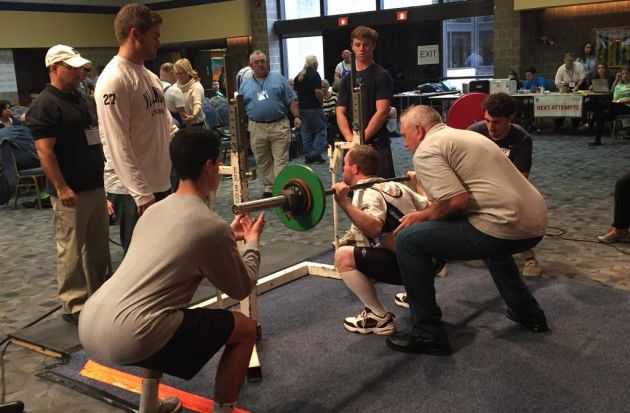 Of the 4,000 volunteers, nearly 500 of them are Villanova student-athletes.

“From a student-athletes perspective it just rubs off on the Villanova community because our [Fall Festival] athletes know that student-athletes get involved in it too,” student festival director Bobby Reiff said.  “Having the whole entire community involved in fall fest makes it what it really is for our athletes.”

The Fall Festival begins with Opening Ceremonies on the Friday of competition weekend. Each participating county chooses a few of their athletes as representatives to hold the county banner during the opening procession.

As each athlete is chosen, his or her brought behind Villanova’s student section in to line up with their respective county. It is here, behind the scenes, where the first connections are made.

For at least the last eight years Villanova’s student-athlete community has been a part of opening ceremonies. The Villanova varsity teams who attend are split up among the counties to walk with the Fall Festival athletes through the Pavilion during the introductions.

There is, however, a 20 minute window in which Villanova student-athletes have the opportunity to mingle with the Fall Festival athletes who are representing their respective county.

“Opening ceremonies was a really cool experience,” senior baseball player Eric Lowe said. “I was able to meet a bunch of the athletes, and it was cool reconnecting with them later in the weekend going to see some of their games and events.”

Meeting the Fall Festival athletes at opening ceremonies is only a small part of what the Villanova Student-Athlete community is able to do over the weekend.

Much like majority of other volunteers, Villanova’s varsity teams attend the specific events, whether it is a competition or an award ceremony. The Student-Athletes are there to express their appreciation for the dedication of the Fall Festival athletes in their respective sports.

I’m not to say that Villanova student athletes are the best volunteers for the Fall Festival, but there is an instant connection between the two groups because, at the most basic level, we are the same.

“Being a part of the Special Olympics Committee and being a student-athlete as well has brought a lot of opportunities to understand both sides to the story,” Manny Morris, senior baseball player and assistant volleyball chair said. “Personally, as a student athlete there is a lot of responsibility of giving your time and talents back to the community, so something like Special Olympics is extremely important, because we correlate very similarly in the fact that we are both athletes and both competing. So the way the athletes who come in for Fall Fest over the weekend interact with the student-athlete community is pretty powerful to see. It gives you the insight of how important it is for us to give back when we can.”

“They came over on those Thursday nights and joined us for practice and got to meet athletes like David here,” says Otterbein. “They formed some quick friendships over the spring months then again in August when we start practicing for cross country.”

“It feels great and makes me work extra hard,” Fall Festival athlete David Miller, a long distance runner from Montgomery County, said, when asked about the student-athletes attending his practice.

It is also not uncommon for a Fall Festival athlete to be seen searching for a student-athlete table in O-Town, or better known as the Quad. Festival Director Bobby Reiff recalls from a few years back when the football team was signing autographs on posters and handing them to the Fall Festival athletes, who thought it was just the coolest thing be hanging around these football players on campus and then later seeing them at the Fall Festival events cheering on the athletes.

Student-athletes understand the time commitment to perfecting a sport; it takes a toll on a person. We understand winning and losing, failure and success, but it is when we have the support from others that drives us to better.

So when Fall Festival is happening on Villanova’s campus, our student-athletes drop what they are doing to become fans for a change, because at the most fundamental level, we are all athletes.