Reaction to Paris attacks highlights apathy toward other tragedies 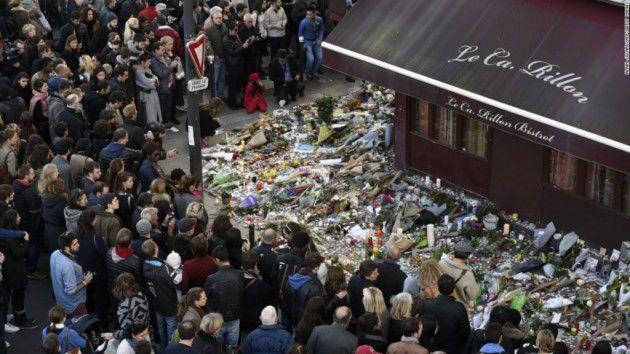 On Friday, Nov. 13, the city of Paris descended into chaos as assailants terrorized one of the world’s most vibrant cities. A typical start to the weekend for Parisians became a nightmare that the darkest depths of people’s minds could not have fathomed. The tragedy in Paris continues to weigh on people’s minds in nations across the world, but the severe and unending reaction dwarfs the amount of attention paid to other, more constant terrorist acts with staggering body counts that take place in less developed nations.

The Islamic State, also known as ISIS, has claimed responsibility for the coordinated attacks in Paris that killed at least 129 people. Since the atrocities took place, the world has stood at attention, bowed in mourning and knelt in prayer. The Empire State Building and the World Trade Center in New York City shone with the hues of the French Flag. News stations forgot all lesser stories. Social media exploded. Memorials were held across the globe—each with scores of people sharing in France’s misery, but attempting to buoy the nation’s people with hope.

The astounding support from average citizens and from the governments of world powers is beautiful and reassuring—it sends the message that violent extremists will not intimidate the free, civilized world. There is nothing negative to be said about the aftermath of the Paris attacks, except about the perpetrators.

However, where was the outrage and international cohesion when an ISIS faction claimed responsibility for bombing a Russian charter jet that exploded in air, killing all 224 people on board? And why is even less attention and news coverage dedicated to similar acts of terrorism that happen throughout the Middle East and Northern Africa?

The explosion of the Russian plane took place on the last day of October—not even a month ago. But who can say that they know that two explosions at a peace rally killed more than 100 people in Turkey on Oct. 10? Or that at least 25 died in bombings outside a mosque in Yemen not even three weeks earlier?

Again, every tweet, thought, prayer and memorial in remembrance of the victims in Paris is meaningful and inspiring. In fact, it is no wonder why the savage murders by ISIS militants in Paris struck people at the most raw threads of their humanity, especially in the United States.

France is one of America’s oldest allies, and Paris is a symbol of elegance, peace and livelihood. The victims were not machine gun-wielding soldiers dressed in camouflage, riding in tanks and Humvees through a desert. Instead, innocent citizens dining and experiencing a rock concert were coldly executed. This was not their fight.

Perhaps selfishly, each person that the news reached likely placed themselves in those public places and imagined hearing that first gunshot ring out. As Americans—and if not, as college students—many of us have likely visited Paris. Only a select few have probably set foot in the Middle East.

Our perceptions of countries like Iraq, Iran, Syria, Libya, Lebanon and Yemen, in most cases, have been framed entirely by the continued violence that plagues them. We are numb to the news of violence and tragedy that is far too common in many struggling nations. However terrible it might be, those incidents are often relegated to the status of minor events that stain our Twitter feeds—ones that we are quick to pretend do not exist.

The Paris attacks are particularly troublesome because they represent a new threat to the developed world and can be likened to the events of Sept. 11, 2001. Middle Eastern terrorists massacring rock music fans and restaurant patrons was not previously a harsh reality of this misguided world, in the way that we had categorized ongoing violence in other places.

The peace of mind that came with removing ourselves, both physically and emotionally, from those awful situations was infringed upon by this latest episode.

Soon after the attacks, President of France Francois Hollande declared that his country is now at war with ISIS. Perhaps this will serve as a wake-up call to the rest of the world that ISIS must be stopped in its tracks and that we cannot dismiss other, less publicized acts of violence.