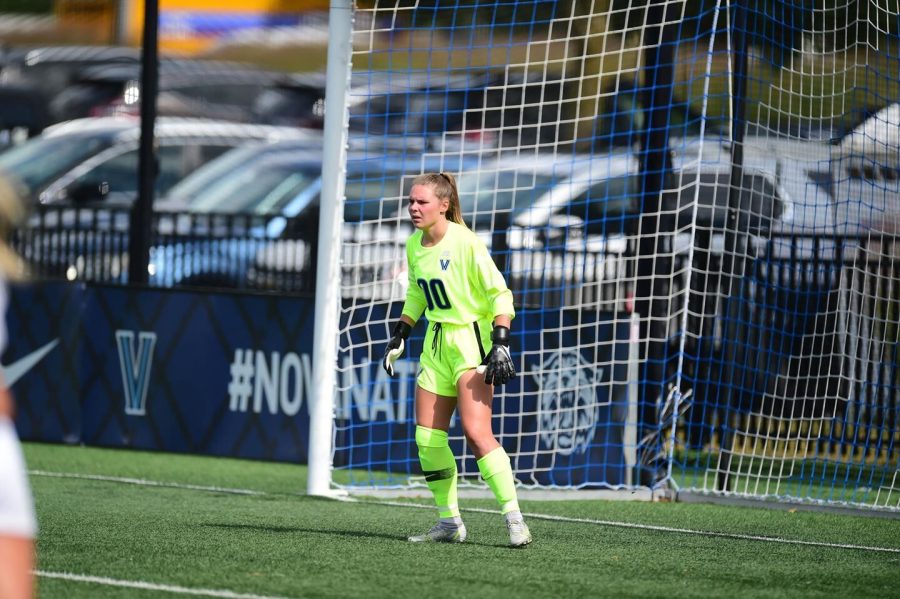 Villanova’s women’s soccer team took home its fifth straight win to start the season Sunday, shutting out the Cornell Big Red, 2-0, at home. It’s the first time the ‘Cats have started the season 5-0 since 2008. The two teams were on very different runs coming into the matchup, with the Big Red having dropped their last fixture, 5-2 against Niagara University to fall to 1-1-1 on the year.

The Wildcats started the game by dominating possession, creating plentiful chances. A free-kick was given to the ‘Cats in the fifth minute after a foul about 10 feet outside the 18-yard box. Sophomore midfielder Emma Weaver played a rolling ball into the danger area that senior Chloe O’Neill was able to get a foot on, directing the ball around the keeper and into the back of the net for her sixth goal of the season. It was a fitting way for O’Neill to start the game, after she was named as the Big East Player of the Week last week. The goal places O’Neill as one of the top six goal scorers in the nation and second in the conference.

After the opening score, Villanova continued to control the ball, but Cornell had its first chance in the 13th minute as the Big Red found itself with a corner. Senior keeper Megan McClay was able to smother the chance, snagging the ball out of the air before any Cornell players had a chance to get a foot on it. McClay was coming off an excellent week, with two wins, one shutout and a .900 save percentage, earning her a spot on the Big East’s Weekly Honor Roll.

The game continued to be a back-and-forth possession battle until Cornell broke away on the counter near the 30th minute, but freshman Maddie Fried was able to get a foot in just as a Big Red forward pulled back to take a shot. Shortly after, freshman Susanna Soderman was able to get a shot on goal after a give-and-go, but Cornell keeper Erica Fox was able to make a gutsy save against the shot that was on frame.

A handball was called in the 31st minute in the 18-yard box, which resulted in a penalty kick for Villanova. Senior midfielder Brice McInroy calmly put it away to her right, sending the keeper the wrong way. The clinical finish put the Wildcats up 2-0 and marked the team’s 14th goal of the season.

The Wildcats put on a commanding performance in the first half. Total shots at half-time were 10-1 in favor of the ‘Cats, and they had six more shots on goal than the Big Red through 45 minutes of play.

The ‘Cats started the second half with two quick dangerous chances, but neither could find the back of the net. Cornell was able to respond quickly with two quick chances of its own, but McClay was able to stop both a corner and a free-kick before either had the chance to ruin the ‘Cats clean sheet. Cornell came storming forward in the 60th minute, but a huge tackle from junior defender Molly Shannon just outside the 18-yard box was able to wipe out the Big Red attack. The run of play started to shift toward Cornell’s favor, as the Big Red continued to create chances. McClay was forced into action for just the third time in the 71st minute, making a save on a Big Red shot from the top of the penalty arc. She continued to control the game from the keeper spot, extinguishing any chances the Big Red had.

The ‘Cats finally got back on the front foot with 15 minutes left in the game, as they created a dangerous chance for Soderman, whose shot off of a service from a corner was ultimately blocked by a Cornell defender in the box. The Wildcats generated a couple more chances, but Fox was confident in between the sticks, tallying her sixth and seventh saves of the afternoon. Cornell was able to fend off another ‘Cats barrage in the 80th minute, as the defense held strong against multiple chances, including a dangerous corner from O’Neill. McClay made her fourth save of the afternoon in the 83rd minute, but from then on it was all Wildcats, as they held possession and closed out the 2-0 win.

The Wildcats are scheduled to take on their biggest challenge yet as they travel to Virginia Tech for a non-conference matchup on Thursday, Sept. 9 at 5 p.m.