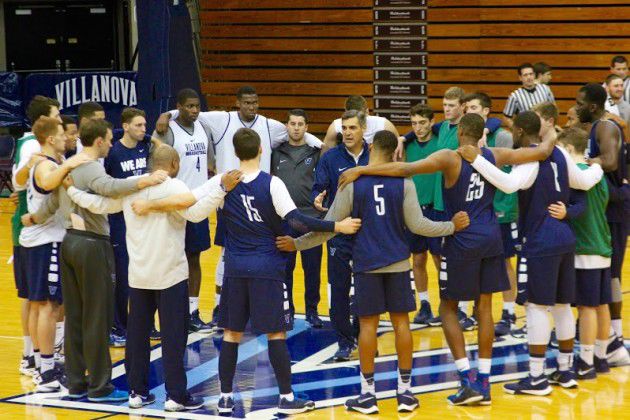 Motivational chatter can be heard from every member of the Villanova men’s basketball team as they gather on the baseline to warm up before games and practices. This example of unity and togetherness is part of the foundation of what makes Villanova such an attractive destination for high school players that value a team-oriented environment.

The landscape of college basketball is in a dark time amidst major college basketball programs like Syracuse and SMU receiving sanctions for various NCAA rule violations, and Louisville going under investigation last month for its own misconduct.

Recruiting is an area where many teams find themselves running into trouble. Whether it is through misinterpretation of NCAA regulations or a blatant disregard for the rules, questionable recruiting tactics have become all too common in the world of major college sports.

This begs an interesting question: How does a program successfully recruit top talent while maintaining the integrity of the NCAA rulebook?

At Villanova, it starts with realizing the strengths and weaknesses of the program.

“We’re not going to bring somebody in and blow them away with our 20,000-seat arena,” Head Coach Jay Wright said. “It’s more [about] relationships.”

And that has been the strength of Villanova recruiting – establishing meaningful relationships with recruits in high school to evaluate their on-court skill and off-court character.

“It takes a lot of work when you’re recruiting them,” Wright said of forming these bonds. “But it pays a lot of benefits when they come in as freshmen, because you already know them really well, and they know you.”

Junior Josh Hart recalled his own recruitment to Villanova and spoke highly of Wright’s attitude and commitment throughout the process.

“He was just a guy that you could tell had high character,” Hart said. “He never talked about any other school. He was just so confident in his program and his players, and that’s something I noticed right away.”

“Make sure the head coach is spending time with you.” McNesby said when asked about tips he gives young players at the beginning of the recruiting process. “Coach Wright does a great job, he really tries to get under the hood. I don’t think there’s enough guys [that do this].”

A major part of successful recruiting is creating a certain mold for the program and determining the types of players who can fit in and thrive. A clear definition of a program’s culture allows coaches and recruiters to easily identify “their guys.”

Being aware of a program’s mold is equally important for the players during the recruiting process.

Neumann University Head Coach Jim Rullo recalled stressing the importance of the coach-recruit relationship from the players’ point of view. The former Malvern Prep head coach often advised his players to use this as an opportunity to learn as much about their role in a program as possible.

A successful relationship between a high school recruit and a potential college requires both sides being on the same page and fully aware of each other’s expectations.

It is hard to have a conversation about recruiting with a Villanova coach or player without hearing the word “character” or “family.” These core values are communicated by Wright and his assistants during the recruiting process and are fully understood by each player before they ever step on the court in the Pavilion.

Freshman guard Jalen Brunson, the team’s highest rated recruit this past year, has not yet played a game in his Villanova career. However, his sense of belonging in the program started long before arriving on campus and was a major factor in his decision to come play for the Wildcats.

“The players really brought me in on my official visit, and I just felt so at home,” Brunson said. “I knew that I really wanted to come here because of how well they treated me. I knew that wasn’t just because I was there. I knew that’s what they do every day.”

A culture that is so vividly displayed by the players can greatly assist a program’s ability to recruit top players.

“They talk about family beforehand, [but it’s not until you get here] and you really experience it,” sophomore guard Phil Booth explained. “It’s based on everything we do with each other. On and off the court, it’s about family.”

Of course, this would not be possible without the aforementioned relationships that Wright forms with his recruits before they commit to Villanova. He carefully evaluates their attitudes to make sure they are the kind of people who will embrace this type of atmosphere and demonstrate it on a daily basis.

The key for Villanova and other schools who have established strong hands in the recruiting landscape is to structure their program in a way that attracts a certain type of player that will represent the team and the school to the highest standard.

A recruiting approach that is based on relationship building and maintaining a certain culture can have the same amount of success as one that uses top-of-the-line facilities and long lists of NBA draft picks as its foundation.

Wright has had seven players who received a five-star rating according to Rivals.com commit to play for him during his tenure. Since 2007, 18 players ranked in ESPN’s Top 100 recruits have committed to play at Villanova.

“There’s a lot of positives about Villanova that other schools don’t have,” Wright said proudly. “And when we find those kids that can recognize that, they’re the ones we really go after.”

And they are the ones that define Villanova’s recruiting approach and prove that a program based on integrity can contend in the national spotlight.