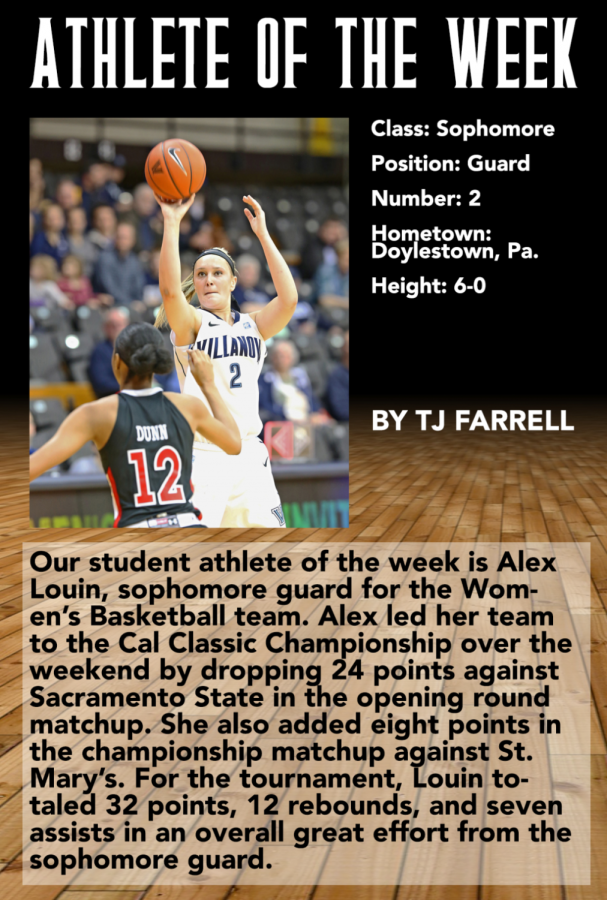 Last weekend, the Villanova Women’s basketball team did play in a Pavilion. Rather, it travelled to the Haas Pavilion in Berkley, Calif. as the Wildcats journied to the west coast to participate in the Cal Classic.

Villanova split its two games in the tournament by beating Sacramento State, 78–54, in the opening round of tournament but dropping a hard fought battle in the championship game to St. Mary’s, 67–60.  It now holds a 5- 3 record on the season.

In the tournament opener, the Wildcats jumped out to an enormous first half lead thanks to the Wildcats outscoring Sacramento State, 26–9, in the second quarter.

At the half, the Wildcats held a 47–24 advantage and coasted to a relatively easy first-round victory.

Sophomore guard Alex Louin led the Wildcats in scoring by recording a career high 24 points, going 9-of-17 shooting from the field, including 4-of-7 from beyond the arch.

This lop-sided victory had the Wildcats riding a wave of momentum coming into the championship game against the California native St. Mary’s Gaels. The Gaels upset No. 23 California in the opening round and continued their hot-streak against Villanova.

This championship matchup was truly an intense game of runs. The Gaels jumped out to an early lead behind the scoring of senior guard Lauren Nicholson, and led at the end of the first quarter by six points with a score of 18–12.

The Wildcats quickly responded with another impressive second quarter. To start the second quarter, Villanova jumped out on an 11–0 run. Alex Louin drained two long- range jumpers from downtown, while Megan Quinn sunk another three to extend the Wildcats’ lead 25 – 18.

Villanova’s second quarter defensive pressure held the Gaels scoreless until the 2:09 mark of the quarter. St. Mary’s cut back into Villanova’s lead and were only down four points to close out the half, but the Wildcats had the advantage, 28–24, at the end of the half.

Villanova maintained a healthy 10-point lead at the 5:05 mark in the third quarter as junior guard Jordan Dillard executed an and-one, the old–fashioned 3-point play.

Villanova held the advantage 38–28, but St. Mary’s senior star Lauren Nicholson would not back down. Nicholson brought her Gaels back by cutting Villanova’s lead to just three points by the end of the quarter.

The Gaels carried the comeback momentum from late in the third quarter over into the fourth quarter. With 6:11 left in the game, the Gaels took a 51 – 50 lead and did not look back.

Caroline Coyer shaved the Gaels’ lead to four with 0:42 left, but her efforts were not enough to mount a comeback. The Wildcats missed crucial threes down the stretch and could not regain momentum nor the lead.

Villanova relied too heavily on the three, which ultimately cost it the championship. The Wildcats shot a season high 43 3-point attempts and only made nine of the 43.

Villanova’s dependency on the three ball proves to be a crutch more than an edge when the three-pointers are not falling. Shooting just 20. 9 percent from beyond the arch and getting outrebounded, 47–39, hindered the Wildcats’ performance in the championship game.

Nonetheless, the west coast outing was successful and was a few missed 3-pointers away from being a huge success. Both Katherine Coyer and Megan Quinn were named to the All-Tournament Team and look to continue their hot-streak moving forward in the season.

The 5-3 Wildcats travel to Washington, D.C. to take on George Washington this Sunday.

George Washington is currently 6-3, including a double-overtime win over ranked Iowa. This game should shape up to be a very close match between two solid programs.

The Wildcats will have to keep their focus as well, as they won’t be able to return to the Pavillion just yet.