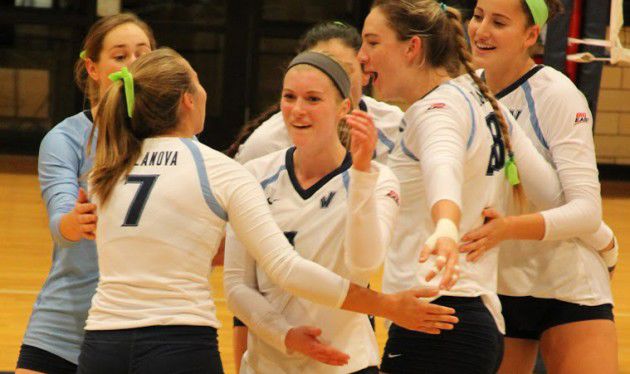 After an excruciating wait, the volleyball team erupted in celebration Sunday evening as its name was called as one of the 32 at-large bids to the NCAA Tournament. This continues the saga of historic success the Wildcats have experienced this season.

Sophomore defensive specialist Allie Fitzgerald commented on the energy in the room while viewing the selections. “When Villanova popped up on the screen we were all so excited, screaming and hugging and jumping around,” she said. “It was the greatest moment ever.”

The team fell short in the Big East Championship game the night before to Creighton, forfeiting an automatic bid to the tournament. ‘Nova had played the Bluejays tight earlier in the season but dropped the match in three sets (25-18, 25-18, 25-17).

The first set of the championship remained close until Creighton went on a six-point run, extending its lead to 13-6. The Bluejays maintained the lead from that point forward. While the Wildcats never led in the second game, the third set remained much closer. Only with a one-point lead at 15-14 did Creighton manage to pull away to secure the sweep.

While ‘Nova ousted Xavier in the semifinals with arguably its cleanest performance of the season, it did not match up well against the Bluejays in the finals. Creighton dominated defensively at the net with 11 total blocks to the Wildcats’ three. Additionally, ‘Nova’s typically strong service game was lacking, allowing the Bluejays to run their offense at will.

The loss to Creighton highlighted some weaknesses to address, but the team’s first return to the Big East championship since 2011 was still a success. Both Amanda Pederson-Henry and Emma Pettit received an All-Tournament team nod, and the second place conference finish kept the Wildcats’ postseason hopes alive.

In receiving one of the at-large bids, the team will return to the NCAA Tournament for the first time since 1997. It will travel to Penn State on Friday to face Dayton in the first round.

Unlike ‘Nova, Dayton secured an automatic tournament slot with its Atlantic-10 conference championship over Saint Louis. With an overall record of 26-5, the Flyers seem to match up fairly evenly alongside the Wildcats.

Both teams boast an impressive opponent attacking percentage. The Flyers and Wildcats hold teams to percentages of .162 and .174, respectively. This can be attributed to each team’s aggressive presence at the service line, as they both average about 1.5 aces per set.

With such even play defensively, authority at the net will undoubtedly determine which team will prevail. ‘Nova has placed a large focus on improving its block, but Dayton still averages more blocks per set. The Wildcats will have to slow the offensive weapons of Jill Loiars and Alaina Turner from Dayton as well.

The Flyers and Wildcats faced two mutual opponents during its regular season. Considering both teams improved throughout the season, the sweep against Marquette in early August doesn’t provide a clear comparison. However, Dayton’s late-October match against Xavier shows a more realistic idea of matchups. The Flyers overcame Xavier in five sets, while ‘Nova won two out of its three meetings with the Musketeers.

Even though Dayton reached the second round of the NCAA Tournament last year, the Wildcats remain sure in their abilities. Fitzgerald notes, “As long as we play with confidence and capitalize on our serving and passing strengths, our offense can outscore anyone we face.”

If ‘Nova can make it past Dayton, it will face the winner of the Penn State–Howard matchup on Saturday.

Fitzgerald explained, “[Our coach] told us that no matter what happens, we’ve had a great season and nothing can take away from that.” Regardless of what this weekend holds, the team has already etched its name in Villanova volleyball history.