Booth searching for his rhythm in sophomore campaign 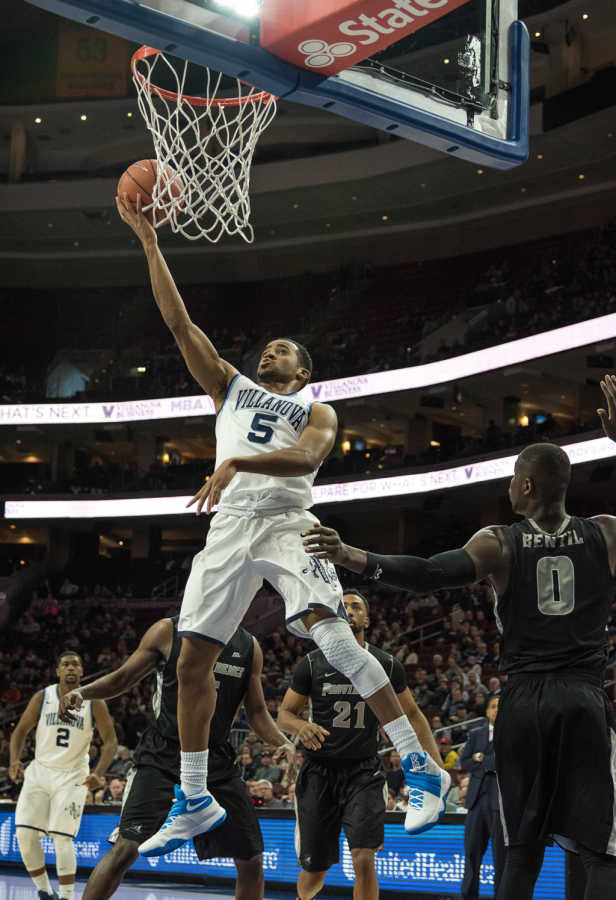 Last season, sophomore guard Phil Booth was a revelation off the bench for the Wildcats. The Baltimore native excelled as Villanova’s backup point guard, providing second unit scoring at an astoundingly efficient rate and displaying the ability to run ’Nova’s offense as a secondary option.

Booth’s first impression was so strong that he was proclaimed “Villanova’s star in waiting” by the Philadelphia Inquirer last March.

This year, however, Booth has struggled to produce at the same levels he reached during his freshman campaign. With junior guard Josh Hart’s move into the starting lineup at the start of the season, Booth was promoted from role player to sixth man, though his role behind senior guard Ryan Arcidiacono and freshman guard Jalen Brunson remains similar to what it was last year when he backed up Arch and senior guard Dylan Ennis. But while his responsibilities have increased, his numbers have taken a hit.

Booth is playing 22.7 minutes per game this season, up from 14.5 in 2015, and has started four games already this year after coming exclusively off the bench last year.

Despite the minutes bump, he is only scoring only one more point per game (5.8 to 6.8 PPG); even though he has already taken almost as many shots this season (125) as last season (128).

That can be chalked up almost entirely to Booth’s inability to convert shots at an efficient rate. His shooting slash line has dipped from a preposterous 56/49/74, (FG%/3FG%/FT%) in 2015 to a much less satisfying 36/29/82 this year.

Booth has been slightly better since conference play began, but his performance in ‘Nova’s overtime loss to Providence on Sunday (four points on 2-6 shooting, including 0-3 from behind the arc, with four turnovers), dropped his 2016 conference slash to 40/33/69.

After a season in which Booth led the Wildcats in offensive rating, he now has the lowest on the team. He is the only Villanova player playing more than 10 percent of the team’s minutes that is scoring fewer than 100 points per 100 possessions, per KenPom.com.

So what has changed for the sophomore guard?

For starters, one could make the case that Booth appears to be less aggressive driving to the basket. According to data from Hoop-Math.com, Booth converted on 77.1 percent of his field goal attempts at the rim in 2015. He was assisted on 37 percent of those makes.

This season however, not only has he been less effective near the hoop (53.1 percent), but he’s been assisted on those makes more too, with 52.9 percent of those field goals assisted. Additionally, Booth’s free throw rate has dipped, from 35.9 percent to 27.2 percent.

In other words, when Booth has driven to the hoop with the intent to score, not only have those forays into the paint been less efficient than in the past, he has been less effective at drawing fouls as well.

Without that boon from the inside, Booth’s struggles from behind the arc, where he has taken nearly 50 percent of his shots, have become even more glaring, though they’ve only been par for the course for this Villanova team, a point that has been driven home ad nauseam by seemingly everyone this season.

Secondly, Booth’s new role within head coach Jay Wright’s system may be contributing to his difficulties through the first half of the season. Booth is no longer the eighth man benefitting from a starting lineup full of juniors and seniors like Darrun Hilliard and JayVaughn Pinkston.

Now, Booth is the first guy off the bench and a spot starter. KenPom.com has upgraded him from a “role player” to a “significant contributor” as a result of his increased usage rate, which has bumped up to 20.2 percent from 17.8 percent.

Due to this more prominent position within the Wildcat hierarchy (and due to how well he played during his freshman year), teams are more willing to key in on Booth.

Last season, he was often the fourth or fifth option on the floor offensively. This season, opposing teams have recognized the danger that he presents on that end and have done a better job of containing him.

Combine that with an expected regression from last season’s lofty efficiency numbers and one has a ready-made recipe for a sophomore slump.

Regardless of the reason for Booth’s step back this year, one thing remains clear: the Wildcats are counting on him to make the necessary adjustments and produce as one of their best scoring options both this season and in the future.

Booth’s career slash currently stands at 46/39/78 through 56 games, and it is reasonable to expect his play in the future will yield numbers closer to that larger sample size than the 20 games he has played this season.

Either way, there can be no debate that Booth’s stellar play was a big part of Villanova’s 33-win season in 2015, and if the Wildcats are going to make noise in March they are going to need Booth to return to form sooner rather than later.