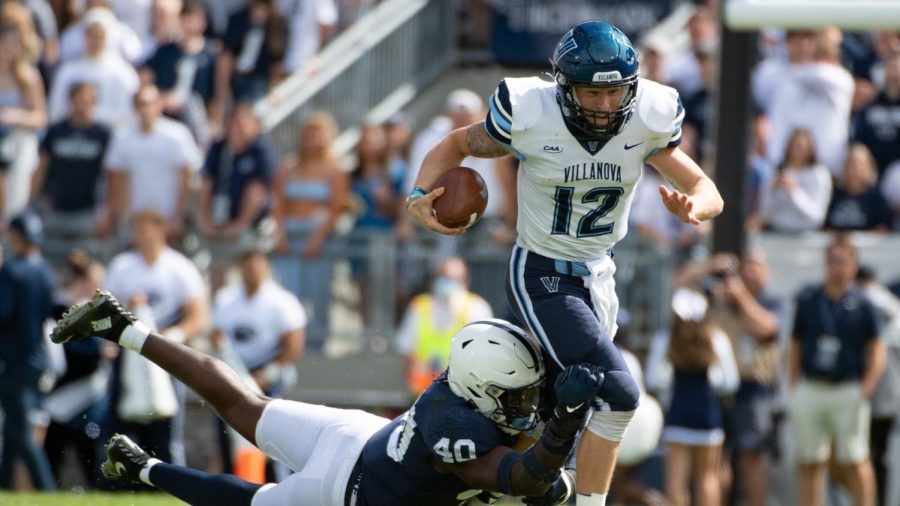 Wildcats QB Daniel Smith threw for 222 yards and two TDs in the loss.

The word that’s been flying around the Villanova football team all season is “resilience,” and that’s exactly what they showed on Saturday when facing the number six ranked FBS program, Penn State. Despite finding themselves in a big hole late, Mark Ferrante’s squad kept battling, scoring two fourth-quarter touchdowns in their 38-17 loss at Beaver Stadium in front of 105,000 fans.

“We were fortunate enough to get a couple balls in the end zone late in the game,” Ferrante said. “So just again, real proud of the resiliency, that’s the word that keeps coming up, and the way they stuck together. This is a good group, it’s a mature group. I think this will carry us forward.”

The two late scores for the ‘Cats came on beautiful throws from graduate quarterback Daniel Smith to standout junior wide receiver Rayjoun Pringle, who finished with a team-high 107 receiving yards. The first was a 57-yarder, capping off an eight-play 72-yard drive, and the second was from 17-yards out on a ten-play drive that started at the Wildcats six-yard line.

While the ‘Cats finished the contest strong, they were hurt immensely over the first three quarters by big play after big play. On Penn State’s first offensive snap, quarterback Sean Clifford threw a 52-yard bomb to Jahan Dotson, putting the Nittany Lions up, 7-0. Following a Wildcat drive that ended in a field goal, Clifford threw another 52-yard touchdown, this time to Parker Washington, who had a game-high 148 receiving yards. A third-quarter 83-yard pass to KeAndre Lambert-Smith gave the Lions their third 50-plus yard touchdown throw of the contest and made it a 21-point game.

The rushing defense, however, was a different story for the Wildcats. On 34 attempts, James Franklin’s team only rushed for 80 yards, their second-lowest total of the season. ‘Nova’s defense didn’t allow a single 15-plus yard rush and totaled eight tackles for loss. Graduate linebacker Forrest Rhyne starred on the defensive end of the ball, leading the Wildcats in tackles (11), tackles for loss (2.5) and sacks (1.5).

Much like Penn State, Villanova’s run game struggled, rushing for only 58 yards on 26 carries. Jalen Jackson led the Wildcats ground attack, rushing seven times for 58 yards, including a 20-yard burst on the second fourth-quarter touchdown drive.

In addition to Pringle’s big game, the Wildcats got solid contributions from junior wide receiver Jaaron Hayek and senior tight end Todd Summers. Of his six targets, Hayek hauled in four of them for 26 yards, with a long of 17 yards. Summers caught all five of his targets, totaling 45 yards, 35 of which came after the catch, helping Smith throw for 222 yards on the day.

Injuries are always a fear when playing teams with the athleticism and stature of Penn State. They’re something Ferrante mentioned the team wanted to avoid on Saturday, and they did for the most part. Only one injury took place all day, and it came on the opening kickoff of the second half when graduate tight end Tyler Will went down after making a tackle. The injury looked scary, and Will was taken off in a stretcher, but he was alert and moving when he headed to the hospital as a precautionary measure for a concussion.

“He’s doing okay, from everything we heard,” Ferrante said. “We actually hear he might be coming back and joining the team to go home with us, so that’ll be huge if that’s true.”

While Ferrante isn’t a believer in moral victories, he’s thrilled with the way his team fought until the very end, never hanging their heads.

Villanova has a bye week next week, before resuming conference play and traveling to face FCS third ranked James Madison.