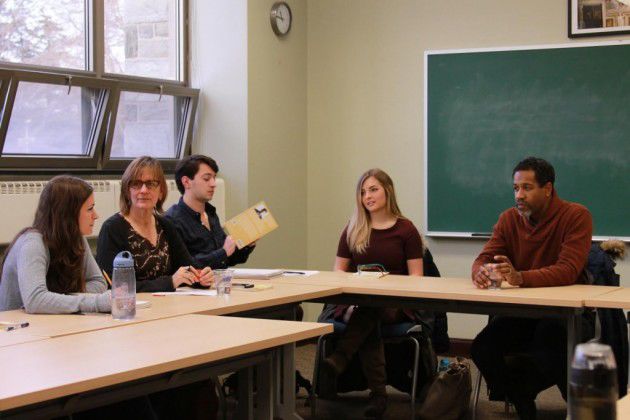 Some of the students and staff who showed up to Gregory Pardlo’s reading for the Literary Festival on Thursday came specifically to hear his voice, which was warm and quick to laugh and coaxed the room into a quiet but palpable anticipation.

“Getting meaning is easier when you can hear it read aloud,” said sophomore English major, Lauren Reeves, who had read a few of the Pulitzer Prize winner’s poems prior to the reading.

Others came for more practical reasons: extra credit was offered — they always come to these sorts of things — their friends were going and they tagged along.

A few students sought writing advice. Colin Lubner, a junior math major, said he writes often and wanted to hear about Pardlo’s process, the behind the scenes stuff that does not get discussed often. Hearing about that gives him hope, he said.

He and his friends, two other juniors studying math and economics sitting beside him, had gone into the city to see Margaret Atwood read last year and they all were affected by it. All of them agreed hearing a writer read aloud and share their experience was so different than reading their work on the page, which was why they had come to Pardlo’s reading and sat near the front, one of them clutching Pardlo’s shiny new book he just purchased.

For all of those reasons and more, around 50 people sat at attention in the Connelly Cinema Thursday night as Pardlo paged through his collection. His poems detailed Philadelphia, the black experience, his father, his daughter, images from his upbringing in Willingboro, New Jersey and references to his life now as an academic getting his PhD and MFA at the same time – things that were near to and far from the lives of his audience.

As he read, no one made a sound except for the occasional “mmms” and sighs at particularly pretty language. When he finished, he smiled at the generous applause by a clearly impacted group of young students. They flung their hands in the air to ask questions, which is part of the reason why the Literary Festival reading can be such a special event.

The Literary Festival, a class co-taught by Professor Allen Drew and Dr. Lisa Sewell, invites five known and respected poets and fiction writers to Villanova to give a reading and sit in on a class period while students, who have read their work beforehand, ask them questions.

Pardlo said his classroom experience was fantastic and that the students asked some deep and probing questions.

“I just went back to the hotel room and cried. I felt so exposed!” Pardlo joked.

Aside from a beautiful reading, Pardlo offered what Lubner was hoping for: advice.

“The muse is an awful writer,” Pardlo said. “Do not trust the muse to write for you.”

He suggested young writers make a habit of writing and cultivate a culture that allows for inspiration instead of waiting for it to strike. That, according to Pardlo, just does not happen as often as one wants it to.

At the end of the reading, students could not stop asking questions. Audience members approached Pardlo and catalogued the ways his work impacted their life. A lengthy line formed at the back of the room as he sat down to sign copies of his book, which is only his second collection.

Pardlo recalled the first poem that ever spoke to him. He remembers it was a piece by Pattiann Rogers that immediately seemed to reach out and gesture at him.

Now, due to the Literary Festival, his work has made an impression on dozens of Villanovans.