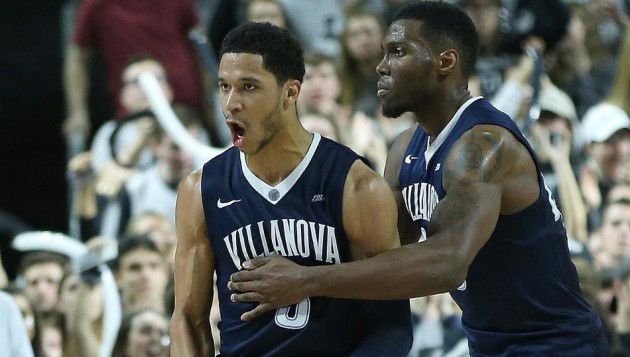 Back in 2012, Jay Wright and his coaching staff brought in two stud recruits, in guard Ryan Arcidiacono and center Daniel Ochefu. Since both were rated at 94 overall by ESPN Recruiting, the Villanova fan base could not wait to see how the successors to Maalik Wayns and Mouphtaou Yarou would step into their roles on the team.

The following year, after Arcidiacono and Ochefu helped the Wildcats make the NCAA tournament, the team welcomed a trio of recruits onto campus. The 2013 class was not nearly as anticipated as the previous year’s recruiting class. However, that trio of Kris Jenkins, Darryl Reynolds and Josh Hart is on track to go down as the most successful class in Villanova history.

Now juniors, Hart, Jenkins and Reynolds are all leaders on the best team in the Big East. Their bond with each other is one that started from the first day they arrived on campus. Off the court at their first Hoops Mania dance-off was where they became fan favorites.

“We seemed to click over the summer but the dance-off definitely did bring us closer together,” Reynolds said. The three made the crowd erupt with a perfectly choreographed dance to Vanessa Carlton’s “A Thousand Miles” and received a perfect score of 40 from the judges, ultimately winning the contest in their first year.

Although they became fan favorites to the student body after their epic dance-off victory, it was their first big road trip that really made the three household names for Villanova fans everywhere. Hart and Jenkins each hit critical 3-pointers throughout the tournament against both Kansas and Iowa, while both played more than 20 minutes in the championship game vs. Iowa.

As the final seconds ran off the clock in overtime, senior James Bell and Arcidiacono were accompanied on the floor by a surprising group of three freshmen as they clinched the Battle 4 Atlantis championship. “It was big,” Reynolds said. “We learned a lot about each other, us three in particular because we were so close. We all found success in different ways down there. It was definitely a pivotal trip when I look back on it.”

Since that magical run in Atlantis that put Villanova basketball back on the national stage, those three role players as freshman have grown into three pivotal junior leaders on one of the nation’s top teams. Their leadership had never been as evident as it was on Saturday against Providence on the road.

All three of the juniors recorded double-doubles, with Hart scoring 14 points and grabbing 13 rebounds, Jenkins putting a 10 spot up in both categories, and Reynolds having an enormous game, finishing with a team high 19 points while grabbing 10 boards as well.

“This was the game of Reynolds‘ career but we see this everyday in practice. Everybody else got to see it today,” Wright said to Fox Sports 1 after the win against Providence.

Coming into the season, Reynolds and freshman Tim Delaney were expected to provide depth in a frontcourt that had just lost JayVaughn Pinkston. However, Delaney suffered a season ending hip injury before the season started, making Reynolds the lone backup big man on the team.

At the beginning of the season, Reynolds was able to give the team quality minutes off the bench but never surpassed six points or rebounds in a game. Having many other weapons surrounding him, the team seemed content with Reynolds’ production.

That would quickly change after Ochefu went down with a concussion and the team desperately needed Reynolds to fill the void. After never playing more than 20 minutes in a Big East game in his entire career, Reynolds answered the call to be the Wildcats’ go-to big man.

Since Ochefu’s injury, Reynolds has been the anchor in the middle, averaging nine points and just over 10 rebounds per game while averaging an incredible 32 minutes per game. Reynolds’ success has been such a welcoming addition to an already dangerous Big East powerhouse.

After scoring 4.1 points per game as a freshman and 6.3 as a sophomore, Jenkins has come alive as not only a deadly shooter, but also an all-around lethal scorer. He is averaging 11 points per game including three games surpassing the 20-point plateau.

He has developed a post game to go along with an already superb stroke from deep. However, what might be the most dangerous move in his arsenal this season has been his incredibly believable pump fake. The mature move can lead to either a foul by an opponent drawn up into the air or an open path to the hoop created by the pump.

Not only has Jenkins been establishing himself as a dominant scorer, but he is also showing his capability as a rebounder and defender. Without Ochefu, Jenkins has picked up the extra rebounds, finishing in double figures in two of the three games. “I just got to give credit to my teammates,” a modest Jenkins said on his recent success. “They do a good job of making plays, making the right play.”

Although Jenkins and Reynolds have been gaining the attention of Villanova fans, it’s the third member of the trio that has been collecting national attention.

After excelling as a bench player his first two seasons and being named Big East Sixth Man of the Year last season, Hart has jumped into the starting lineup and has not looked back since.

There are stars and potential NBA lottery picks in the Big East, such as Kris Dunn and Henry Ellenson, but no one else in the conference can say that he has scored at least 10 points in every game this season.

“Josh Hart is probably the most improved player in the league,”  Creighton head coach Gregg McDermott said. “I remember two years ago we didn’t even guard him from the perimeter and now he’s knocking down threes.” He is now hitting 52 percent of his shots this season.

He has also been named a finalist for the Jerry West award, given annually to the best shooting guard in the country.

“I hope people will stop calling me a forward now,” Hart jokingly posted on his twitter account after hearing the news on his nomination.

Three of the funniest personalities on the team, Jenkins, Hart and Reynolds have also been some of the most exciting players to watch this season. The only thing that is potentially more exciting than watching them grow from role players to crucial starters is looking back and seeing how much they have grown as teammates and brothers.

“That ability to be a great senior comes from at a point in your junior year where you bust through and the seniors and players below you see that this is the next great one. Not great scorer, but this is the next great Villanova basketball player,” Wright said on his weekly television show, “Inside Villanova Basketball,” which airs on Comcast Sportsnet. That time has come for these three juniors.

They are no longer the overlooked recruiting class from 2013. The juniors are three of the most important players on one of the nation’s best teams.

They are proving to the team and the nation that they are the next great Villanova players.