‘Nova vs Penn State: The Game We’ve All Been Waiting For 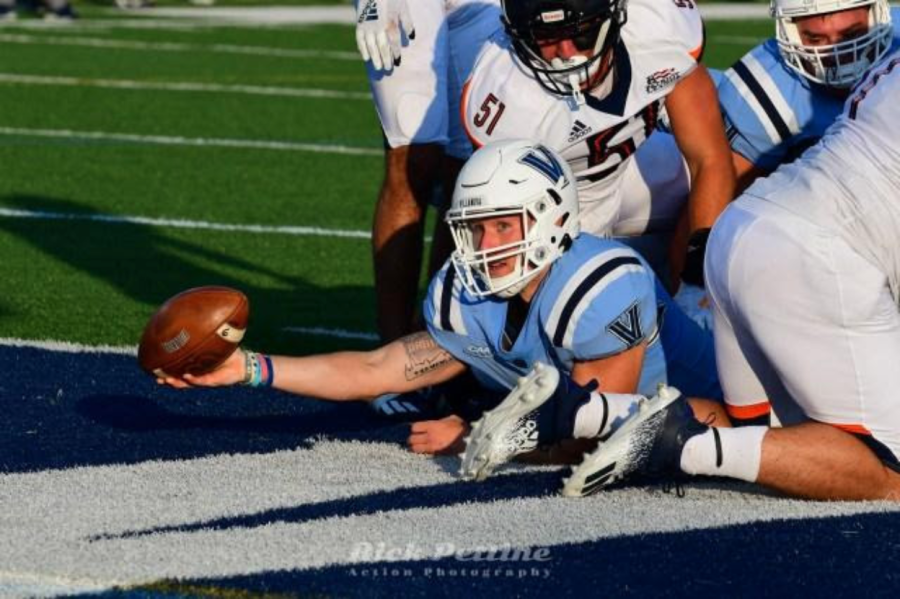 Villanova quarterback Daniel Smith rushes for a touchdown against Bucknell at Villanova.

As a lifelong Penn State football fan, I will be watching with much interest as PSU hosts Villanova at Beaver Stadium on Saturday, Sept. 25 at 12 p.m. As a blue blood, Big Ten powerhouse, the Nittany Lions will handle their business against the Wildcats. However, they play the game for a reason, and if the Wildcats want to stun the Nittany Lions, they will have to stop some key players and overcome the crowd.

With limited fans last season, Beaver Stadium was an eerie ghost land, especially when Penn State hosted Ohio State on Halloween last year in a highly anticipated primetime matchup.  The fans are now back and in full force. When Penn State hosted Ball State in its first game at Beaver Stadium with fans since 2019, the crowd was going crazy in a huge blowout win over Ball State. The White Out was hosted early this year when Penn State hosted SEC powerhouse Auburn on Saturday night, which is one the coolest spectacles in college football. Beaver Stadium can host more than 110,000 fans, and while Saturday’s contest may not be as raucous as the Auburn game, the Penn State faithful will drown out the Villanova supporters. The players will have an experience they will never forget as they play in one of the most storied stadiums in college football.

Villanova will have to game plan for Penn State quarterback Sean Clifford, who has thrived so far under new offensive coordinator Mike Yurcich. Clifford has taken much better care of the football this season as he has not turned the ball over once this year. According to ESPN.com, he has a 62.9 completion percentage as he has completed 39 of 62 passes. He has thrown for 477 yards in two games, has an average of 7.7 yards per attempt and has thrown for two touchdowns (per ESPN.com).

Clifford has learned much from Yurcich. As the centredaily.com reported, “We’ve learned being efficient on first and second down is a huge factor in the game.”

“I think that we’ve seen that play out pretty well,” Clifford said. “Once we get in third-and-short, we’re pretty good there. … I think that the other big thing is securing the football and no turnovers. That was a point of emphasis in the offseason.”

Another weapon the Wildcats will have to slow down is Penn State wide receiver Jahan Dotson, who has been a favorite target of Clifford. Dotson has been a consistent deep ball threat for Clifford and has had some big plays, including a 49-touchdown strike against then number 12 ranked Wisconsin and another 25 yard touchdown reception against Ball State. He has five receptions in each of Penn State’s first two games.

The Villanova offense is going to have to bring its recent good form to Beaver Stadium as the Penn State defense has looked stout so far, giving up only 10 points to Wisconsin and 13 points to Ball State. Villanova trounced Bucknell, 55-3. on Sept. 11. The starting quarterback, Daniel Smith, tossed three touchdown passes and ran for another in the first six series as he pulled early in the blowout situation, per Villanova.com. He is going to need that type of performance for four quarters to keep up with Clifford and the Penn State offense.

Villanova is going to need to play its best game, as head coach Mark Ferrante commented after the win over Bucknell.

According to Villanova.com, Ferrante said, “Similar to last week I am really excited about the fast start we were able to get. The offense was moving the ball, the defense was getting turnovers and getting us great field position, and then obviously special teams with that blocked punt got momentum going in the right direction and gave us great field position as well.”

Villanova’s defense played well against Bucknell, especially cornerback Christian Benford, who registered a pick six on a 19 yard return. He now has four interceptions in his first two games and will need a shutdown performance against Dotson and the Penn State wide receivers.

This should be an experience every player on the Villanova team will always remember. Whatever the result may be, playing at Beaver Stadium against one the best programs in the country will prepare the team for the rest of its CAA schedule.