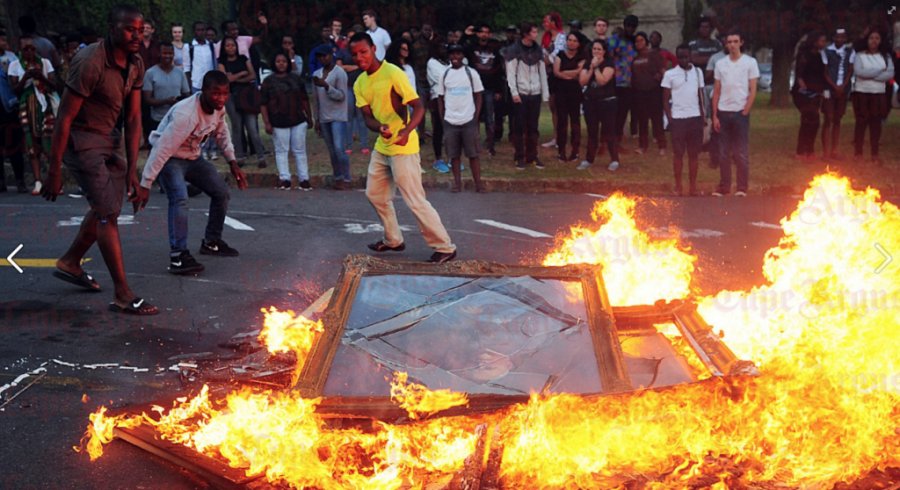 Two Villanova students are studying abroad at the University of Cape Town amongst riots, rubber bullets and flash grenades. The Rhodes Must Fall Movement has initiated protests on campus leaving international students afraid to leave their residencies.

The Rhodes Must Fall Movement aims to mobilize action against institutional racism at the university. Members, urging “REAL transformation,” call for the dismantling of decolonization and white privilege. “Rhodes” refers to Cecil Rhodes, the British Prime Minster of Cape Colony in the 1890s who is often credited with segregating and disenfranchising the South Africans.

“UCT students, workers, academics and interested staff refuse to be alienated in their own university,” the movement’s website states. “If the institution will not bring true transformation to us–we will bring it to them.” Rhodes Must Fall cites the university’s housing situation as one example of white supremacy on campus.

On Feb. 15, Rhodes Must Fall activists erected “#Shackville” –a metal shack and a portable toilet that represents “the new res[idence] for Black students who are #HomelessAtUCT.” The movement hopes to raise awareness of the university’s housing problem. News24 reported bonfires in the parking lot where activists burned paintings and portraits taken from the university’s halls.

The university has been updating students on their website with details of the protest and shacks. The use of stun grenades by Public Order Policing was required to control the crowd.

“[Rhodes Must Fall] refuse to speak with the executive [director] but consistently verbally abuse and threaten,” Gerda Kruger, executive director of the communication and marketing department, said in a letter to students and colleagues.

“The [activists] entered [various university buildings], removing artwork from the walls and burning it. They are traumatizing wardens and students and vandalizing. The behavior by RMF members is criminal and has exceeded all possible limits of lawful protest action. We are deeply concerned for the safety and staff. We call on all students to refrain from supporting RMF in these actions and to vacate the area.”

Michelle Ahn, a Villanova junior political science and econ major, came to Cape Town to study in the humanities and commerce division. On the third day of classes, she found herself listening to the sound of riots, helicopters surrounding campus and the burning of paintings and a shuttle bus.

“I came here to study racial reconciliation, but this is getting unbelievable,” Ahn said. “I’m torn about the protests and my safety. Being an ally is something I’m committed to, and at the end of the day, their cause is that a radical post-racial transformation has still not taken place 20 years post-apartheid. But [the activists] have taken this cause and poured in so much violence and vitriol which may or may not be justified. The members have threatened students and police with fire to prevent the police from coming in and shutting down the demonstration.”

Ahn has only been in the city for less than three weeks, and she has only seen the protests escalate on Tuesday. “I feel unsafe in a number of ways,” Ahn explained.

“There’s been a series of rapes on campus that have not been adequately addressed. I think I feel safer than my white friends walking around campus, protected by ironically enough, the color of my non-white skin. I’m scared to be on campus at night time . . . I don’t feel safe in the sense that UCT is not doing an adequate job shutting down these protests before it reached this level.”

In a letter on the University’s website, Dr. Max Price, Vice-Chancellor of UCT, said, “It is utterly regrettable that a movement that began with such promise and purport to be fighting for social justice matters has now deteriorated into a group that engages in criminality and has only one agenda namely to close UCT operations down. Their behaviour is utterly unacceptable and can in no way be tolerated.”