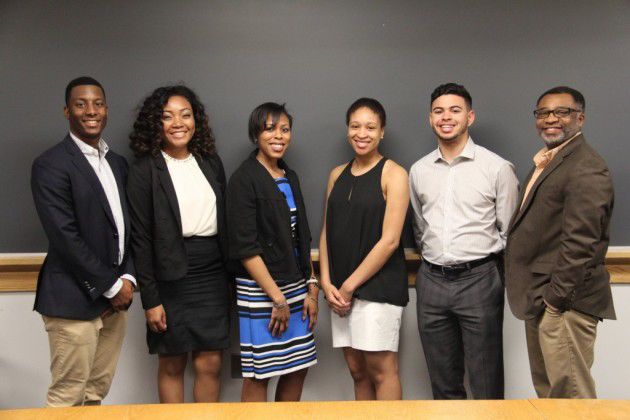 The Edward Collymore Honor Society inducted its third group of students on March 11 in the Rosemont Room. On this day, the achievements of the incoming members Zachary Hogan ’18, Princess Garrett ’18, Luis Miranda ’17 and Jonathan Pryor ’17 were recognized to highlight why they were exactly chosen to be a part of such a prestigious honor society. The honor society is fairly new, and what makes it unique is that it is a multicultural one, which is one of a kind on the University’s campus.

Created in 2014 by founding members Tiffany Ferrette, Elbert Maxwell, Jordan Perry and Sydney West, the society recognizes those scholars of high moral and academic integrity within the multicultural community on campus. The group’s mission is also to foster academic and professional improvement and to encourage individual excellence in order to empower the multicultural community to make a substantial impact at the University. The founding members serve as role models for the groups as they have all graduated and went on to do amazing things. Sydney West ’15, is now working with Morgan Stanley in the Hong Kong Division. Elbert Maxwell ’15 is training for the 2016 Olympics and has just recently qualified for the indoor USA championships in Portland, Oregon. Jordan Perry ’15 is an entrepreneur with a business called Simpme. Lastly, Tiffany Ferrette ’15 has just finished Fulbright scholarship in Columbia. Preseident Fatoumata Camara explained how she hopes to continue the legacy of the group by explaining how important it is to have something unique like this on campus.

“The Edward Collymore Honor Society is first and foremost an organization established to perpetuate academic excellence and professional development among the multicultural community at Villanova,” Camara said. “We feel that as students of color it is our duty to create a space for students of all backgrounds to feel that their achievements are recognized, supported, and valued.”

The honor society prides itself on the values of character, leadership, academics, scholarship and service (CLASS for short). These qualities are what all the current members embody and are what anyone who is interested in joining should embody. The members hope to serve as role models for the University but also serve as a resource for anyone who may need the group’s assistance. Throughout the year, the group hosts speakers, study sessions, professional development workshops, opportunities to do service and other events that they hope brings together groups from all disciplines. Not only does the group want its members to excel in the classroom, but they also want them to make an impact on the campus before they graduate.

The group currently has eight members including its new inductees. Members Fatoumata Camara, Fatima Doumbia, Da’Vion Lewis and Natalie Galvez will all be graduating this spring. This means that the new inductees will be in charge of continuing the group’s legacy. The Edward Collymore Honor Society hopes to grow its membership as well as make itself better known around the university through the various activities it will host. One way the group plans to do this is through a multicutltural spring dinner this semester to showcase the diverse groups on campus.