Pay no attention to that college behind the curtain 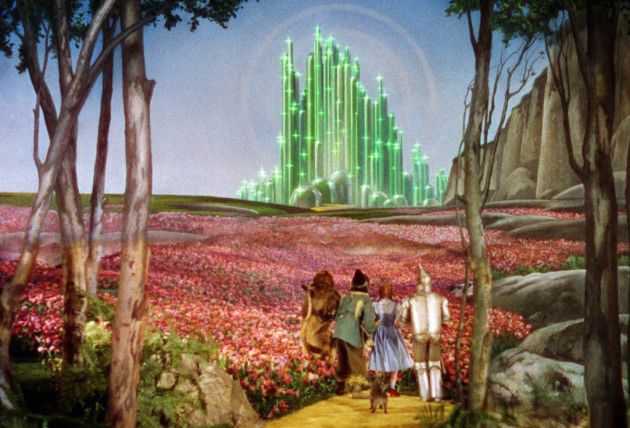 After a long and arduous journey across the treacherous terrain of the Land of College Preparation, the weary but hopeful college applicant finally arrives at the Application City. Mesmerized by the glistening, radiant artifice, he ventures inside the holy gates of the Palace of Branding, enamored by the life full of success and happiness that it promises.

With a brain full of AP courses, a heart bursting with volunteer work, and a sense of courage that has resulted in leadership positions in numerous clubs, the student stands before the Wizard of Branding, listening to the sweet, succulent words that flow eloquently from his lips: “We’re number one! (…in the regional North category). Our basketball team is the best in the nation! (…it just hasn’t won a national championship in the last 30 years). Look at our how nice our business school is! (…don’t mind that tall, old building by the monastery, we’ll get around to it at some point).”

With no Todo to pull back the curtain and free the student from this siren song of statistics and accolades, he succumbs to The Oz Phenomenon, surrendering his stellar SAT score and academic profile to the Wizard, never once questioning the meaning behind the figure’s intoxicating rhetoric. The master of branding has done his job yet again, coercing the young mind into applying for entrance into his kingdom, thus making it even more desirable for the next impressionable soul who stands in his midst.

In our post-modern consumerist culture, empirical, quantifiable evidence has emerged into a tremendous position of authority given its appearance of accessibility. In accordance with this shift, universities have directed their efforts away from the supply model of a college education – one that focuses on attributes such as individual development, knowledge, and critical thinking – and turned them towards the demand model, placing particular emphasis upon characteristics such as branding visibility, solvency, and impression management instead. This teleological realignment has deep roots within the Carnegie Classification system employed by U.S. News & World Report, for administrators seek to rebrand and remodel the popular perception of their school so as to achieve the end of a higher ranking in the heated competition for college candidates.

The Carnegie Classification was developed in 1970 by the Carnegie Commission on Higher Education, which aimed to provide support for its program of research and policy analysis through the creation of an organized system to rank colleges and universities. Originally published in 1973 and updated six times since then, the Carnegie Classification has sought to represent institutional differences in a manner that reflects the current state of higher education as a whole. The Carnegie Classification system has been adopted by U.S. News & World Report under different names for its annual “Best Colleges” ranking, as the publication divides institutions into four categories: “National Universities”, “National Liberal Arts Colleges”, “Regional Universities”, and “Regional Liberal Arts Colleges”, and ranks them accordingly within each section.

This past year, 1,376 schools submitted information to U.S. News & World Report, subjecting themselves to a ranking process that incorporates the components of undergraduate academic reputation (22.5% weight in the ranking formula), student retention (22.5%), faculty resources (20%), student selectivity (12.5%), financial resources (10%), graduation rate performance (7.5%), and alumni giving rate (5%). This information, according to U.S. News & World Report, serves as an accurate reflection of an institution’s student body, faculty, and financial resources, as well as a strong representation of how well the institution does its job of educating students.

These rankings act as the ideal metaphor for the wave of branding that has flooded college campuses over the course of the past century, with the so-called “captains of erudition” steering the demand model ship through the stormy seas, their compasses falsely oriented toward the potential for economic profit over that of student development.

The Oz Phenomenon, or the reallocation of a school’s resources primarily toward those rebranding and impression management efforts, emerged out of a post-modern culture driven by neoliberalism and individualism.

Proponents of neoliberalism argue that government intervention ought to be limited, placing their faith wholeheartedly in the ability of markets and Adam Smith’s “invisible hand”. This market-driven logic has extended into areas such as education, the result of which has been its commodification due to corporatization.

Corporatization is conducive to bureaucracy, in which the triumvirate of specialization, centralization, and centralization reign supreme and calculation and quantification are heralded as gods. In accordance with this system, the demand model has assumed the role of the dominant narrative, as seemingly objective measurements such as research-dependent rankings, acceptance rates, and C.A.T.S. reports take precedence over student development and growth.

As universities concentrate their efforts in these areas, they place their faith in a correlation between branding and an increased number of applications. However, numerous published studies have concluded that this correlation does not connote causation.

For example, a recent article published in Humanity & Society examines this notion of implicit causation through the lens of the supposed spike in college applications following highly visible intercollegiate athletic success, such as the nationally televised come-from-behind victory orchestrated by Boston College quarterback Doug Flutie over the Miami Hurricanes in 1984. The findings of the article challenge the efficacy of using visible sports to attract applicants, highlighting the lack of data that support such a claim as well as noting that many schools exaggerate the ability of branding in part due to the increasingly commercialized and corporatized world of intercollegiate sports and higher education as a whole. As such, adherence to this doctrine may very well be flawed and misguided.

With impression management, all that changes is the perception. Our post-modern infatuation with “the numbers”, treating them as objective measures of truth, has blinded us to the clandestine reality that statistics can be manipulated so as to serve as the means to a desirable end. Just ask Simon Newman, president of Mount St. Mary’s University of Maryland, who suggested that faculty members stop treating students as “cuddly bunnies” and “drown the bunnies” instead so as to increase the university’s retention rate. To be fair to Mr. Newman, he later claimed that he might have stated puppies in lieu of bunnies when he delivered that comment, but the premise remains the same.

We must caution against placing an overwhelming amount of faith in content simply because we can empirically grasp and conceptualize it, for by doing so, we often delude ourselves into imparting upon the simplest distillation of the concept the utmost value, leaving ourselves susceptible to specious spectacles such as The Oz Phenomenon in the process.