‘CATS HEADED TO THE ELITE EIGHT 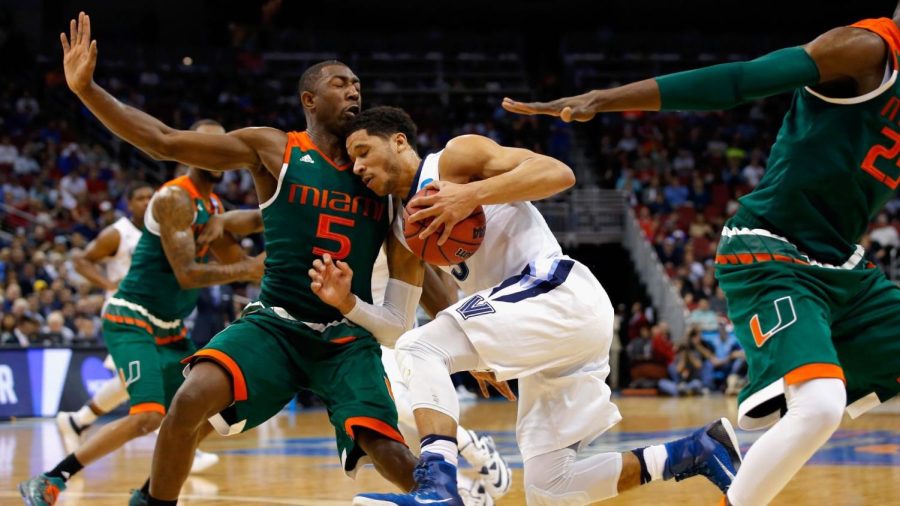 Villanova proved that it wasn’t satisfied with just making the Sweet 16.

The Wildcats did not look fazed, as it navigated through uncharted territory with ease. Villanova downed Miami in convincing fashion, winning 92-69.

With the win, Villanova returns to the Elite 8 for the first time since 2009, thanks to the performances of Ryan Arcidiacono and Kris Jenkins. Arcidiacono and Jenkins both finished with 21 points each. They combined for 15-of-21 overall and 9-of-13 from long range.

As for Miami, it’ll need to wait at least another year for its first trip to the Elite 8.

“It’s definitely special, it hasn’t totally hit me yet, hopefully it won’t hit me until after Saturday’s game,” Josh Hart said. “It’s a great feeling but we can’t be complacent, we’ve got to remain focused, remain humble, just go in there and play Villanova basketball.”

After taking a close 43-37 lead at the break, Villanova was able to put Miami away in the second.

The Wildcats slowly pushed their lead into double digits and kept it there with an Arcidiacono 3-pointer.

From there, Villanova was able to continue to foster and grow its lead. The Wildcats pushed deeper and further into double figures before a Daniel Ochefu dunk and another Arcidiacono three made it a 20-point game with less than five minutes to go.

With a sizeable lead heading down the stretch of the game, Villanova was able to coast to the final buzzer.

However, it wasn’t always easy.

Villanova came firing out of the gates early once again, with Arcidiacono setting the pace.

The senior guard singlehandedly outscored Miami 13-10 in the early stages of the game.

“I wanted to be aggressive from the start, and we did great baseline out-of-bounds play to get me going,” Arcidiacono said. “Then I just was being aggressive for plays that were called for me and just read the defense and I was — I think I was making the right play at that time.”

His play was infectious, as the hot shooting hand was contagious. The rest of his team was able to contribute to a 29-14 start.

Just as Miami had done previously in the game against Wichita State, the Hurricanes stormed back into the game with a 12-0 run that was fueled solely off of 3-pointers. After a couple of more baskets from Miami, Villanova’s lead was cut down to just one.

A layup by Angel Rodriguez made it 31-30 but that would the closest Miami would get to swiping the lead from the Wildcats.

Villanova responded with a 7-0 run to gain some separation and eventually distance itself for good.

“We just got on each other,” Ochefu said. “We had a lot of defensive lapses and we had some bad offensive possessions that led to turnovers. They got three threes in transition. In the huddle, we got on each other, refocused and got back to what we were doing.”

Ochefu finished with 17 points off of 7-of-11 shooting. Hart also crossed the double digit mark, scoring 14 points solely off of shots from inside the arc and free throws. The junior guard did not attempt a single three.

For Miami, the Hurricanes were paced by a game-high 26 points from Sheldon McClellan. Rodriguez, who had scored at least 20 points in each of the tournament games leading up to Thursday, had only 13 points in the loss.

“We’re definitely playing our best basketball right now,” Wright said. “We haven’t played this well in any game this season. And that’s your goal.”

Villanova will hope to continue its hot shooting stroke against top-seeded Kansas in the Elite 8 game. Tip-off is this Saturday night at 8:49 p.m.