Sounding off: The Villanova Sirens 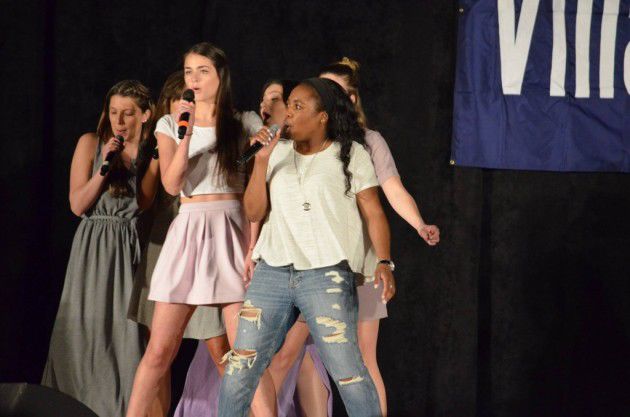 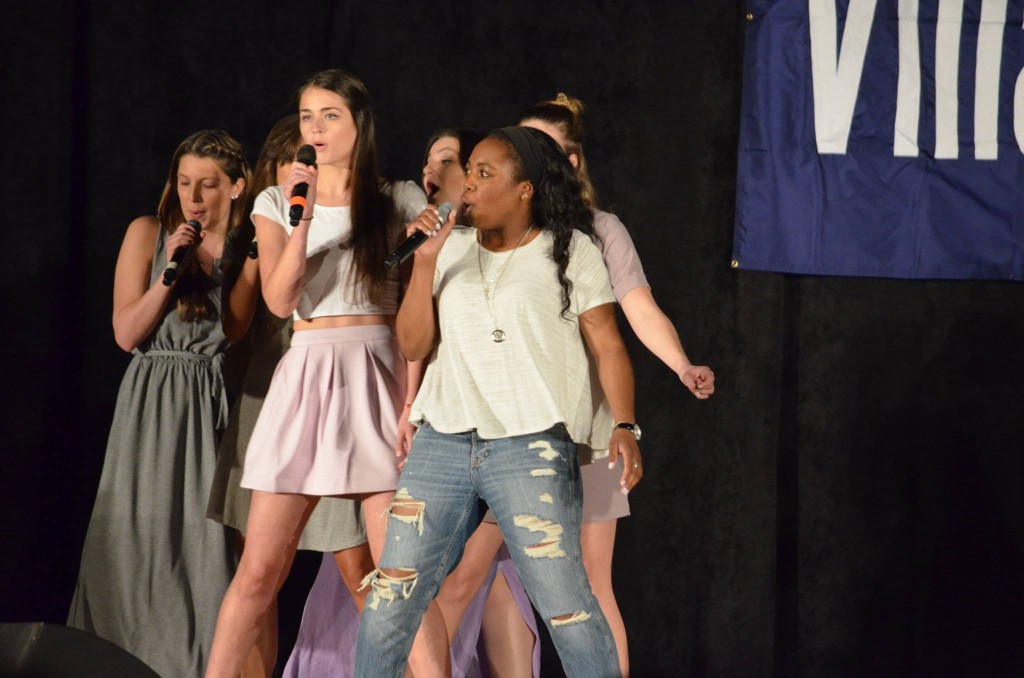 The auditorium is buzzing. Hundreds of people have already shuffled into the Jake Nevin Field House, anxiously awaiting the start of the concert. Behind the velvety, cherry-red curtain, Kirsten Arterburn grabs the microphone, her group in tow repeating lines over and over in their heads. For many, the stage is a frightening space to be avoided. For Arterburn, however, it’s a thrill. As the silence carpets the audience, the curtain rolls up, Arterburn steps out into the light. Then, she begins to sing.

A Cappella Palooza. The biggest night to hit Villanova. A Cappella groups battle it out and showcase the latest mash-up non-instrumental hits. It’s a defining night for Arterburn, her last big concert at Villanova, with her beloved group—the Sirens.

For the graduating senior, the all-girls a Cappella group has become an impactful piece of Arterburn’s time at Villanova. After joining the Sirens her sophomore year, she rose to become musical director to president, mulling over song choices and tediously tuning each melody for perfection.

But it’s not all about the music. In fact, the singing is just a piece of it all. While the performances are adrenaline-pumping, the family unit aspect of the group makes it that much more meaningful.

“It’s being something bigger than yourself,” Arterburn recalls. “We’re all really different but get along because we all have this collective bond over music.”

The singing form, which creates melodic sounds using human voices alone, has a deep-rooted history in the collegiate landscape. Since the early 1900s, university a Cappella groups have continually produced innovative and inventive new performances, including the increasingly popular use of mash-ups and choreography. One of the earliest and most well-known groups, the Yale Whiffenpoofs, was founded in 1909. According to the New York Times Neil Genzlinger December 2013 article, collegiate a Cappella is having a moment, with thousands of groups blossoming across campuses worldwide. A Cappella even got the pop culture makeover as the plot for breakout hits, including Pitch Perfect and NBC’s reality competition The Sing-off.

Arterburn notes the Sirens are quick to try out the latest trends harmonizing the a cappella world. At a Cappella Palooza, the group performed a mash-up of the Chainsmokers “Roses” with Justin Bieber’s mega-hit “Love Yourself.”The group mostly sticks to today’s top hits when performing, as do many of the other all-female, all-male or co-ed groups on campus.

Looking back, Arterburn wouldn’t change a thing. She grew up in a musical family—her parents met in the marching band in high school—and has been singing for as long as she can remember. As she got older, Arterburn joined choir and her high school a Cappella group, but the values and skills she learned in the Sirens are irreplaceable—from software, to music theory, to compromise to dedication.

In order to prepare for the six to seven concerts the group holds per year, the Sirens practice every week for about two hours- whether it is singing or bouncing around ideas for new songs. The group stands in a loose circle in the back corners of a St. Mary’s classroom. Swaying slowly, tapping feet, the inhaling and exhaling of breaths fill the air as the combination of voices swirl together to create a new sound. After hours of hard work, of starting and stopping to perfect the sound, the moment it all comes together is the most satisfying, according to Arterburn.

While it’s hard work, that doesn’t mean there isn’t any fun.

“The first ten or 15 minutes of practice we always end up talking and gossiping—we’re an all-girls group!” Arterburn says with a smile.

Countless performances are in the past. Dozens of practices wrapped up. Endless pre-show nerves relieved. Millions of laughs had.

These are the memories that will stick with Arterburn as she continues beyond Villanova. She hopes to continue to see the persistent progress the Sirens have already made, confident in the newest president to keep the group musically sound.

As for herself, being in the Sirens has made Arterburn assured she will find some way to sing after Villanova a Cappella, even looking into some post-collegiate groups speckled throughout the country. However, she will never forget her most meaningful group, the Sirens.

From the beat-boxer to the soprano to the alto, each siren adds an important and imperative contribution to the melody. Without one, it all sounds and feels off. But together, it is a beautiful harmony.