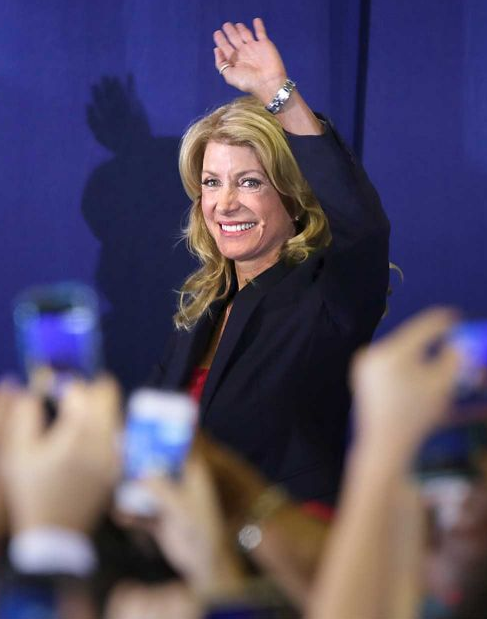 Former Texas Senator Wendy Davis stopped by a “Women for Hillary Phone Bank” held at a Villanova residence last Sunday, April 3, to share her story and pledge her support for Hillary Clinton in the 2016 presidential race.  Davis has traveled around the country advocating for Clinton. Her presentation in Villanova was one of three presentations in the Philadelphia area on Sunday, as part of a larger presentation cycle on a national level. Members of the phone bank gather to call area residents on behalf of Clinton, asking for voter preferences and advocating her campaign.

Davis is considered high profile among past and present members of the U.S. Senate.  She famously stood for eleven hours on the Texas Senate floor in pink sneakers filibustering a bill for stricter abortion regulations in Texas, and was subsequently successful.

During her brief presentation, Davis cited access to affordable health care as extremely important in her ability to work her way up the ladder academically and professionally as a single mom.  She stated that Planned Parenthood was her only health care for four years, helping her to stay on her path to success progressing from community college to Harvard Law School in only a matter of years.

“Clinton stepped up in such a profound and important way for universal health care” Davis said, tying her personal experience to her support of the presidential candidate.

A theme of Davis’s speech particularly relevant to college students was the mention of her age when she became engaged in the political process.  Davis described herself as being disengaged in politics up until her college years, when things quickly changed.

“Watching her [Clinton] as a young woman was such an ‘aha’ moment for me,” Davis said.

When asked if she had a message for college-aged women, Davis had much to say about the power of voices.

“Never underestimate the power of your own voice,” she said.  “Use it as often as you can, particularly in the most important place where you speak: the ballot box.”

Davis supported this statement with a statistic that described how millennials will comprise 40 percent of the total voting population by the year 2020. “Our young women have the power to change this country” Davis said. “We’re going to see things change for the better” if and when young women seize the power of their voices.

Davis ended her message by again making a connection to her support of Clinton: “For young women to consider the power of their voices, Clinton is a great role model to watch.”

It was made clear throughout the event that there is an abundance of opportunities for college-aged women to get involved in the political process.

“People of all ages can even get involved and get engaged” Aguilar said.  Davis also mentioned a project she recently created called “Deeds Not Words.”  This project aims to help action-oriented young women get involved in concrete ways in a new era of equality.