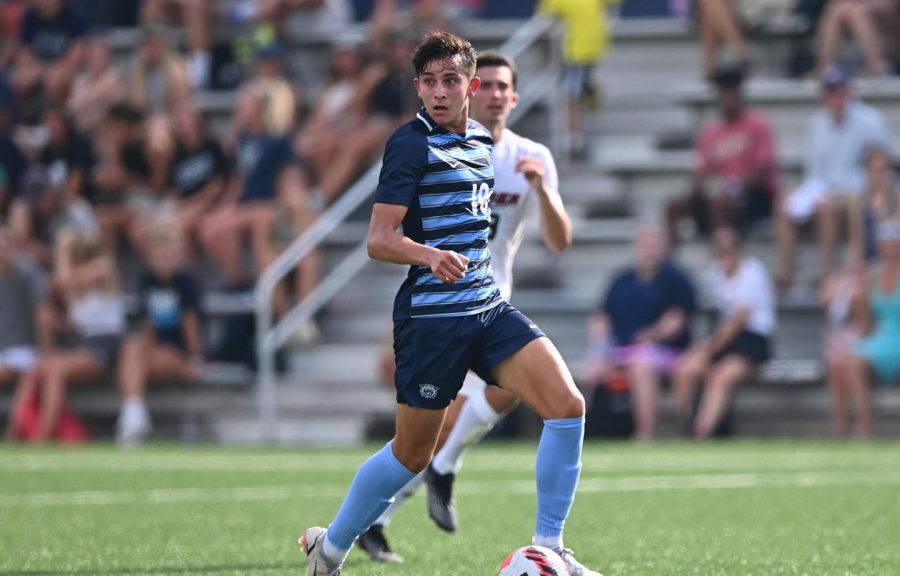 Villanova men’s soccer picked up a win in its first Big East game of the season on Saturday, beating Marquette, 1-0, with the only goal of the match coming off the foot of freshman forward Balthi Saunders in the 28th minute. The win takes the team to 5-1 on the season and marks its third consecutive win.

Neither team was eager to attack from the outset, with both squads settling into their defensive shapes.

“It became obvious that this was a game where we needed to keep our defensive shape and that our back line and D-mids were really going to have to hold the middle for us,” head coach Tom Carlin said to Villanova Athletics.

Although it was Marquette that generated the most chances through the first 20 minutes, the Wildcats began to find their footing shortly thereafter. In the 25th minute, junior midfielder Gray Ricca sent a ball to junior forward Lyam MacKinnon, who ripped a shot that clanged off the right goalpost. While nothing came of that chance, it was indicative of what was to come for the Wildcats.

Shortly after, Saunders made a run in from the right side of the field, taking on multiple defenders before cutting in towards goal and sending a left-footed shot past the Golden Eagles keeper to give the Wildcats a 1-0 lead.

Saunders, whom Carlin called a “goal-scoring machine,” picked up Big East Freshman of the Week honors last week after scoring a crucial goal that brought the ‘Cats level against Temple. The strike against the Golden Eagles is Saunders’s third goal in as many games.

Villanova maintained that lead for the rest of the match, with the ‘Cats keeper senior Carson Williams making six saves throughout the night. The Wildcats’ back line only allowed the Golden Eagles to get off 12 shots in the duration of the match.

At the half, the Wildcats held a distinct advantage in chances created, as reflected in the shots, which were 10-4 in favor of the ‘Cats.

The Golden Eagles did not declare the game a lost cause, as they had a handful of dangerous opportunities throughout the second half of play. Williams was forced into action in the 59th minute to push away a Marquette shot that seemed destined for the back of the net, leaping to keep the advantage for the ‘Cats.

Arguably, Williams’ most impressive save came in the 82nd minute, as a Golden Eagle sent a shot to the right of Williams that changed direction after deflecting off of another player. Williams was still able to get a hand to the dangerous shot to maintain the back line’s clean sheet.

“This was one of those games where we needed Carson to make big saves,” Carlin said to Villanova Athletics. “And he made a few of them for us.”

The Wildcats will resume Big East play on Sep. 25 against Butler. The Bulldogs enter the match with a 2-3-1 record, including 1-0 in Big East play, after a win against UConn at home.

“Any time you win on the road in the Big East, it’s an accomplishment,” Carlin said to Villanova Athletics. “These teams are so tough, especially at home. I’m really proud of our resolve.”