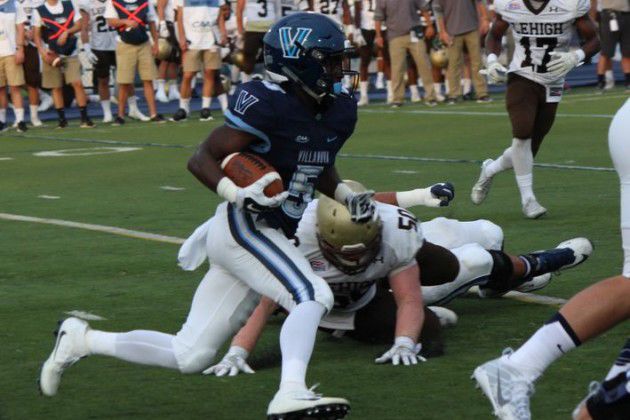 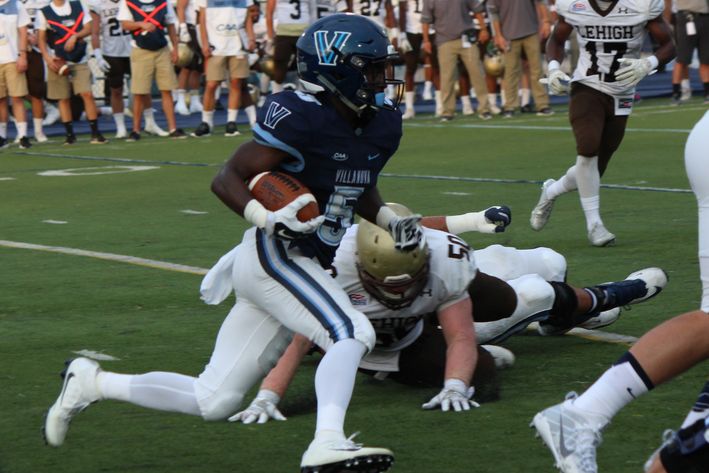 In a wild, back and forth home opener, Villanova defeated Lehigh, 26-21. Behind a strong running game led by RB Javon White and QB Zach Bednarczyk, the Cats kept the Mountain Hawks’ defense off balance and came away with the victory.

The Wildcats were able to rebound from a disappointing 28-7 loss to Pitt and looked like a completely different team in the process.

In a key moment during the final quarter, head coach Andy Talley gambled on a 4th and 1 situation while trailing 21-20, choosing to keep his offense on the field instead of turning it over to the field goal unit. White made his head coach look like a genius by taking a handoff for a 1-yard TD to put the Wildcats ahead for good, evening their record at 1-1.

It was a back-and-forth affair as the Wildcats took the early 6-0 lead after White’s first TD, capping a strong 80 yard march down the field. The Mountain Hawks (0-2) quickly rebounded, with RB Dom Bragalone and QB Nick Shafnisky rushing for touchdowns. Shafnisky had himself a day through the air, throwing for 246 yards while completing 29 of 41 passes. WR Troy Pelletier was the main beneficiary on the receiving end, with 13 receptions and 121 yards receiving.

There seemed to be a different Wildcat team on the field in the second half, as Villanova stormed back to take the lead with 14 unanswered points via an Aaron Forbes 20 yard score and a 1-yard TD run for QB Adeyemi DaSilva.

“We just found the holes in our coverage [at halftime],” linebacker Austin Calitro told VUhoops.com. “We just had some weak spots in our coverage, but we buckled down, and knew what they were doing ahead of time.”

Lehigh responded quickly with Shafnisky and Pelletier leading the team down the field with a 75-yard drive, capped by an 11-yard TD pass to WR Derek Nott for a 21-20 lead.

The Wildcats and Andy Talley bent but did not break as the offense came back to take the lead on White’s second TD. Lehigh had a chance in the final moments, but the defense stepped up, highlighted by a 14-yard tackle for loss by linebacker Jeff Steeb.

It was a bounce back game for the Wildcats. The offense gained over 390 yards on the ground, with Bednarczyk accounting for 100 of them (his third career 100 yard rushing performance).

White rushed for 155 and added 2 TDs, while Aaron Forbes pitched in for 87 yards of his own with a touchdown. The two-headed rushing attack of White and Forbes will be dynamic for the Cats this season.

The offense struggled through the air, as Bednarczyk only managed 56 yards passing. The dominant running game more than made up for the struggles of the pass.

The ‘Cats also finished +1 in the turnover margin, as Raashan Stewart came up with a big interception during a long Lehigh drive. Villanova finished the game without committing a turnover.

While the Wildcats should be more than pleased with their performance, there is still room for improvement.

The team was flagged eight times for 75 yards, with two holding penalties in particular negating what would have been big gains for the offense. In addition, third down conversions were difficult to come by for the Cats, as they were only 2 of 10 on third down. The field goal and extra point units also struggled mightily—two extra points were missed and a field goal was blocked.

All in all, it was a great win for the Wildcats, who were able to get their first win under their belt and gain confidence going into conference matchups.

More notably, the Lehigh win marks Talley’s 250th win of his career. He becomes one of five coaches in NCAA history to acquire more than 200 wins at one school.

“I’ve really been blessed to stay at this school long enough with an administration and a group of athletes over time that could help you accumulate 250 victories,” Talley told VUhoops.com. “It’s a nice round figure, and it kind of goes along with my last year here.”