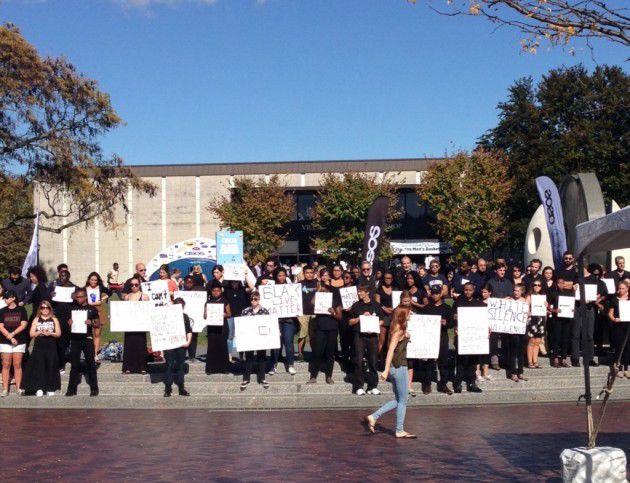 Earlier today a group of protesters took to the Oreo to support the Black Lives Matter movement and raise awareness about issues of equality on campus.  Dozens of minority and white students came out to the protest along with a few professors and administrators.  The protest was prompted by numerous instances of police violence and racial inequality in America.  Additionally, according to protest organizer Brendan Carchidi, the arming of public safety exacerbated concerns about equality on campus and motivated students make their voices heard.

“I just think it’s a really important issue,” one protester said. “Having these people come and actually stand up for what they believe in is critical in today’s age.”

The protesters published a list of demands to the University’s administration, entitled “What Steps Should We Take So Black Lives Matter on Our Campus,” including; “update the Café Nova mural to reflect diversity, acknowledge that the Core Curriculum is a Eurocentric, white, Western dominated perspective, demand more diversity in the Core Curriculum content, release the minutes from the public safety oversight committee so we have more transparency for the Villanova community, Improvement of the diversity of the President’s cabinet and the University Board of Directors.”

In an email sent to Rev. Father Peter Donohue O.S.A. Ph.D., University deans and faculty members, protestors detailed their demands, saying, “We view our universities [sic] idleness as dangerous to the community as a whole, but especially to those people of color on Villanova’s campus who are trying to make this place their home.”

“Furthermore, as Villanova professes the importance of community, there is a failure to recognize the past and present vulnerability of some members of the Villanova community, particularly Black and Brown bodies,” the email continued.

The University has yet to offer an official response.