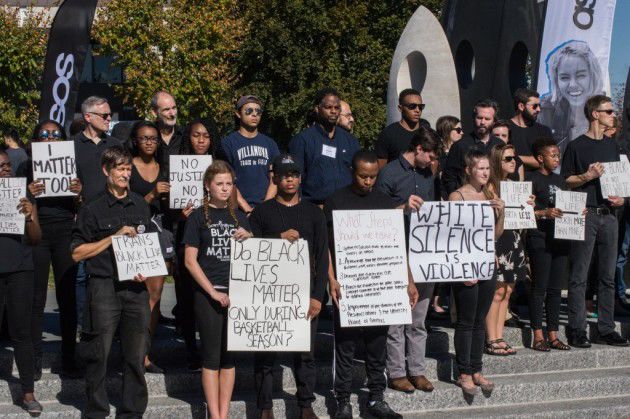 At 1:30 p.m. on Friday, Oct. 21, a group of protesters took to the Oreo to support the “Black Lives Matter” movement and raise awareness about issues of equality on Campus.  Dozens of students, professors and administrators joined the group carrying signs painted with slogans like “White silence is violence” and “If all lives matter why are black ones taken?”

Protestors each spoke on their reason for attending the protest. In addition to awareness, students cited family, equality, solidarity and justice as their motivation. The protestors spent much of their time in silence and stood in a wall with locked arms as a statement of unity.

The names of unarmed individuals recently killed by police officers were read, protestors shouting “Black Lives Matter” after every name. Protestors then lied on the ground in scheduled “die offs” meant to simulate deaths from police violence.

The protest, organized by the Association for Change and Transformation, began with the reading of an open letter sent to Rev. Father Peter Donohue O.S.A., Ph.D., University deans and faculty members that read, “We view our universities [sic] idleness as dangerous to the community as a whole, but especially to those people of color on Villanova’s campus who are trying to make this place their home.”

The correspondence also detailed a list of demands entitled “What Steps Should We Take So Black Lives Matter on Our Campus,” consisting of the following provisions: “update the Café Nova mural to reflect diversity, acknowledge that the Core Curriculum is a Eurocentric, white, Western-dominated perspective, demand more diversity in the Core Curriculum content, release the minutes from the public safety oversight committee so we have more transparency for the Villanova community, improvement of the diversity of the President’s cabinet and the University Board of Directors.”

“Furthermore, as Villanova professes the importance of community, there is a failure to recognize the past and present vulnerability of some members of the Villanova community, particularly Black and Brown bodies,” the email continued.

Dr. Teresa Nance, Associate Vice Provost for Diversity and Inclusion and Chief Diversity Officer, said the protest made her proud. “I am proud of the way that the students organized themselves,” Nance said. “I am proud at the thoughtfulness of their approach.  I am proud of the outreach, the engagement that they sought to achieve in planning and executing the event.”

“You test the fabric of a community when you dare to disagree and I happen to believe that the fabric of this community is tough enough to not only endure our disagreement but to welcome it,” Nance continued.

“So far, Father Peter and several Deans have reached out to us,” Nahya Bullock, a protest organizer, said. “We plan on discussing both our letter and our list of demands with them as well. Moving forward, ACT is putting together a response discussion for the protest where students will be able to express their feelings and concerns about the protest.”

“Moving forward, we hope to continue to gather students from all different walks of life to stand in solidarity with one another,” Simran Kripalani, another organizer, said. “ACT will be hosting a variety of upcoming events that will continue to tackle issues plaguing our campus and our country.”