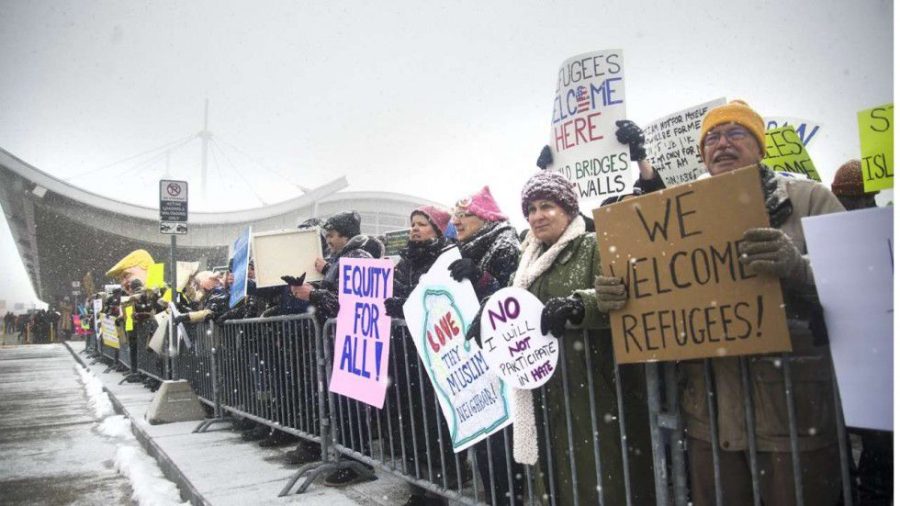 Trump’s Executive Order bans citizens of the Muslim-majority nations of Iraq, Syria, Iran, Libya, Somalia, Sudan, and Yemen from entering the United States for 90 days, all refugees for 120 days and Syrian refugees indefinitely. The Trump administration explained that these seven countries were selected because they were first considered “countries of concern” by the Obama administration, which imposed travel restrictions on these nations. Countries such as Saudi Arabia, UAE, Egypt and Lebanon, whose citizens were members of 9/11 terrorist attacks, are not included in this travel ban.

“When a friend told me at 8:30 that Sunday morning that he was planning on going to the airport protest, I had no idea what he was talking about,” Yoon said. “I had heard something about Trump’s executive order being protested at the JFK airport. . . but I didn’t know much more about what had happened. My decision to go was prompted by a strong conviction in the fundamental principles that I believe make America who she is—principles that I felt, deliberately or not, were being undermined by a President who either seemed to be intoxicated by the power of the oval office or hell-bent on making a point.”

In a recent message to the Villanova community, University President Rev. Peter M. Donohue, O.S.A., Ph.D wrote “at the Association of Catholic Colleges and Universities (ACCU) meeting in Washington, D.C., along with approximately 200 leaders from Catholic institutions of higher education across the country, I signed a statement with regard to the Executive Order.”  The ACCU website states: “as the voice of Catholic higher education, the Association of Catholic Colleges and Universities expresses its strong opposition to the Executive Order signed by President Donald J. Trump concerning U.S. immigration policy. We stand in solidarity with other Catholic and higher education organizations that recognize the moral obligation of our country to assist migrants, particularly those who are fleeing any kind of persecution.”

“There needs to be a balance between welcoming people in immediate need as members of one human family, and respecting our nation which has a particular role to play in providing for us,” Jeremy Puntel’19, another Villanova student present at the protest, said. “The hasty, inflammatory, and scary Executive Order fails at striking any balance. That said, looking back, I’m not sure if protesting helps either. I’m glad I registered my disapproval.”

Although for Yoon, protesting was a spur of the moment decision, she returned to campus hopeful, saying, that among those at the rally, “the unifying belief in why we love (or loved) America was one of the most heartening and inspiring takeaways that I will hold close when it feels like America is becoming cold.”