Carli Lloyd visits the University and addresses students on leadership 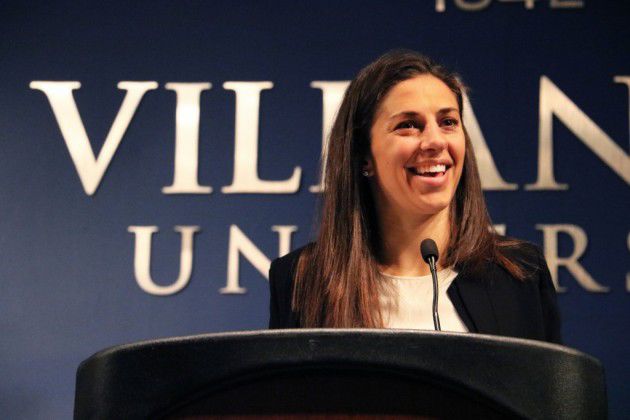 The Villanova Room was filled with soccer fans of all ages. The front rows were reserved for the current Women’s soccer team but the rest of the room was packed with students and young aspiring soccer stars alike.

Devon Jackson, Assistant Director of Leadership Programs, introduced the speeches by describing the many aspects of a leader. Then, Callie Duliba ‘16, co-President of the Student-Athlete Advisory committee and last year’s captain of the women’s soccer team, introduced the main speaker. Deliva mentioned several of Lloyd’s many accomplishments in her impressive soccer career, such as being named the 2015 and 2016 FIFA player of the year award.

Lloyd began by admitting she never imagined she would become a leader.         “When I started playing soccer I never envisioned myself necessarily as a leader, never thought to myself I would ever be a captain of the US Women’s National Team.”

“There are leadership qualities that if you instill in yourself on a daily basis, every single day, you automatically become a great leader,” Lloyd said.

She emphasized seven different qualities that she believes make a great leader.

“When I first got on the national team I wasn’t a hundred percenter,” Lloyd said. “I didn’t really know I needed to work hard all the time,. It’s not the effort you put in on the field when the cameras are on you it’s the effort that you give in training and holidays when no one is watching.”

The big motivator in Lloyd’s life is being accountable both on and off the field. This is seen even in the title of her autobiography “When Nobody was Watching”. This theme of “never switching off” continued to arise throughout her speech.

Lloyd later explained how she went about motivating teammates.

“People think motivating your team is just on the field” Lloyd said. “but in fact it’s off the field also.”

She described that her beginning days on the national team were tough because it was not a welcoming environment.

Several students seized the opportunity to ask Lloyd a question. Questions ranged from how to combat the gender and access inequality in soccer to how she felt after scoring the historic hat trick in the 2015 FIFA finals.

One 14 year old in the audience asked “What can I do to advance my career in soccer?” and Lloyd once again returned to her main theme and responded, “It’s a journey. . .you just have to put your head down and work every single day. There’s really no other formula.”

The event culminated with the current women’s soccer team giving Lloyd her very own Villanova jersey with her number 10.

“It was amazing” Duliba said. “I don’t know how she does it, for 10 plus years of playing professional women’s soccer and having such a professionalism on and off the field. It’s so great to have her here, not just for our women’s soccer team but for everyone in general since leadership extends far beyond sports teams.”