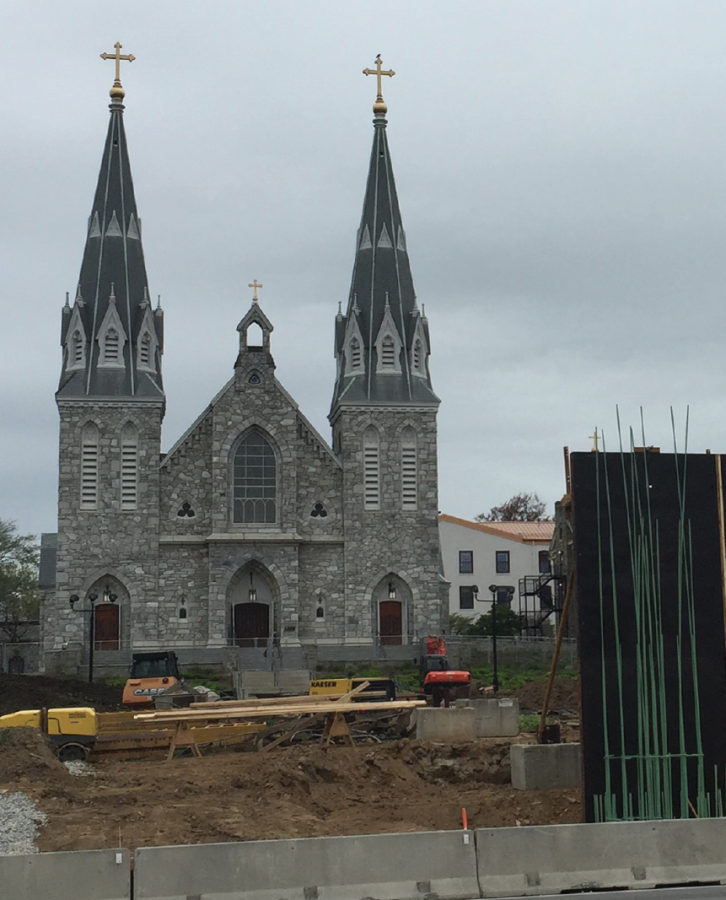 Contractors broke ground on the pedestrian bridge at Villanova in late March, a project that requires the walkway in front of the St. Thomas of Villanova Church be walled off, and several trees removed from the lawn. Students, many of them graduating seniors, have voiced disappointment that the Church can no longer be the backdrop of graduation day photos in May.

“The path leading up to the church has always been one of my favorite parts of campus,” Marion Ahearne, a senior Communication major, said. “It was my first impression of Villanova when I visited and I had always imagined taking pictures in front of the church with friends and family on graduation day, coming full circle. I think the walking bridge is a great idea and will look nice when it’s done but I wish they had waited to tear up the trees until after graduation, or at least not until after the flowers had bloomed.”

Ahearne was not the only graduate hoping to pose on the church steps in her cap and gown. In an informal Facebook poll posted in the University-created Senior Class Group, more than 160 students reported that they had been planning to make photos by the church a part of their final moments on campus. Three voters reported that they would be unaffected, and seven voters chose a third option, “If it helps the bridge to be built faster and other construction projects to remain on track, I’m okay with it.”

“As a civil engineering major, I understand the importance of a construction schedule and the very prevalent fact that time is money,” senior Rachel Albanese said. “However I also understand the importance of taking community wants, needs and input into account. Villanova was not thinking about senior students or its community when they made the decision to start construction. Instead they were trying to keep a project schedule on track for the pedestrian walkway which, in my opinion, there is no immediate need for.”

According to Robert Morro, University Vice President for Facilities Management, moving forward with the bridge is imperative to the timelines of other construction projects, especially the new dormitories.

“All the projects are interrelated,” Morro told representatives of various University departments at a briefing on April 20. “If you speak to any of the brides getting married this spring they would rather we were doing the bridge at a different time too and not out in front of the church in their way. There’s just never a good time. If it takes a year we’re going to hit a graduation cycle one way or another.”

The Lancaster Avenue dormitories will be a combination of single-dwelling and apartment-style housing for upperclassmen. Retail space below the apartments will include two fitness centers, a mailroom, a restaurant, a market and apparel shop and a technology space similar to Falvey Memorial Library’s Idea Accelerator.

“We need to get the dorms opened in the summer of 2019 because students will make plans of where they’re going to live, rent off campus or not,” Morro said, adding that the timeline of the pedestrian bridge “is tied to that.”

Facilities is also working in collaboration with SEPTA on the building of a new tunnel between Mendel Hall and West Campus, which will reportedly be larger, entirely handicap accessible, and secured by security cameras.

“There will be five cameras that are connected to our Public Safety system,” Morro said. “The current tunnel is about six feet wide, the new one is 15 feet wide. Today, it’s kind of dark and dingy and just seems a scary place. It’ll be well lit, bright,  airier and more accessible. You can even go through there on a bike in the future.”

One of the two West Campus turf fields will be covered with a seasonal dome, which will go up around Thanksgiving and be taken down each year in April. Varsity, club and intramural sports, in addition to Cheerleading, ROTC and other groups that previously utilized the pavilion for practice and competition will use this space during the winter months. Measuring approximately 370 feet by 220 feet and 65 feet tall, the dome will include a temporary track but will not host spectator events.

The Pavilion remodel will begin after graduation and be finished by October 2018. The men’s basketball team will play all home games off campus during the upcoming season. As for seats in the new facility, the design aims to maintain the same number. Expansion of the East and West sides to allow for more room between seats will be compensated by additional seats in the corners, according to Morro, and part of the student section will be a platform for standing room only, as most students stand during play.

Landscape transformations are being introduced to campus in phases. The first three have included the Bartley patio, the Riley Elipse plaza and the Grotto. Phase four, taking place this summer and next, will include a circle of paving stones around Mendel Field and three new plazas located in front of John Barry Hall, the Monastery, and Old Falvey.

“If you’ve been up through the quad and up to the area between Vasey and Connelly, it used to be a nasty place to walk through, kind of ugly ramps and stairs and no one ever hung out there,” Morro said. “Now we reconfigured that. There are tables and chairs, students can spill out of Connelly, spill out of Vasey, sit on the steps, move the furniture around. We created an outdoor living space that was never there before. So the same thing we’re hoping to do with this end of campus.”