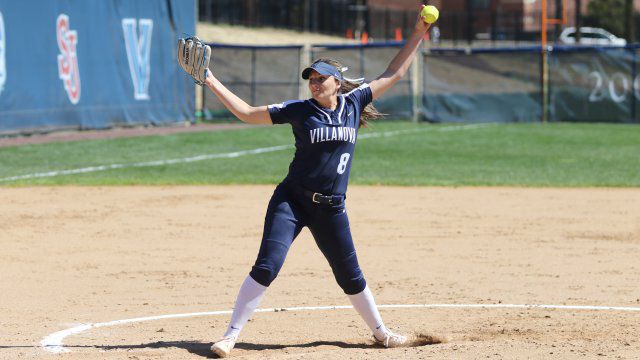 Lawrence (W, 21-7) struck out four batters and did not allow a base runner through all six innings, causing the game to end through mercy rule.

“As the game went on I knew I was throwing a perfect game, but we all kept it to ourselves until it actually happened,” Lawrence said. “I just kept telling myself to take it one pitch at a time and go after every batter.”

The senior is now the third softball player to throw a perfect game, joining Shannon Williams (April 8, 2004) and Theresa Hornick (March 7, 2001). She now has five complete-game shutouts this season and 10 in her career, lowering her BIG EAST-leading ERA to 2.34. This week, Lawrence went 5-0 pitching in three complete games, including two complete-game shutouts, all with a 0.76 ERA.

This accomplishment brought her the title of Louisville Slugger NFCA National Pitcher of the Week as well as her second title as BIG EAST Pitcher of the Week. Lawrence struck out 21 batters, allowed just three walks and held opponents to a .194 batting average.

“This is something I never would have imagined being awarded in my career,” Lawrence said. “It is such an honor and having these accolades proves how strong our team is and that all of the work we have put in this season is showing. With it being my final season of softball, I try to remind myself to not hold anything back and make the most of my opportunities.”

A grand slam by senior Natalia Segovia over the centerfield wall propelled the Wildcats ahead 4-0 in the top of the third inning. Lauren Herschberg, Brittany Husk and Nikki Alden on base before Segovia’s first career grand slam, becoming the 13th in Villanova softball history to do so.

“Nat’s grandslam was huge!” Lawrence said. “St. John’s is the best team in the conference and it is always a battle playing against them, so her home run really put us in control to win. She has come up in some key situations all season and I think it just shows how much work she has put in this season especially coming off of her ACL injury.”

In the top of the sixth inning, further efforts by Segovia extended the Wildcat lead to 8-0. With bases loaded, a Segovia fly ball was dropped by the St. John’s center fielder, sending three runners home.

Lawrence closed the game out with three quick outs in the bottom of the sixth, including a strikeout in the final St. John’s at-bat.

“After the game coach gave me the ball from the last pitch,” Lawrence said. “This is something I will forever cherish.”