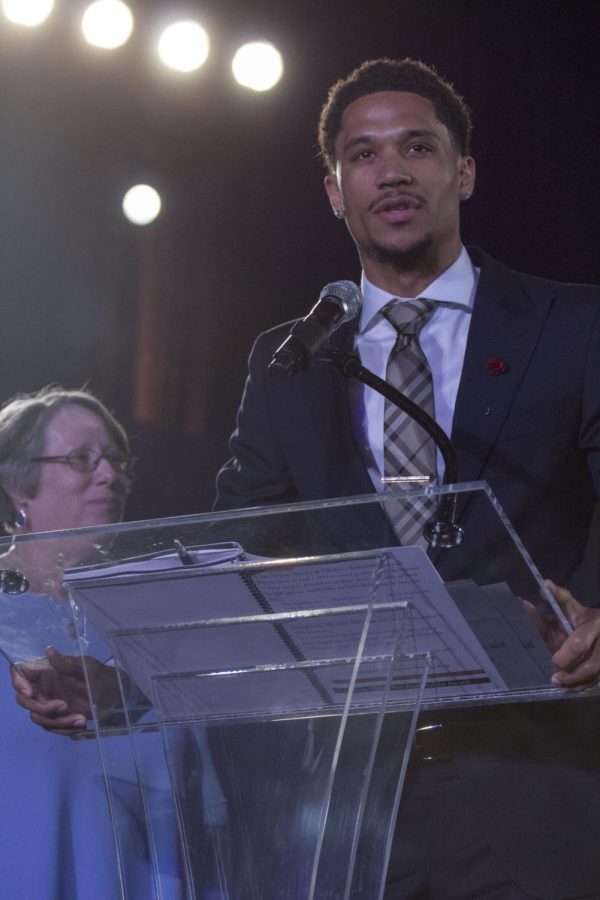 Due to his individual efforts in this year’s 32-4 season, red-shirt freshman guard Donte DiVincenzo received the Paul Arizon award, given to the team’s most improved player. After the loss of junior guard Phil Booth, DiVincenzo was able to blossom as a integral contributor for the Wildcats this season. In his first full season, DiVincenzo averaged 8.8 points, 3.8 rebounds and 1.7 assists per game and had three 19+ point performances against St. John’s, the game-winning basket against UVA in front of a sold out Wells Fargo Center and a 21 point-13 rebound performance against Mt. Saint Mary’s in the first round of the NCAA Tournament. The man called “The Michael Jordan of Delaware” by Head Coach Jay Wright also earned Big 5 rookie of the year.

Point guard Jalen Brunson, who announced he will be returning for his junior season next year, shared the Most Outstanding Player award with senior Josh Hart. Brunson, who was also a finalist for the Bob Cousy Award (given to the nation’s best point guard), was able to mature as a leader on this year’s team and impact it in a major way. After a year of being the understudy to Ryan Arcidacano, Brunson averaged 14.7 points, 2.6 rebounds and 4.1 assists per game this season. Highlighted by a 23-point performance on the road against (then) number 10 Creighton and a 21-point performance at Providence, Brunson became one of the Wildcats’ most consistent players this year, earning First Team All-BIG EAST selection as well.

Red-shirt sophomore forward Eric Paschall received the Alexander Severance Award, given to the player who showed hard work on the court and in the classroom. In his first season as a Wildcat, the transfer from Fordham averaged 7.2 points, 3.8 rebounds and 21.7 minutes per game off the bench highlighted by a 17-point performance against Western Michigan in the Gildan Charleston Classic. Due to the lack of depth the Wildcats had this season, Paschall’s versatility was a major factor in Wright’s seven man rotation this year as he was able to defend against multiple positions this season from Wisconsin 6’3“guard Bronson Koenig to the tall towers of Purdue with 7’2” Isaac Haas and 6’10” Caleb Swanigan.

The evening’s main focus was to celebrate the farewell of the winningest class in Villanova basketball history: seniors Josh Hart, Kris Jenkins and Darryl Reynolds. In addition to the four straight regular season and two tournament championships in the BIG EAST, these three players accumulated a record of 129-12 (the most wins by any class in Villanova history), a 16-0 undefeated record in Big 5 play (the first class in city series history to go unbeaten over four seasons), the most wins in Big East conference history (71), highest winning percentage in Big East history (.886), a 46-1 record at the Pavilion and last year’s National Championship.

This year was a special one for Hart alone. The 6’6” guard from earned numerous awards and honors, including Big 5 and BIG EAST Player of the Year, First Team All-American, the Julius Erving Award as the nation’s best small forward, Villanova’s most outstanding player award and the Villanova Basketball Award given to the player who best represents the values of Villanova basketball. For a player who had the option to leave last year for the NBA Draft, he decided to finish his collegiate career to improve his game and all his accolades show it. Hart credits to Assistant Coach Baker Dunleavy, who is becoming the new Head Coach at Quinnipiac next season.

“My decision last year was 70-80 percent my family and 20-30 percent based on Baker leaving us,” Hart said. “So, thanks Bake for not leaving us last year and sticking one more year with me.”

Hart had a special thank you to his parents too.

“These two people have been my backbone,” Hart said. “Everyone asks me how I just go after every ball with a reckless abandonment, or how I don’t care about getting hurt, it’s because of these two people.”

Jenkins, who scored 1,383 points in his four-year career, was appreciative of the opportunity that he had in his four years on the Main Line. While he is best known for making the electrifying buzzer-beater to win the national championship last year, the way he carried himself this season was even more impressive. Wright pointed out that Jenkins was very humble and unselfish, wanting to continue to get better rather than acting arrogant around his teammates because he made “the shot.”

“To a lot of people, I am known as the guy who hit the shot, but I’ve been striving to be so much more than that,” Jenkins said. “Let’s all remember the reasons why we are sitting here. We choose Villanova because, along with competing at the next level, we take advantage of our class sizes and ability to take advantage of all Philadelphia has to offer. But more importantly, we choose Villanova because of the people, the community. We love the game because it takes all the team members to win at all costs. It isn’t about who scores the most points, gets the most rebounds or even scores the game-winning basket.”

The recipient of the Attitude award given to the player whose play has gone unnoticed was Reynolds. The 6’9” Philadelphia native had a long road to get to where he is today. He was a late bloomer who first started playing basketball at 16. Throughout his 10-minute speech, the longest of the three seniors, Reynolds told the audience about his journey consisting of the highest of highs and the lowest of lows. At the end of each paragraph he ended with the phrase “that’s life.”

“I think I’ve said ‘that’s life’ to myself just as much as we say ‘attitude’ in this program,” Reynolds said. “For a long time, saying ‘that’s life’ was a way to keep moving forward.”

At the end of his sophomore year, Reynolds admitted he wanted to transfer.

“I was so frustrated with the fact that I wasn’t playing”, Reynolds said. “But I understood. JVP [JayVaughn Pinkston] was a senior, Daniel [Ochefu] was molding into the leader that we needed us to lead and once again I had to take a backseat.”

After talking with Wright in the offseason of his sophomore year, he decided to stay.

“The one thing in my life I want to see through is this. So I stayed.” Reynolds said.

He changed his attitude and had a new approach to his junior season.

“I decided it was time to man up,” Reynolds said. “I remember sitting in the locker room after the Iowa win and looking around all the guys thinking to myself there’s this energy, this spirit that was around that team that everyone surrounded us. And I’m thinking we are going to win the whole thing. And at the end of the year we were supreme, and supreme things happen to supremely good guys.”

“No, we didn’t bring the National Title back down to Lancaster Ave, but to be honest, that’s not what this season was about.”