Jim Keady speaks out against Nike 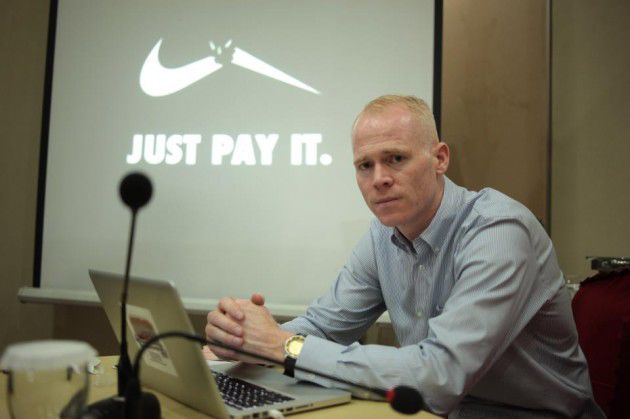 On March 29 Villanova University hosted Jim Keady, speaker for the Oscar Romero Solidarity Lecture.  Keady discussed Nike sweatshop labor, his personal experiences in Nike’s sweatshops, and his battles as an activist.  Keady had visited Villanova in December of 2011, but in light of Nike’s recent worker’s rights violations surrounding Villanova’s contracts with Nike, Keady’s challenged students to take action on campus and through their purchasing power.

Yvonne Nguyen, sophomore President of Villanovans Against Sweatshops (VAS), says, “Villanovans Against Sweatshops is committed to exposing the extremely unethical workplace conditions that Nike’s workers endure with our one demand: Nike must allow full, independent access for an independent monitoring agency, namely the Workers’ Rights Consortium (WRC), into all Nike factories.”

Keady opened his talk with a presentation of a short film, entitled Behind the Swoosh (available on YouTube), which documents his fight for Nike sweatshop workers since the 1980s.  Having played soccer on the collegiate and professional levels, and later a coach for the St. John’s University men’s soccer team, Keady understands completely the importance of sportswear endorsement contracts to universities, their teams, and their players. While coaching, Keady was studying Catholic theology at St. John’s and after doing research on Nike’s sweat-shop practices, he became unwilling to brand himself with Nike gear or promote Nike’s brand. This decision lost Keady his coaching job, but kick started his 30-year long battle against the sportswear giant.

Keady wanted to see firsthand the abuses experienced by Nike’s factory workers, so he traveled to Indonesia and for one month lived in the workers’ slums on a workers’ salary of 1.25 dollars per day—a wage far below the minimum and livable wages in the area. On this salary, Keady describes that he could afford to buy himself soap for bathing and two simple meals a day, as the factory provided his third meal—an often inedible, vermin infested lunch.  The shanty town where he lived was surrounded by a moat of sewage and populated with enormous rats.   Keady witnessed the beating of unionized workers by military guards, the public, bodily humiliation of women denied legal menstrual leave, unpaid overtimes and the overall impoverished conditions of the workers in his slum community.  Keady was also astonished by the mass expanses of land, often several football fields wide, that were filled with mountains of scrap materials and rubber dumped from nearby Nike factories.  Often the dumping areas are next to villages, fields where children play and farms.  Everyday, a portion of these trash mountains is burned, releasing toxins and carcinogens into the air.  In the rainy season, often these piles are washed away by heavy rains into watersheds.

Infuriated by what he saw, Keady made it his life’s mission to combat such injustices. On countless occasions, he was thwarted by Nike higher-ups and even denied personally by Nike’s former CEO, Phil Knight himself. Keady asked the Villanova audience who had heard that Nike “cleaned up their act” in the 1990s, and after many in the audience raised their hands, Keady proceeded to explain Nike’s history of publicizing false and inaccurate information about its environmental practices and worker treatment.  When Keady is accused of “picking on” Nike, the number one athletic apparel company in the world, which rakes in 30 billion dollars in revenue, he responds, “If this is a David verses Goliath fight, I can’t even afford the rocks I’m putting in my slingshot. I’m not picking on anyone.”

Since his fight began, Keady has seen progress.  Since Keady’s initiative spread and the press put more pressure on Nike, women no longer need to produce physical proof of menstruation for leave, physical intimidation of unions has ceased, overtime is no longer unpaid, and wages have been increased to the minimum wage at Nike’s Indonesian factories,. Keady is still waiting to see substantial progress regarding Nike’s scrap-dumping zones.  He would like to see more progress through increased wages.

Keady’s focus was first concentrated in Nike’s Indonesian factories with the hope of creating a paragon movement to combat sweat-shop abuses to then be applied to Nike factories in other countries, and eventually to sweat-shops of other companies.  Keady’s goal is to pressure Nike to pay its workers at least three times the legal minimum wage in Indonesia, to make the salary at least livable and give laborers the opportunity to accumulate a small savings, as many now drown in personal debt.  Regarding Nike’s most expensive shoe products, Jordans or Lebrons for example, Keady produced these figures:

If a Nike sweatshop worker wanted to buy a pair of Lebrons in Jakarta that he/she worked to produce, it would cost him/her two-thirds of his/her wages from that month.  Keady reported that the workers like their jobs and have tremendous pride in their craft, though many never get the hold a finished product.  One Indonesian confessed his dream to Keady: “Just once, I want to come home with a pair of Nike sneakers and give them to my daughter.”

After explaining this information to his Villanova audience, Keady must have read the faces in the crowd, asking if people felt overwhelmed by the issue, and in response received many head nods.  He then gave the Villanova community tips on how to support the movement against Nike’s sweatshops.

After talking with the Indonesian unions and receiving their approval, Keady explained that he now asks students to boycott Nike, athletes to cover their Nike logos with a patch or tape like Georgetown athletes.  Though all athletic apparel companies use sweat-shop labor to produce their products, Keady explained that Nike is the largest and subjects its workers to notoriously deplorable conditions by comparison.

Kathryn Getek-Soltis, Ph.D. Villanova professor and Director of the Center of Peace and Justice Education says, “one of the most important aspects of Keady’s presentation was that he challenged the audience to move beyond mere questions of conscience for the individual consumer.  If we are serious about confronting the injustice of sweatshop labor, we must commit ourselves to the power of creative, strategic action as coalitions and institutions.”

“This issue is relatively simple,” Robert Jantzen, Ph.D., said. “Nike is the only major sports apparel company which refuses to cooperate with the Workers’ Rights Consortium with which Villanova is affiliated, and is now in clear violation of Villanova’s stated code of conduct required of all its licensees. Yet during this whole year when Villanova had the nation’s attention as the NCAA champion, it refused to even try to nudge Nike in the right direction, totally at odds with our Veritas, Unitas, Caritas moral compass, thus squandering an important opportunity to back up these words with deeds. We have many things about Villanova to be proud of, but this relationship with Nike is not one of them.”

As a Catholic University, whose athletic programs are Nike endorsed, does Villanova have a moral obligation up uphold regardless of our contractual standing with the sportswear giant? That was the question that the listeners of the lecture left considering.