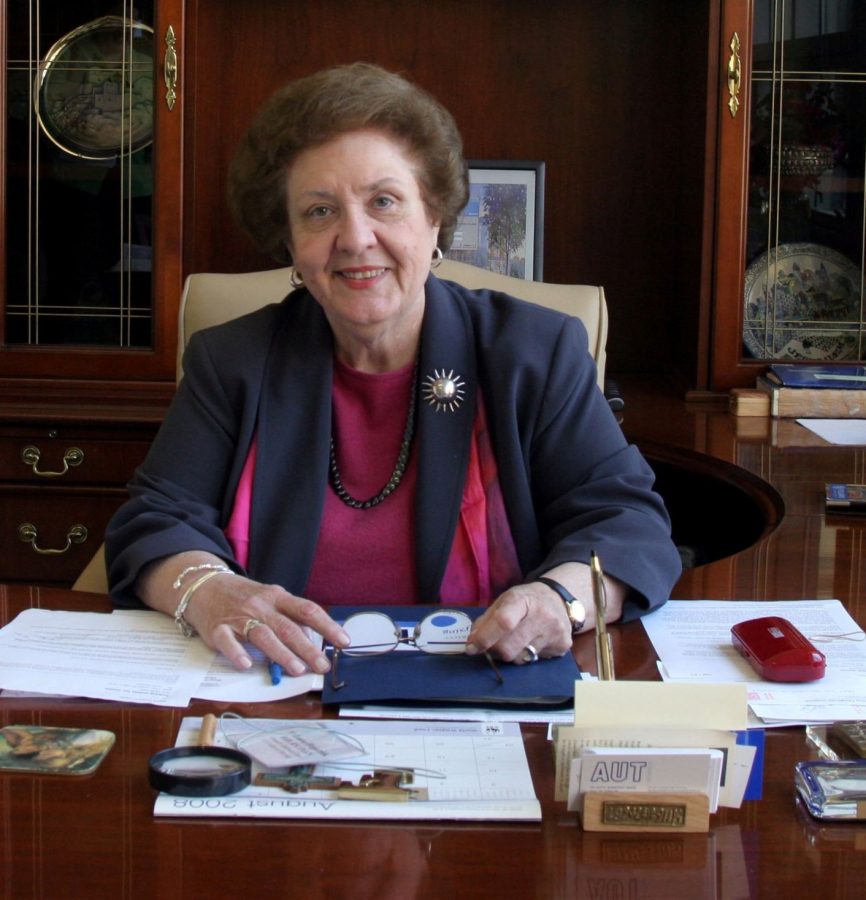 Louise Fitzpatrick, EdD, RN, FAAN, who served as the Connelly Endowed Dean of Villanova University’s College of Nursing since 1978, passed away peacefully last week following a nearly three-year battle with cancer. Fitzpatrick was instrumental in the College becoming one of the nation’s premier nursing programs.  “Students always came first to [Fitzpatrick], and she kept a good finger on the pulse of what was going on,” Lesley A. Perry, Ph.D., RN, Associate Dean and Professor at the College of Nursing, said.

“Louise Fitzpatrick embodied the spirit of what it means to be a Villanova nurse,” the Rev. Peter M. Donohue, OSA, Ph.D., said. “She was a visionary, whose leadership in creating the College of Nursing is unparalleled. Louise loved nursing, her college, her students, and everything Villanova. Her legacy will live on at Villanova, in the College of Nursing and in the hearts and minds of everyone she has impacted. The entire Villanova community extends its deepest sympathies to everyone affected by her loss.”

Fitzpatrick’s leadership was instrumental in transforming the College of Nursing into a top program.  The National League for Nursing has recognized The College of Nursing as a Center of Excellence in Nursing Education since the NLN began the distinguishing colleges in 2004.

Furthermore, she helped construct the master’s program, doctoral program and an accelerated BSN program designed for second-degree students.  When she first came to the University, the College of Nursing had one program: the BSN program for high school graduates. It was also under her time as Dean that three centers were launched within the College of Nursing: the Center for Nursing Research, the Center for Global Public Health and the MacDonald Center for Obesity Prevention and Education.

Fitzpatrick’s influence was not confined to campus, however. “Her desire was to make Villanova’s School of Nursing known nationally and internationally,” Perry said. Fitzpatrick succeeded in this endeavor—aspiring to help others both home and abroad by strengthening study abroad and health promotion experiences for her students to pursue across the globe. The College has welcomed—and continues to welcome—students from around the world.

Likewise, in accordance with the University’s Augustinian tradition, she accentuated multicultural experiences in underserved locations around the country.  To list a few, she organized programs in the Western Shoshone Native American reservation and the Delaplaine McDaniel Elementary School in Philadelphia.

As stated in a University press release:

“Fitzpatrick was involved in higher education accreditation since 1972, serving as an accreditation visitor for the Middle States Association, the NLN and the Commission on Collegiate Nursing Education. Active in community and professional affairs, she served as chair of the NLN’s Accreditation Committee and its Accreditation Appeal Panel, as well as president of the Pennsylvania Higher Education Nursing Schools Association. She was also a member of the External Advisory Committee, Rafic Hariri School of Nursing, at the American University of Beirut. Prior to becoming dean of Villanova’s College of Nursing, Dr. Fitzpatrick served as an associate professor in the Department of Nursing Education at Teachers College, Columbia University. In this capacity, she acted as major adviser for master’s degree students in curriculum development and community health nursing, directed doctoral study in nursing history and nursing education, and worked extensively with international students.”

Dr. Fitzpatrick will be greatly missed by the Villanova community, and her legacy will continue to guide the College of Nursing in the future to come.