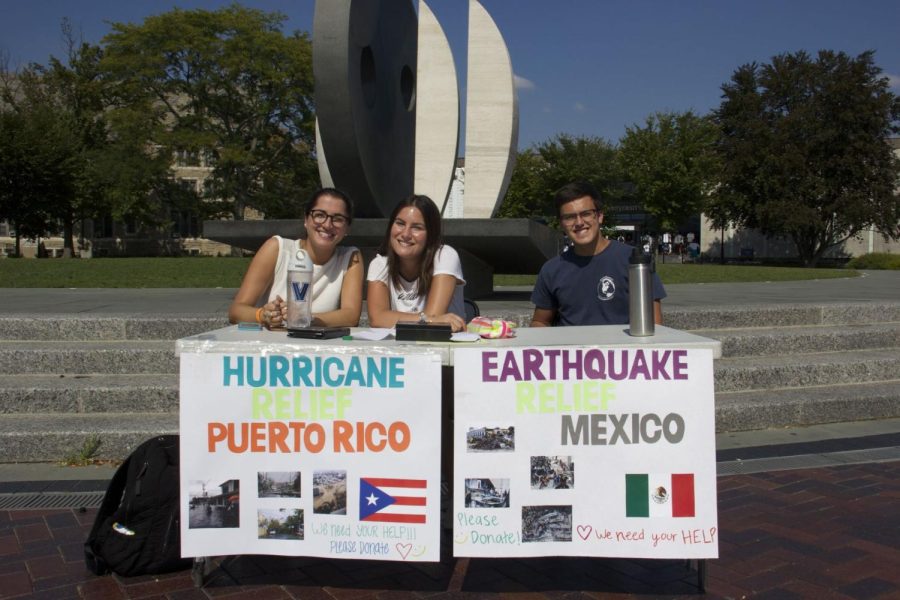 Without food, water, power and gas, Puerto Rico is in the middle of a humanitarian crisis. But Puerto Rican students from over 100 universities in mainland America are providing hope across the island.

The University’s Hispanic Society is working hard to promote Students With Puerto Rico, a trending GoFundMe page that has five thousand social media shares and is growing every minute. Donations can be made here: https://www.gofundme.com/studentswithpr.

“This initiative began with college students across the U.S. who anxiously witnessed the wrath of Maria from the outside and felt helpless,” Students With Puerto Rico stated. “We realized that through our networks at the different universities we attend, we can have a great impact on the recovery efforts.”

Penn student and San Juan native Jose Diego Toro kickstarted the fundraiser that has been active for five days and has raised over $100,000, including a $20,000 contribution from Jimmy Fallon.

“Today was a nightmare for Puerto Rico, but I know tomorrow everyone is going to get up early and start working hard on rebuilding,” Toro wrote on his Facebook page. “As college students in the United States, we cannot sit idly by: we want to help those that lost everything get their lives back in order.”

Senior Stephanie Algarín is one of many Puerto Ricans completing university on the mainland. “There hasn’t been a second the entire Puerto Rican community at Villanova wasn’t in contact with each other asking for updates on family members and affected areas,” she said.

Proceeds from the GoFundMe will go to Unidos por Puerto Rico, a public-private initiative started by the office of Puerto Rican First Lady Beatriz Isabel Roselló and other companies that can provide help to victims of the storm.

“I’m so inspired by what you guys are doing,” Fallon wrote. “Love and thoughts to Puerto Rico and everyone affected by Hurricane Maria.”

Algarín and roommate Isabel Consuegra are in despair over the destruction of their home and the fact that they can’t be there to help.

“This isn’t Katrina where people could just pack up and leave,” Algarín said. “People are stuck. The line to get food at the supermarket or fuel at the gas station is 10 to 15 hours long. This is without a doubt a humanitarian crisis like no other we have ever endured in history.”

As members of Hispanic Society, Algarín and Consuegra are relentlessly promoting the GoFundMe through sharing it with friends and the society set up a donation booth outside the Oreo.

“The pain hasn’t been easy to cope with,” Algarín said. “We are distraught, saddened, scared, lost.”

Consuegra has had minimal contact with her family this past week. Her parents wanted to send her younger brother to the states for safety, but he opted to stay and aid his people in disaster relief. Consuegra was touched by her brother’s bravery.

“My brother is no coward,” Consuegra said. “He is an inspiration, and I am proud of him for staying behind.”

Internet is down on the island, so Algarín just booked a flight to Florida for her father to bring supplies back for his community. Her fall break plans don’t include a relaxing vacation on the beach—no, she will be assisting her dad in Florida buying supplies at Home Depot and basic necessities at the supermarket, since 45 percent of the island doesn’t have drinking water.

“My Father, my hero, my inspiration, has been so hands on with hurricane relief,” Algarín said. “We merely want the people from my home to have what they need to be alive and healthy.”

Algarín’s dad submitted his resume to FEMA as a temporary disaster relief worker and has already saved animals from shelters with crumbling infrastructure.

“I’m not as concerned for my family as I am for the additional 3.5 million people on the island who are [worse off],”  Algarín said.

She fears that death and disease will plague the island from the lack of basic human necessities, medical care and stagnant water that floods the streets. A 7 p.m. curfew has also been put in place for safety purposes.

“It is a dangerous free-for-all out there and we need to make sure our people are safe,”  Algarín said. “There is little to no law enforcement and people have been getting threatened, held at gun point and robbed from the desperation.”

After Irma, the island breathed a sigh of relief. But Maria wreaked havoc.

Sophomore Francisco Biaggi called upon his club tennis team and now calls upon the greater University community to help as they can by making a simple donation, no matter how much.

“I beg of you—my home has been destroyed by this storm,” Biaggi said. “Keep our island in your prayers and be grateful of where we are right now and what we have. You never know when a storm might come and take it all.”