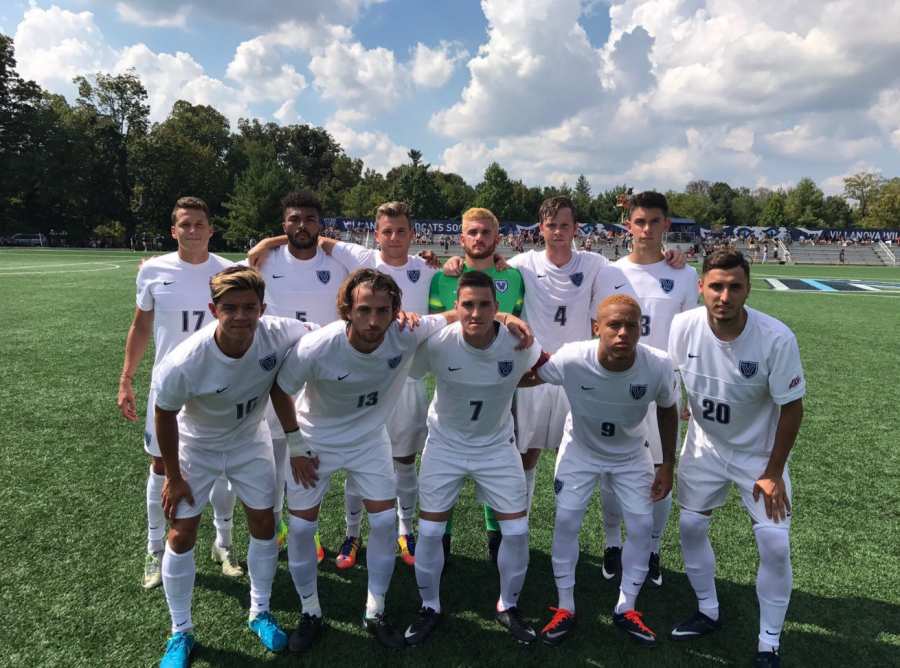 Players pose for a team photo before their game against Marquette on Sept. 16.

So far in the 2017 season, the Wildcats have an overall record of 5-4 (1-1 BIG EAST) having defeated Marquette 3-1 and suffering a bitter 2-0 loss to Creighton.

Although not off to the strongest of starts, the Wildcats have an impressive 4-1 record at the Higgins Soccer Complex.

Out of nine matches, the ‘Cats have gone into double overtime twice (against Virginia and Delaware), and frequently play very close games. The team does well under pressure and is calm, cool and collected in most situations, if not slightly sloppy in transition from offense to defense.

A possession-minded team, its style of play is focused around keeping possession of the ball, something easily achieved through the great amounts of speed Villanova has on its side.

Most of the Wildcats’ firepower comes from the midfield with these players scoring 15 of all 17 goals scored this season.

The Wildcats have a deep and experienced team, with many players who made the NCAA tournament in the 2016 season returning for another. Among those returning from last season are seniors Andreas Bartosinski and Lucas Hodges.

Hodges leads the team in goals scored, with four goals and one assist under his belt. Bartosinski trails Hodges’ record by one goal. Also returning is goalie and 2016 team captain, Will Steiner.

As captain in 2016, Steiner led the Wildcats to the NCAA semifinals against Butler. Making an impressive 90 saves for the 2016 season. So far, the goalie has had two clean sheets this season and has made 35 saves in the course of 9 games (approximately 3.88 saves per game).

Although the team may seem top heavy at first glance, the majority of those on the roster are young ones with much to learn.

Seventeen out of the 29 men on the roster are underclassmen—7 of them freshmen. Amid these freshmen are standouts Yusuf Cueceoglu and Theo Quartey.

Cueceoglu was an integral part of the offense in the game against UMBC (University of Maryland Baltimore County), scoring two goals and offering up one assist.

Both Cueceoglu and Quartey have previously been named BIG EAST Freshman of the week due to their performance on the field. Quartey leads the freshmen in scoring, with a record of three goals and two assists. Coincidentally, both Cuecoglu and Quartey play midfield positions.

Last year’s team of Wildcats made school history and became the first team to make the NCAA tournament.

This year’s team will have to step it up if it has any hopes of earning an NCAA bid. The team had an overall record of 10 wins and 8 losses last year, so this year’s team is right on track, with five wins and four losses. With a majority of underclassmen on the roster, the young team is bound to learn and grow as the season goes on.