Football looks to bounce back vs. Towson after tough loss in OT 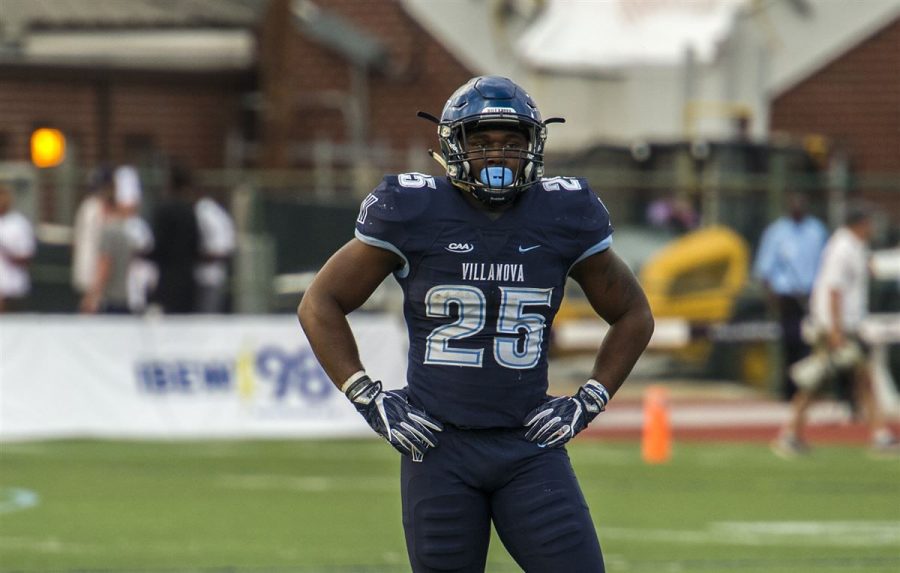 Aaron Forbes catches his breath during the University’s win over Lafayette.

The Wildcats recorded their first conference loss of the season after losing to Albany in overtime, 19-10, last Saturday after Zach Bednarczyk was tackled for a four yard loss on fourth and one on the Wildcat’s final possession.

While Bednarczyk was tackled, the ball came loose, and Albany scored a touchdown to win the game. The offense looked like they were going to score on the game’s first possession until tight end Ryan Bell was fumbled the ball, and gave the Great Danes the momentum early in the game.

Aaron Forbes and Matt Gudzak were unable to establish the ground game again, and rushed for 50 of the team’s total 61 rushing yards. Bednarczyk completed 23 of his 35 passes for 193 yards and a touchdown, but the Albany defense was able to sack him three times.

The Wildcat defense was able to keep itself in the game, only giving up a total of 95 yards and 13 points. For three quarters, Albany held a 3-0 lead after a made field goal in the second quarter.

At the start of the fourth quarter, Wildcat kicker Drew Kresge tied the score at three in the fourth after a nine play, 73 yard drive, that took almost five minutes.

After Albany scored a touchdown with two minutes left in the fourth quarter to extend their lead to 10-3, the Wildcats marched downfield, using a crucial 18-yard reception by Taurus Phillips on fourth and 12 to extend the drive, and ultimately scored their only touchdown of the game with a two yard shovel pass from Bednarczyk to Forbes as time expired.

While the team will drop in the CAA rankings, they will be focusing on their next opponent, Towson. The Tigers coming off a loss to Stony Brook and will be searching for their first CAA win next Saturday. After former Oregon transfer quarterback Logan Malach suffered an upper body injury against Maryland, the Tigers are led by red shirt freshman quarterback Ryan Stover. In high school, he led Upper Dublin to its first District 1 Quad A championship his senior year and passed for 5,008 yards and 50 touchdowns for his career.

In four games, he has completed 54.5 percent of his passes totaling 663 yards and two touchdowns. He likes to release the ball quickly in the pocket in order to draw opposing defenses off guard.

In its 25-17 loss to Stony Brook, Stover completed 15 of his 30 passes for 162 yards. He can also make plays with his legs, after leading the Tigers in rushing last week with 56 yards and is the Tigers’ leading rusher this season with a total of 158 yards on the ground.

In addition to the versatility of Stover, the Tigers like to establish the ground game, making up for the efforts of former running back Darius Victor last year. They are led by red shirt sophomore running back Shane Simpson. He has 108 yards on 30 carries this season and can impact a game with his kick-returning ability, as he was third team All Kick Returner last year and was named pre-season all-CAA Kick Returner this year.

The Wildcats should also keep an eye out for freshman receiver Ryan Dorsey, who had 140 all-purpose yards last week against Stony Brook, 77 yards receiving and 61 on kick return and two yards rushing.

Look for the Wildcats to try to establish the run against the Tigers. It allows Bednarczyk to get into a rhythm to throw the ball. In both of their wins, the Wildcats have averaged 264 yards on the ground, while in their losses, they have averaged 40.5 yards.

Ryan Bell and Taurus Phillips have combined for 561 yards and five of Bednarczyk’s six touchdown passes.

Kickoff at Johnny Unitas Stadium is at 6 p.m. this Saturday, Sept. 30.