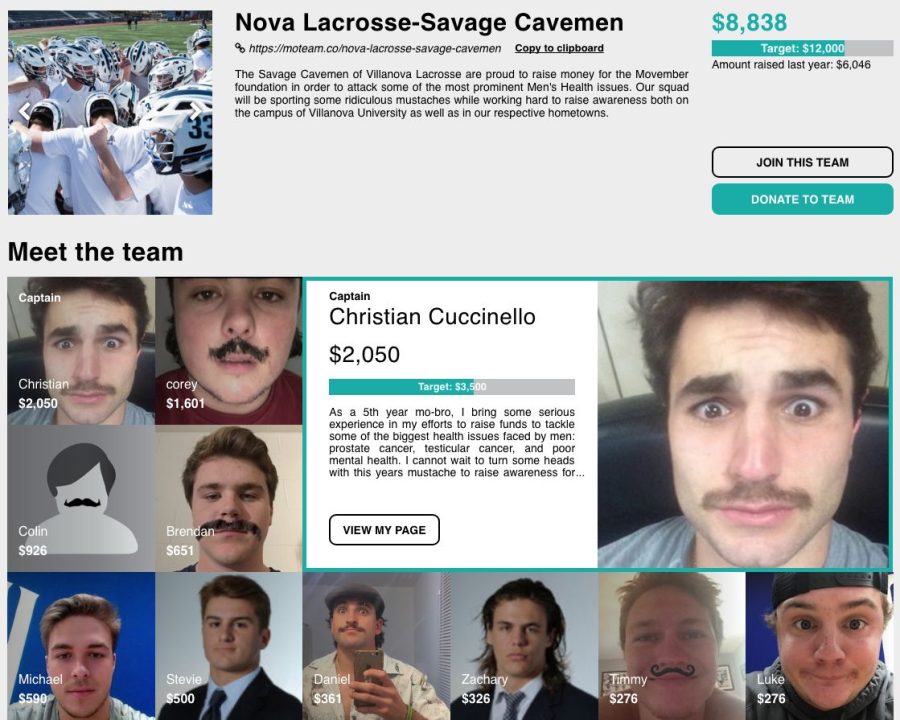 Courtesy of the Movember foundation

Men’s lacrosse has already raised over $8,000 for Movember in the first week of the month.

The month of November endorses growing a mustache for men’s health awareness, including prostate and testicular cancer in addition to suicide.

The MoVember foundation started in 1999 with a few men in an Australian bar, and today organizations across the globe participate, including the men’s lacrosse team. For the past four years, senior attackmen Christian Cuccinello and Daniel Seibel have led the charge to raise money for this cause.

“It’s always a fun thing to rock your mustache around campus and see the looks [we] get,” Cuccinello said. “It’s an easy conversation starter and an easy way to raise awareness for a cause that not many people have a great knowledge of.”

Seibel became aware of the fundraiser when he met Cuccinello his freshman year.

“When I got to Villanova and met Christian, he came and brought the idea to the team, got the ball rolling, got the team on board with the mustaches and I loved it,” Seibel said. ”I’ve kind of have been his wingman though this and all of his efforts.”

What started out as a small group with Cucinello and Seibel in Stanford Hall has now spread throughout the whole lacrosse team.

“It started out small, but the more we were able to raise awareness and people realized how much fun we were having with it, it brought us closer as a unit and  ultimately led to every single member of the team on board,” Cucinello said.

“It’s really awesome to see how far this has come since freshman year,” Seibel added. “Christian has done a great job of getting organized with Movember and getting the team together. We call ourselves the ‘Villanova Lacrosse Savage Cavemen.’”

These Savage Cavemen have raised over $8,000 so far this year within the first week of November. That is $2,000 more than they raised last year at the end of the month. Cuccinello alone has raised more than $2,000.

“It means the world to me to be able to lend a hand,” Cuccinello said. “Prior to my experience at Movember I had no idea about how prominent these issues are globally. Thinking about from where those four to five guys started from in an Australian bar to where we are now, it’s very representative about the foundation and the goals itself.”

Seibel is proud of his teammate, who has motivated him to set the fundraising bar high.

“Christian dominates Movmeber,” Seibel said. “He’s always up there raising money and I just try to catch up to him. This year, I have upped my goal from year’s past.”

The Savage Cavemen have spread awareness by word of mouth and through social media. The key for their success is how relatable the cause is to a person.

The lacrosse team was able to take that message away from a conference they had with a member of the Movember foundation, Doug Prosoff.

“They key thing for me and how I fundraise and the message I took from the guys at Movember is just to be relatable,” Cucinello said. “That’s been the mantra about how our team has attacked this fundraiser and we credit that to why we have been so successful to this point.”

Through this fundraiser, the camaraderie of the team has grown significantly.

“It’s definitely cool that the team has something to bond over together,” Seibel said. “Whether you’re great or not great at growing a mustache, it’s something that’s not lacrosse related that can gather the team together.”

“Everyone on the team has been touched by it or relation to it,” Cuccinello said. ”It might be different from guy to guy, but at the end of the day, we are working towards that common goal to raise money as a unit for something that is greater than ourselves.”

Cuccinello has spread awareness to schools in the BIG EAST, Syracuse, Duke and Connecticut College, who are participating in the fundraiser this year, too.

“I hope that someday in the future, the way the pink ribbon is synonymous with breast cancer, the mustache will be synonymous will men’s health issues,” Seibel said.