Football falls to Elon in tight contest on homecoming 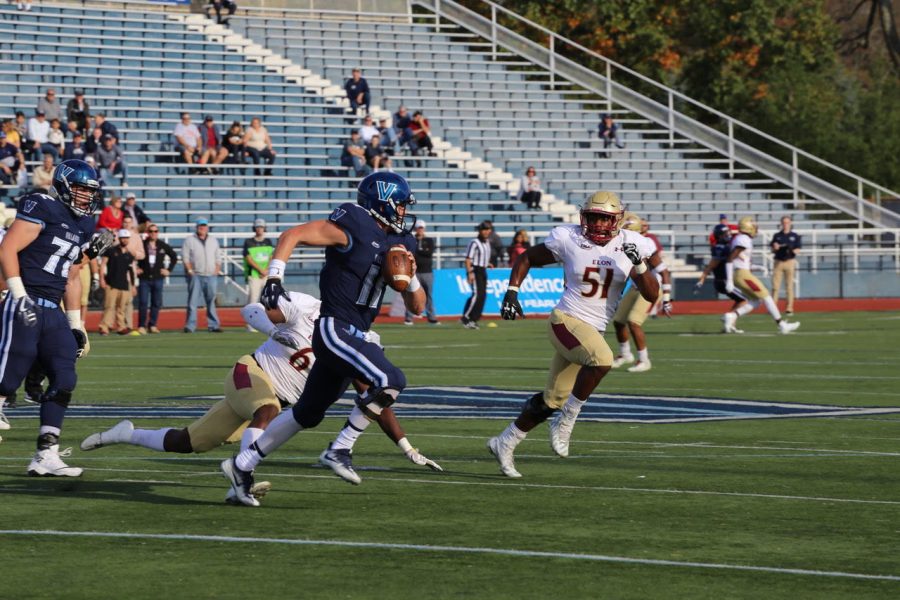 Homecoming did not go as planned for the Wildcats this past Saturday Oct. 28, as they dropped their second straight game, this time to the 10 ranked Elon Phoenix, 19-14.

The story of the game was field position, as the Phoenix punter Hunter Stephenson pinned the Wildcats inside the 20 with all 4 of his punts. Due to this field position struggle, the offense failed to get things going, and amassed only 249 total yards in the game. Freshman Kyle McCloskey, in his first ever start, completed 9 of his 20 passes for 137 yards, and rushed 19 times for a team-high 83 yards.

The Wildcats’ first touchdown was set up by a 26-yard interception return by sophomore cornerback Dage Davis, that led to a 42-yard bomb from McCloskey to junior running back Aaron Forbes. Their second score came off of an Elon kickoff going out of bounds, which allowed the Wildcats’ drive to begin at the 35-yard line. The drive was topped off late in the third by a 24-yard reception by runningback Taurus Phillips, as McCloskey tossed the ball while being pursued by the Phoenix pass rush.

On the defensive side of the ball, the Wildcats’ prowess against the run continued. The Wildcat defense, led by the 11 tackles of both senior safety Rasaan Stewart and junior linebacker Jeff Steeb, held the  number two ranked rushing offense in the CAA to only 3.2 yards per rush. However, Elon’s freshman QB Davis Cheek responded to the weak rushing attack by completing 24 of his 35 passes for 357 yards and two touchdowns.

Cheek’s favorite target on the day, true freshman Kortez Weeks, reeled in 11 receptions for a total of 205 yards. Most of these receptions came out of the slot on seam routes across the middle, including a 49 yard reception to set up a nine-yard touchdown pass to sophomore running back De’Sean McNair.

A fourth quarter touchdown pass to sophomore wide receiver Tre Marsh and a late field goal by freshman Owen Johnson gave the Phoenix the lead to which thye held onto thanks to a Wildcat turnover on downs and 69 fourth quarter rushing yards to seal their seventh straight victory on the season.

Freshman Kyle McCloskey looks to be the future of this Wildcat team. Coach Mark Ferrante said in the post-game press conference that he is proud of the grit, toughness and competitiveness that McCloskey brought to the game today,  and McCloskey himself said that he can look to improve with more playing time, especially with regard to going through all his reads and knowing when to remain in the pocket.

Next up for the Wildcats, seventh placed Richmond.