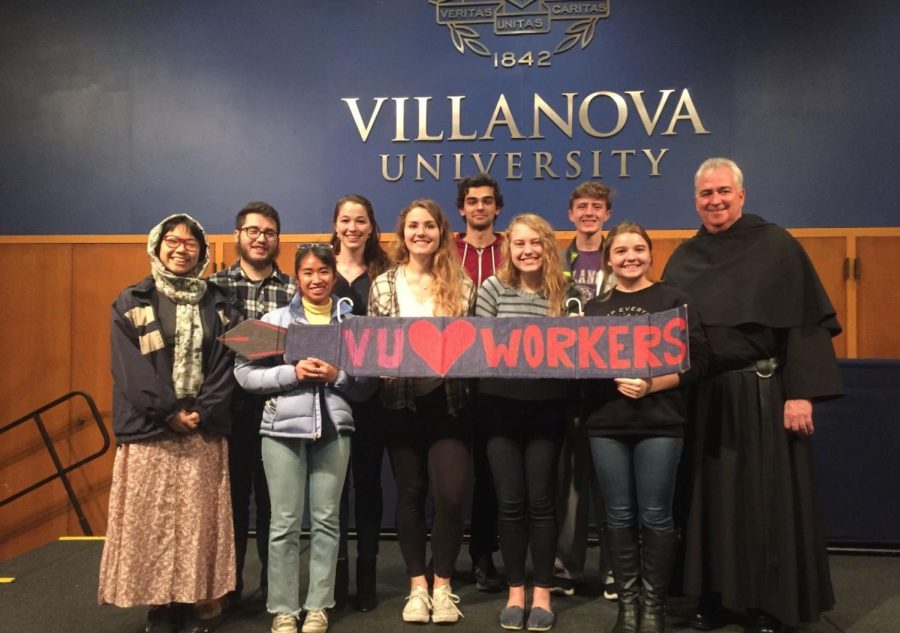 Courtesy of Villanovans Against Sweatshops

Dr. Kline opened the lecture by highlighting the severity of sweatshops and said there are 48,000 violations in factories every year. Some workplace grievances include verbal and physical abuse, wage theft, denial of sick leave and excessive overtime. Due to sheer volume, it is difficult to monitor all factory violations, and brands cannot always be trusted to put into place a proper monitoring system on their own. For example, Nike did not want to partake in Georgetown’s Code of Conduct for licensees. Instead Nike wanted to create its own code and its own system of monitoring.

After refuting the claim that sweatshops are necessary and testifying to the effectiveness of student action, Dr. Kline detailed his involvement in Georgetown’s recent victory over Nike.

Due to a globally coordinated two year campaign led by United Students Against Sweatshops (USAS) and 10 participating garment worker unions around the world, Georgetown and five other universities severed licensing contracts with Nike. The pressure forced Nike to sign a landmark agreement ensuring factory access for the Workers Rights Consortium across their supply chain, and so far Georgetown and University of Washington Seattle have ensured this to be legally binding within their licenses.

However, according to Dr. Kline, a strong part of the solution to sweatshops is students, specifically those who organize  in solidarity with workers. After workers in a collegiate Vietnamese Nike factory went on strike over labor abuses, Georgetown student athletes with USAS Local 9 covered the Nike logo on their shoes with tape, which attracted media coverage and sparked action. As part of a collective global campaign with USAS, Georgetown USAS Local 9 created petitions, organized rallies and occupied the President’s office until the contract was cut. It is because of the tireless actions of students and workers that even the world’s largest brand was forced to comply with internationally recognized labor standards.

Following Georgetown’s lead as well as that of dozens of USAS locals, VAS demands that Villanova make Nike sign labor standards, pairing protest and promotion. Most recently, on Nov. 20, 11 VAS members demanded answers from Father Peter at the Town Hall hosted by Student Government Association. This semester, VAS members organized mass call-ins, a vigil and mobilized the support of the SGA, Faculty Congress, and the broader campus community in an effort to hold Nike accountable in the Villanova licensing agreement as well.  Fr. Peter informed the audience that Villanova will be making Nike sign labor standards, which will be a first in Villanova’s history. The contract will include the same language found in the public licensing contract with UW Seattle, which over 250 Universities can now employ as a template.

This is a significant statement on behalf of our President, and VAS members look forward to the implementation of legally binding language protecting worker’s rights. In addition, VAS supports the increase in orders from Alta Gracia.

Dr. Kline highlighted Alta Gracia, a productive, sweatshop-free factory that pays a living wage and ensures worker protections unlike no other. Founded by USAS, labor groups and workers over a decade ago, Alta Gracia’s existence is a challenge to global industry and a testimony to the possibility of a more ethical future for the global supply chain. Georgetown has been sourcing its Orientation t-shirts from Alta Gracia for the past three years, and VAS is currently trying to increase Alta Gracia orders for Villanova campus wide.