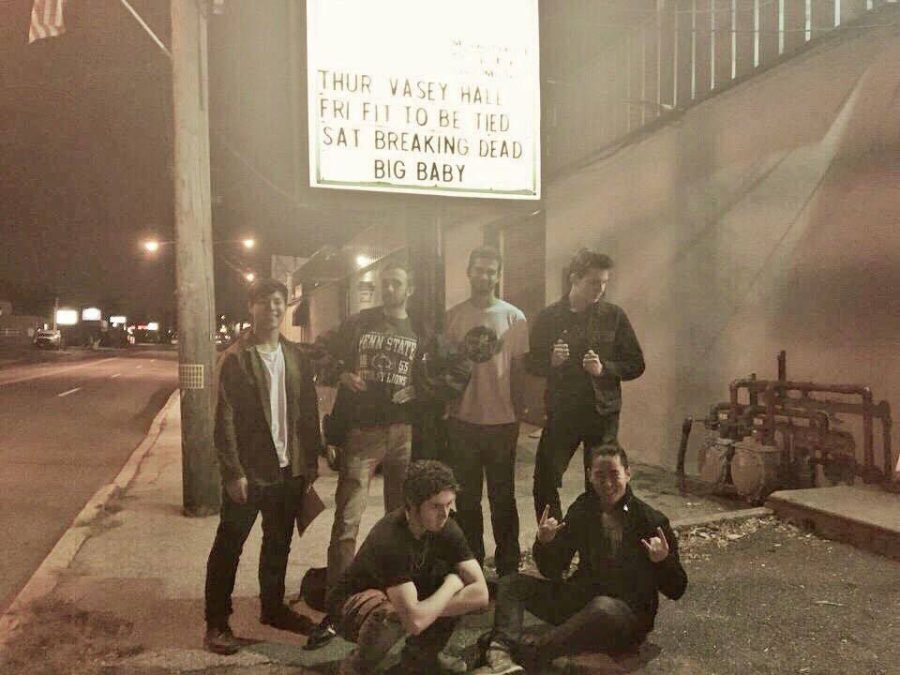 Despite its excellent reputation for academia, philanthropy and athletics, the University’s art scene has always flown under the radar. For the most part, musical opportunities on campus are limited to the band, jazz band, choral groups and pastoral musicians—these established organizations have long been the go-to for anyone looking to exercise their musical muscles. Yet in recent years, some passionate individuals have been making waves by breaking from tradition. Deep in the basement of St. Mary’s Hall, dimly-lit practice rooms are serving as incubators for a number of fully autonomous student bands.

On a recent Thursday, Villanova students filled the tables at a small bar in Havertown.  They were there to see Vasey Hall, a six-member rock band conceived by, and comprised of, University undergraduates. Though only a few months old, the group has already attracted a following of fans that admire their classic-rock sound and style.

On a recent afternoon, I sat down with drummer John Quimbo and guitarist Casey Rabito to talk about the birth of their band. Vasey Hall began last year as a low-key collaboration between Quimbo, bassist Aidan Riess and vocalist Ray Jho. In early September, Quimbo was on his way to rehearse with his fellow band mates when Reece told him to make a detour. The bassist was jamming with two other guitarists—Casey Rabito and Joe Asprea—and wanted Quimbo to meet him there.  “I was like, ‘who are they?’” he says, recounting the story, “but I came through and realized damn, they’re pretty good guitarists.”

To hear Quimbo tell it, it was as though fate itself had brought them together. “We kind of clicked, just started playing, improvising stuff. And then Ray comes in, and he’s like, ‘dude, ready to practice?’ And I said, ‘nah come to the practice room, I’m playing with two random musicians. I didn’t even know everyone’s name, they were like complete strangers!” Yet within minutes of their first group session, the energy between the musicians was palpable. With the addition of Victor Pavao, an extremely talented piano player often found at the keys in Connelly Center’s cyber lounge, the group was off and running.  “The chemistry is so big in this band,” Quimbo says. “In the other bands that I’ve [been a part of,] it wasn’t quite the same. We had no idea where everyone else in the band was at a given time in our jams—just the lack of communication was so obvious. But in this band, I know exactly when Aiden switches and I’m like I’m switching now. And then Casey looks over and he’s like ‘alright John’s doing this, I’m gonna do this now.’”

This synergy has made Vasey Hall’s free-flowing, improvisational style extremely effective. At the Havertown concert, which was its first live performance, most of the numbers were improvised live on stage. “We practiced a lot,” recalls Rabito, “but a lot of it we came up with on the spot. The covers, we got those down and we had a certain way we wanted to do them.” But even within those covers, which included Led Zeppelin’s “The Ocean,” Soundgarden’s “Black Hole Sun” and “Come Together” by the Beatles, Vasey Hall improvised every solo. Rabito becomes animated as he remembers the audience’s reaction. “We had insanely long solos that people were like, what the heck. ‘There’s no way that was on the spot!’”

Yet it was—and given the combined musical experience shared by members of Vasey Hall, their aptitude for spontaneous harmonization is unsurprising.  Rabito, who hails from Ardsley, New York, began studying music at the age of six. Both he and Quimbo started their education on piano, although the now-drummer was never a big fan of the instrument. While Rabito continued with piano even after adding trombone into the mix, “I didn’t really like it,” says Quimbo, of Woodcliff Lake, New Jersey, “so for a while I wasn’t playing any music at all.”  That changed when, at the age of eleven, Quimbo’s mother bought him his first drum set. “It was like, a really crappy $200 set off of Amazon,” he said. Yet his passion for music was rekindled. “I would play it for like, hours, and my mom would yell at me because it was so loud, and I’d wake my brothers up.”

By seventh grade, both boys had picked up the guitar, Quimbo as a result of his older brother’s instruction and Rabito out of sheer curiosity. “I kinda just picked up the guitar when I was 13 or 14,” he shares, “and I’ve never had an actual guitar lesson. I just applied what I learned from playing to the piano to the guitar. If you play enough, you’ll get good.”

Switching from acoustic to electric guitar accelerated Rabito’s learning curve as he discovered his true passion.  “Acoustic is a lot harder than playing an electric guitar, because your fingers have to be a lot stronger,” he says. “When I got my first electric guitar I was like whoa—it was like butter. And I just started shredding.”

This symbiotic relationship between human and instrument is one reason Vasey Hall clicks so well. As Rabito states, “Everyone’s instrument is a perfect fit for them. It works out really nicely.” Quimbo is particularly enthusiastic about this band’s cohesion, given his prior experience. “In high school I played in two bands,” he recounts, but they already had a drummer. Instead, he found himself coerced into the role of bassist.

Constantly itching to get his hands on some drumsticks, Quimbo never felt particularly at home in those bands. Even in Vasey Hall’s original lineup, Quimbo played guitar, a role in which he’s decidedly less comfortable. That’s what makes the current setup so ideal. Drumming, he says, is “just more fun for me. I’m just naturally a drummer. The energy I put out playing the drums? I can’t match that same passion on another instrument.”

Rabito is equally fervent about his love for guitar and plays a Fender Telecaster affectionately referred to as “Shelly – because it’s eggshell white.” A sophomore, Rabito went to high school with senior Asprea. “We were great friends in high school,” he says.  “We would play guitar all the time when we were younger.” And now that Vasey Hall gives them both a chance to shred, the two can play off of a long-standing dynamic. “There’s a lot of back and forth that happens with guitar,” Rabito declares. In a six-man band like Vasey Hall, it’s easy for instrumentalists to conflict musically, making this successful assignment of two well-matched guitarists all the more important. “We all are quick on our feet, so we can pick up on what each other are doing and [better] communicate.”

Quick thinking is vital to energy of the band’s live performances. But as Vasey Hall begins work on its first album, it has the chance to slow down. A time-consuming process that may last all year, the group has only made it halfway through composition of its first song. As full-time students with additional extracurricular commitments, finding time to rehearse and record is perhaps their biggest challenge.  They usually get together on weeknights or Friday afternoons, refitting the Jazz Band rehearsal room to serve as their studio. Both Rabito and Jho have recorded music in the past with different bands, and so bring some studio experience—and equipment—to the table. For 20-year old college students, their self-motivation is impressive. Basically, Rabito says, it’s all about choices. You prioritize what you love. “Instead of watching Netflix and twiddling our thumbs, we’re jamming out.”

The process of songwriting for Vasey Hall is “completely collaborative”. They start with a jam and refine the melody from there. This is not to say the group is without purpose in their composition. Their debut album has a definite theme. It’s “kind of [about] being stuck in an endless loop,” Quimbo says, inspired by all the mundane aspects of life that everyone has to (but no one wants to) confront.  In terms of tone, the group seeks to tread the line between upbeat and moody. “We combine those two elements as much as possible,” Rabito says. Dynamics are important in songwriting, and their tracks “go from fast and intense to quiet and relaxed.”

When it comes to inspiration, the band lists a slew of influencers. Red Hot Chili Peppers, Led Zeppelin, “just classic rock in general. As far as drumming goes, Chad Smith and John Bonham,” Quimbo smiles, “I adore them.”

“I don’t even know where to start,” Rabito reflects pensively, “Since I was a kid I’ve been listening to the Beatles religiously. Like, I can say any lyric to any Beatles song. I [expletive] worship them.”

“Of course then you have heavier groups in the 70s, getting more experimental. Right now I’m into more progressive rock like Yes, Genesis, Rush. There’s just so many. I could go on for days listing my influences,” Rabito concedes, although he cites Led Zeppelin as being nearest to Vasey Hall’s current sound.

When asked what one person—alive or dead—they’d choose to have in their audience, Quimbo and Rabito fire off a list of names, the first of which is Morgan Freeman. Also among their wishful attendees are George Harrison and “Freddie Mercury, so he could sh** on us.” For a final answer the group settles on Omari Spellman, deciding that it would be manifestly cool to have a basketball player in the crowd. If future performances are anything like their first, however, Vasey Hall might not even spot their idol among the packed audience. Rabito puts turnout at 35-40, an impressive number for a fledgling student rock band. “I was surprised how many people showed up,” he says. “It was a lot of fun.”

Their next live event is planned for the first weekend after break, on a Friday or Saturday at their classic venue – The Rusty Nail in Haverford. The group has also recently established a social media presence, with a Facebook page featuring short clips and information on upcoming gigs.

As our interview draws to a close, I ask the band members if they’d like any final words on this piece. After some thought they decide on a simple quote: “Hey, hey, my, my, rock ‘n’ roll can never die.” As the band members start laughing, Rabito puzzles over the quote’s author. “Who’s that again?” he muses. “Steven Stills? Graham Nash? David Crosby?”

It’s Neil Young. There’s a phrase often said in reference to technology—that we stand on the shoulders of giants. The case is no different for the music world. And as I heard the group recite lyrics from a song nearly 40 years old, the thought crossed my mind: disciplined, knowledgeable, talented and motivated, this band is the real deal. Maybe one day a group of college students will be quoting Vasey Hall, formed 2017, Villanova University.