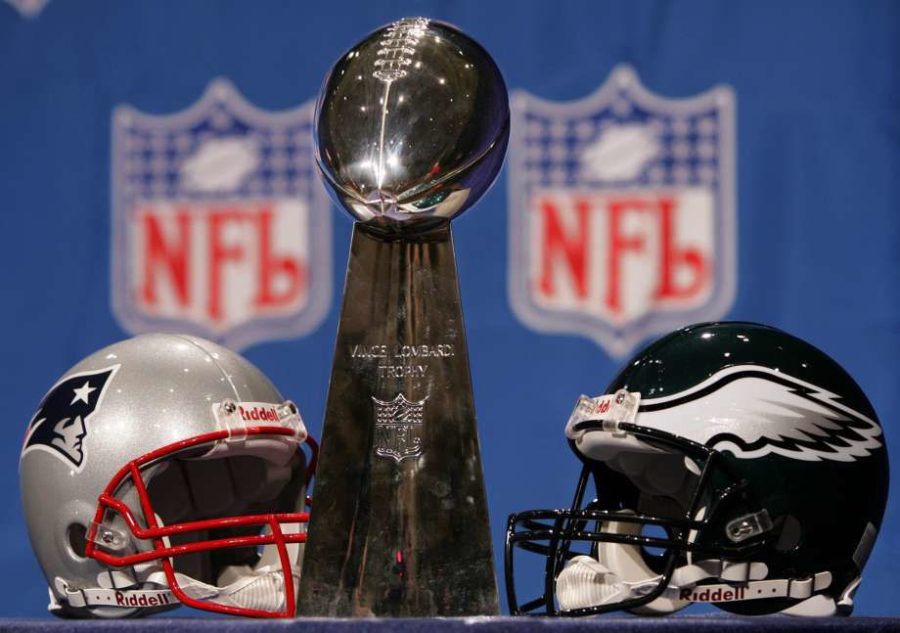 As February approaches so does the biggest  game in the NFL, the Super Bowl. Whether you watch the game, halftime performance, or come to the party for the snacks, the Super Bowl is an annual American pastime that brings people together. The game is such a large event that petitions have been signed to make the following Monday a national holiday, to no avail.

This year’s matchup features the New England Patriots and Philadelphia Eagles. This is not the first time they’ve met on the big stage, as these two teams also faced off against each other in Super Bowl XXXIX, with the Patriots taking home the Lombardi Trophy by a final score of 24-21. In 2005, the Eagles were led by star players such as Donovan McNabb, Terrell Owens, Brian Dawkins and Villanova’s own Brian Westbrook. Although faces have come and gone for both teams since then, one constant remains, the head coach/quarterback duo of Bill Belichick and Tom Brady for the New England Patriots.

Both teams faced interesting paths on their quest to Super Bowl LII.

Out of the NFC, the Philadelphia Eagles (13-3) will make their third Super Bowl appearance in franchise history and are still are seeking their first Lombardi Trophy. The Birds got off to a spectacular start riding the hot hand of second year quarterback Carson Wentz. All was looking bright for Wentz and the Eagles as they held a 10-2 record heading into Los Angeles, when the season took a turn for the worst. On a quarterback scramble late in the game, Carson Wentz was hit below his waist and suffered a torn ACL, ending his 2017 campaign. Now in his second stint with the Eagles, Nick Foles was thrown into the game and led the team to a victory over Los Angeles 43-35. Foles started for the Eagles final three games. While he helped lead the team to a 2-1 record, he played inconsistently down the stretch.

Although the Eagles possessed home field advantage and the number one overall seed in the conference, they were considered underdogs in their NFL Divisional Round matchup versus the Atlanta Falcons. In a hard fought game, the Eagles came out on top 15-10. Following the game, a variety of Philadelphia Eagles players wore dog masks, making fun of the “underdog” tagline given to them by the media. Following this victory, the Eagles faced the Minnesota Vikings in the NFC Championship and won 38-7. Foles was unstoppable as he went 26-of-33 for 352 yards, three touchdowns and zero interceptions.

The Philadelphia area has been ecstatic that the Eagles are heading to the Super Bowl as the energy can be felt throughout the Main Line. After the NFC Championship game, many students on campus could be seen wearing Eagles green. Not only does the location of the team have a connection to Villanova, but also a member of the team. Chris Long is set to play in his second Super Bowl in a row, last year with New England and this year with Philadelphia. He is the son of Villanova football legend and current Fox sports analyst Howie Long, who recently made a large donation to the University.

On the other side of the league, the New England Patriots (13-3) make their second consecutive Super Bowl appearance, and eighth in the Bill Belichick/Tom Brady era. The Patriots have established themselves as a dynasty, winning five Super Bowls since 2002, and are consistently a top team in the league.

The Patriots defeated the Atlanta Falcons in one of the best Super Bowls in recent memory last February. Being down 28-3 late in the third quarter, the Patriots staged the largest comeback in Super Bowl history as they defeated Atlanta 34-31 in OT.

Led by Tom Brady, Rob Gronkowski and Brandin Cooks, the Pats boasted one of the top offenses in the NFL this season. After a slow start defensively, the Patriots turned things around and finished as a top ten overall defense. At 40, Tom Brady continues to defy age as he had an MVP worthy season. Brady led the league with an astounding 4,577 passing yards on the season. He also tacked on 32 touchdowns with only eight interceptions, leading to an impressive 102.8 passer rating.

The Patriots faced the Tennessee Titans in the AFC Divisional matchup and routed them 35-14. In the AFC championship, the red hot Jacksonville Jaguars and New England Patriots played a game for the ages. Jacksonville led for the majority of the game and even held a 20-10 advantage late in the fourth quarter. However, just as they did last year, the Patriots mounted a clutch comeback and won 24-20.

It’s a very enticing matchup as one of the league’s top offenses, the Patriots, faces a stout Philadelphia Eagles defense. The Patriots are favored heading into Sunday, but the Eagles do not appear to mind being considered “underdogs” yet again.

The quarterback matchup is interesting as Foles’ sixth start of the season is the biggest of his career. On the other hand, Brady holds the clear advantage when it comes to experience of playing on the big stage. This also goes for both head coaches, as Philadelphia’s Doug Pederson is only in his second year as head coach in the NFL. On the other hand, Bill Belichick has been coaching New England since 2000, winning five Super Bowls. The Eagles and Patriots both have weapons on the ground and in the air, which should make for a great game. Interestingly enough, both teams’ leaders in receiving yards are their tight ends. Rob Gronkowski, arguably the best TE in the league, led the Patriots with 1084 receiving yards. Zach Ertz led the Eagles with 824 receiving yards, and both tight ends had eight respective touchdowns on the season.

Regardless of the outcome, this year’s Super Bowl should be an exciting affair between the NFL’s best.