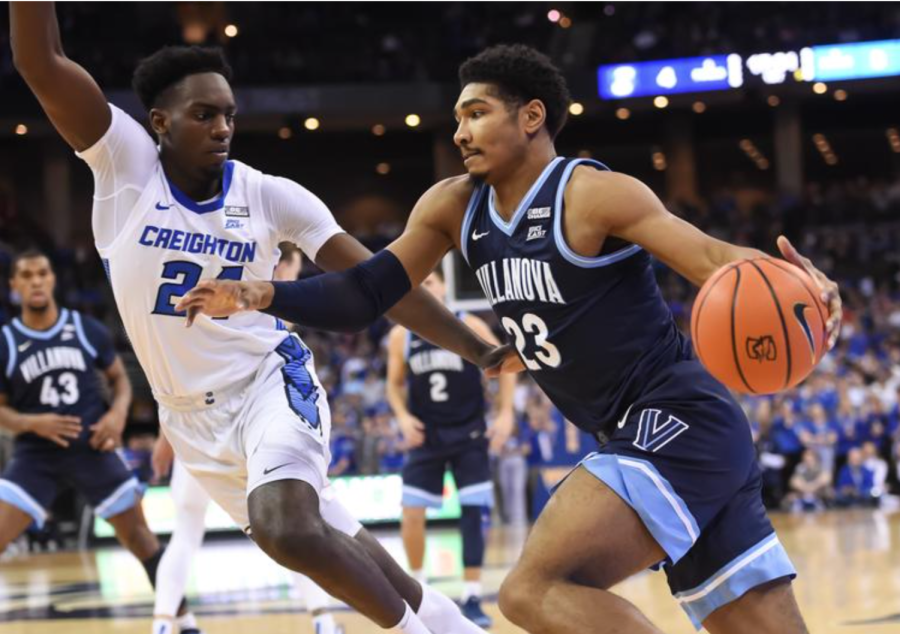 OMAHA, Neb. — In its Big East opener, Villanova dropped its second consecutive game and fourth of the season, falling to Creighton 79-59 at the CHI Health Center in Omaha, Nebraska. The Bluejays outshot the Wildcats throughout the game, shooting 51% in the second half and 55% in the game, while Villanova shot just 30% from the field in the second half and a horrific 8% from three.

Senior forward Ryan Hawkins led Creighton in scoring with 19, while graduate guard Collin Gillespie led Villanova with 16. The story of the game was the 18-point difference in the paint, as the Bluejays scored 42 points in the paint to the Wildcats’ 24, and in the 16-point difference from the bench, as the Wildcat reserves combined for just six points.

“Every guy, individually, is trying to get us going and we are kind of losing our rhythm offensively,” Villanova head coach Jay Wright said. “We have to learn from this and we have to get that offensive rhythm back.”

Villanova entered the game reeling after putting up the worst shooting performance of Wright’s tenure against Baylor. They shot 22% from the field and 22% from three en route to a 57-36 loss, dropping three spots to #9 in the AP Top 25 poll.

Creighton entered the game after having their worst loss of the season to Arizona State and were looking to bounce back and beat their second top 25 team this week (#24 BYU).

The first half went back and forth for the most part. Creighton hit its first two buckets, before Villanova rattled off eight straight points to take the lead. The teams traded points, as Creighton led in rebounds and Villanova led in forced turnovers, but after a Gillespie three-point play to make it 25-24, Creighton went on a run.

Creighton used its bench and Hawkins to go on a 9-2 run and take a 35-26 lead. Redshirt sophomore forward Eric Dixon would score the next four points for Villanova, but Creighton answered back to make it a 39-30 game going into halftime.

The story of the game at halftime was more of the same for Villanova, as the Wildcats hit three of their last 15 shots in the period, while Creighton hit seven of its last nine. Hawkins led all shooters with 10 points, while Gillespie and Dixon led Villanova with eight each.

Villanova shot 37% from the field and 28% from three-point range in the half, while Creighton shot 56% and 45% from three.

Villanova started the second half strong, closing the Creighton lead to 45-40 behind multiple shots from both Gillespie and Dixon. Creighton was able to answer, extending the lead back to 10 with a 7-2 run of their own.

Villanova responded with a 8-3 run with three straight drives to the lane, but missed several opportunities to close the gap further.

With seven minutes remaining, Villanova trailed by just six, largely because of dominance on the offensive boards, with six in the early stages of the second half. The Wildcats had 13 offensive rebounds in the game, including five from Dixon.

The Wildcats would get no closer. After a Villanova timeout, Creighton poured it on, going on an 8-0 run to extend the lead to 14. Freshman guard Rati Andronikashvili had five of the eight points in the stretch, and sophomore center Ryan Kalkbrenner, Creighton’s 7’0” big man, had two blocks on the defensive end.

At the four minute timeout, Creighton held a 69-57 lead. Villanova made only one three in the half, and while their perimeter defense improved, the Wildcats allowed several easy drives to the lane. Villanova missed its last 15 shots and Creighton closed the game on a 23-5 run to come away with the 79-59 upset.

“I thought in the second half, we were not playing ball screens well, we didn’t play the post well and they took advantage of that,” Wright said. “So, I think they are smart offensively. When you make mistakes, they take advantage of it.”

Not all was bad for the Wildcats, however. After spending several weeks on the sideline, junior guard Bryan Antoine made his first appearance of the season, playing nearly seven minutes off the bench.

“We have to bring him back gradually. He’s only practiced a few days,” Wright said, “I thought he gave us good minutes and he’s got a lot of ground to make up, but it gives us some depth.”

Villanova drops to 7-4 for the season and will most likely fall a long way in the rankings, while Creighton improves to 9-3 and could move into the top 25.

Next, Villanova will try to end its losing skid and offensive struggles, traveling home to take on the new and improved #22 Xavier Musketeers (10-1). Creighton heads north to Chicago to face the 9-1 DePaul Blue Demons.